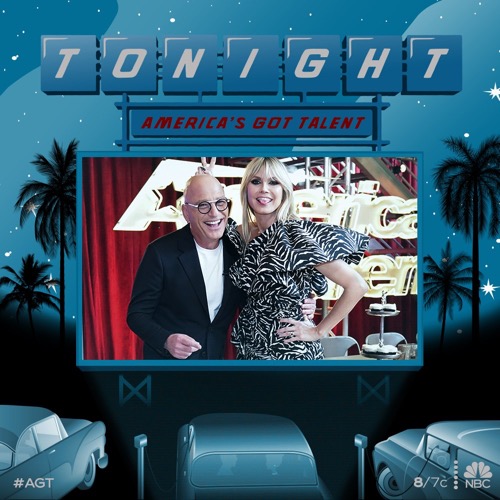 Tonight on NBC America’s Got Talent begins with an all-new Tuesday, July 28, 2020, episode and we have your America’s Got Talent recap below! On tonight’s AGT season 15 episode 8 “Judge Cuts″, as per the NBC synopsis, “The judges review their favorite acts from the auditions and reveal who proceed to the live shows. Ten acts are chosen to perform remotely and five of them will advance for a chance to win $1 million.”

Tonight the judges are going to have to eliminate nearly half the acts that made it through. The judges watch act after act again to help make their decision.

The judges visit Selina via video from her home to give her the good news that she is going to go to the live show. Judges Simon Cowell, Heidi Klum, Howie Mandel, and Sofia Vergara have the top job of making the decision of who to put forward.

Celina Graves, a singer, finds out that she has made it through to the live shows and she is absolutely thrilled. Also, Kelvin Slings, Kameron Ross, and Feng E make it to the live shows. That is not all, Spyros Brothers, Daneliya Tuleshova, Annie Jones, Bad Salsa Group, and the Bello Sisters all make it through. Contortionist Noah Epps and the Double Dragon Twins who danced their way through the AGT stage, also make it through.

Ariel acrobat Alan J Silva made it through, he soared across the judges with his talent. There was one guy, who Sofia pulled a sword out of, Brett Loudermilk, he made it through as well. And, there will be lots of laughter on the live shows because Alex Hooper, Usama Siddiguee, and Michael Yo also made it through. There wouldn’t be AGT live shows without Bonavega, one of Heidi’s favorites Pork Chop Revue and Vincent Marcus, they are all going through to the live show.

Everyone loves Archie Williams, who was wrongfully imprisoned for 36 years, and so does AGT, he is going through and Simon tells him again that it is an honor to have him on the show.

Ten acts are going to perform again for their chance to get into the live shows, there are only five spots. Simon and Maria are salsa dancers and they are up first, they want to be the first kid dancers who win AGT. The judges and Terry love it. Heidi says she loves them and this time they were better than last time. Sofia agrees and she loves their outfits that were made in Columbia. Howie says there just a few spots. Simon asks them what it means to them, Simon says it is their dream. Simon says it is a better routine than the first time.

Hula-hooper Craid Reid is next, he says he has put together something bigger and faster, and he does it. Sofia says that was fun and she would love to do it. Heidi says that is really hard and you need to have a lot of talent. Howie says he looked like he was in a giant slinky in the end. Simon says he is a born performer, it was just fun.

Max Major is at the MGM in Las Vegas with an incredible view of the strip. Since he can’t be there physically with them on the stage, he is going to try and connect with them mentally. He does a card truck with Simon, and he is super stunned and impressed. Simon walks up to the screen and virtually high fives Max, he says it is unbelievable. Simon says this was not planned and the most astonishing thing he has ever seen. Howie says you have to be astonishing to move forward and he hopes he gets the chance to move on. Sofia says he was spectacular and very hard to beat.

Shaquira McGrath is next, she is a waitress at the Atlanta Braves stadium who loves to sing. The judges love it. Simon says he wishes she saw what she did, she lit up the screen and commanded it – she has a special talent. Heidi says to her, she is a country star. Sofia says it was spectacular and her voice is great. Howie says she is making their job tough.

Ty Barnett has dreamed of being an entertainer, he says he is not perfect, but he has always tried to be a great dad. Ty performs in front of his garage to a handful of people social distancing with masks on. Heidi says he is very funny and likable person. Howie says it is hard to deliver what he did. Sofia says she had laughs, but she laughed more on the other stage. Simon says he agrees, he thinks he was nervous, but the world needs cheering up right now and that is what he did.

The Brothers Gage are next, they are teenage harmonica players. This time they are doing a cover to a very popular song, Party Rock Anthem. Howie says he was never a fan of the harmonic until these guys came on the show. Sofia says they make it kind of sexy. Simon asks if singing is going to be part of their act, they say yes. Simon says they didn’t look too confident singing.

Nolan Neal is beyond grateful to have a chance to make it to the live shows. Howie says he has a great sound in his voice that stirs people emotionally. Simon says he made the song his own and he made it current – and he made their job hard in the most positive way. Sofia is going to fight for him to make it forward.

Ryan Tricks is a mentalist and the main reason he is doing this is to give his kids a better life. Alesha Dixon joins Ryan for his performance. It was cool what he did. Howie says he enjoyed this a lot more this time around. Sofia thought it was amazing, and how he commanded the stage. Simon says his showmanship was superb, there is an air of mystery around him.

The Ninja Twins say they are feeling the pressure and it’s on. Simon looks more shocked at this time that he did in their first performance. Howie is full of big belly laughs. Heidi says it is infectious. Sofia says she doesn’t know what they are, but they are super entertaining. Simon says it was so bonkers, so crazy that he actually liked it, he thinks they are hilarious. Howie says the question is are they yummy enough to move on.

Jonathan Goodwin is the Daredevil and he has loved dangerous acts since he was seven years old. This is one of the most dangerous acts he has ever attempted. His act is blindfold chicken with crossbows. Heidi says that he is completely nuts. Sofia says it would have been horrible if he was shot, but it was fun. Howie says don’t try this at home. Simon says one of the nuttiest and dangerous acts they have ever seen and he will be fighting for him to go through to the next round.