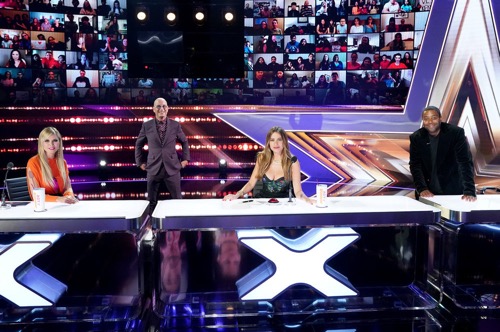 Tonight on NBC America’s Got Talent begins with an all-new Wednesday, August 19, 2020, episode and we have your America’s Got Talent recap below! On tonight’s AGT season 15 episode 14 “Results Shows 2″, as per the NBC synopsis, “Five acts from the previous night’s show will move on to the semi-finals round of the competition. Viewers will have one last chance to send their favorite performer of the night into the next round.”

The eleven acts join Terry Crews on stage, tonight they will find out their fate in the competition. The top three acts from last night will go into the semi-finals. In no particular order; Alex Brownley and the Puppy Pals, Jonathan Goodwin and Spyros Bros. are called forward. America can save one of these acts, they need to vote so their favorites make it to the semi-finals – this is the Dunkin Save. Howie says this is apples and oranges, the acts are completely different.

Jabbawockeez, a hip-hop dance crew who got their start on season 2 of America’s Got Talent in 2007, perform.

Vincent Marcus and BAD Salsa are asked to step forward. America has voted, the next act going into the semi-finals is BAD Salsa. This is the end of the road for Vincent Marcus.

Darci Lynne is a singing ventriloquist act from season 12 of America’s Got Talent, who is the youngest person ever to win, and tonight she returns to entertain us.

Howie gives us a tour of the Universal Studios backlot.

Time to get the results for the Dunkin Save, Alex Brownley, and the Puppy Pals, Jonathan Goodwin and Spyros Bros return to the stage. Spyros Bros wins and makes it through to the semi-finals. Heidi says they are real champions, and she is happy for them. There is only one spot left, the judges get to decide if Alexis Brownley and the Puppy Pals of Jonathan Goodwin makes it through.

One last result, Kenan chooses Alexis and her dogs, Sofia tells Alexis that she is amazing – but her vote goes to Jonathan, Heidi says it is never easy to make this decision – she goes with her gut and it is Jonathan, Howie tells Alexis that he knows how much this means to her and he chooses her. It is a tie, but based on America’s vote, Jonathan Goodwin goes forward.