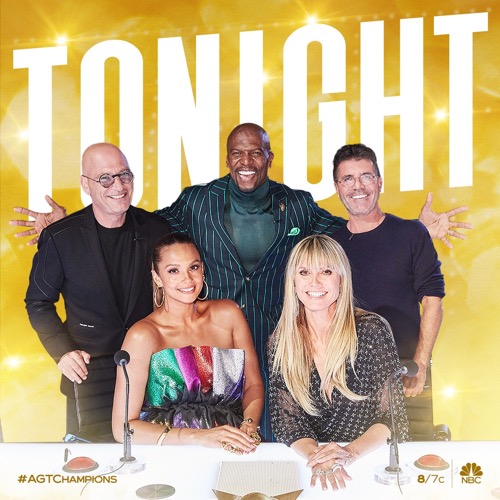 Four of these renowned acts will advance – two will be voted through by a panel of “AGT” Superfans, one will be the Judges’ Choice, and one will receive a Golden Buzzer to perform in the finale.”

The last ten acts fought for their place in the semi-finals. First up was Christian Stoinev & Percy. They were a Hand Balancer & Dog Tricks Act and people might remember him from when he used to do the show with his dog Scooby. Scooby was up there in age now. He’s since retired and so Percy was introduced as the new star. Percy was just as good as Scooby and he kept up with Christian the whole time. It was a great act and it was an improvement over the last time they saw Christian. Christian had tried to do activities without the dog and it hadn’t been as good.
Thankfully, he knew better this time. Christian upped the game with his dog and the crowd as well as the judges loved it. Next up was Voices of Service. They were a Vocal Group comprised of former servicemen and women. They had turned to music in the darkest hour and it helped them heal. They now perform as a means of spreading their message. They wanted people to see that there was life after deployment and they were back now trying to do better. They came in fifth place last time on AGT and they wanted to placer higher this time.
The Voices of Service performed Kodaline’s “Brother” which was so on tune with their message that it had been a perfect fit for them. They had moved everyone with their song. The judges had loved it and even Simon said it made him emotional. It really was a great act. Next up was JJ Pantano. The seven-year-old Comedian was just the cutest. He came out in his little suit and everyone expected he would be adorable, but they didn’t know how brutal he would be. He ripped into the judges and he openly mocked them.

JJ held nothing back. He was a riot and everyone loved him including the same people he made of. His accent was also the cutest thing. JJ was Australian and it was fun hearing this little human with a cute accent just out there having fun. Next up was Emil Rengle. He was sort of a controversial figure. He went on Romania’s Got Talent as an openly gay man and he received a lot of flak for that. There were some that didn’t think he should be allowed to compete. It wasn’t that long ago they were a soviet country and so they hadn’t been fully prepared for someone like Emil.

Emil was flamboyantly himself. He held nothing back and he was a Dancer that performed in heels. Emil managed to hold on despite so many of the older generations coming out to denounce him and he won his season. Emil’s performance tonight hadn’t been everyone cup of tea because two of the judges had pressed their rejection buzzer. Only they weren’t the ones deciding if he stays or goes and so Emil stayed true to himself. He didn’t let what the judges said to get him down. And everyone else could be as half as lucky.

Next up was Silhouettes. Silhouettes were a Silhouette Dance Group and they were actually the first group of their kind on AGT. They didn’t win their season. They came in second and since then they’ve gone on to do great things. The kids from back then have all grown up. They were touring with superstars and still dancing and so Silhouettes was a great starting ground for them. The coach was teaching kids every day that anything is possible. The kids that performed tonight were just as good as the original and they told a very poignant story about how better everyone’s lives were with a pet.

Alesha was so moved by what she saw that she gave tonight’s performance a Golden Buzzer. Silhouettes are the first group from tonight going into the semi-finals and seeing as they were far from the last – it was to get on with the show. Next up Brian King Joseph. He was a Violinist diagnosed with neuropathy that sometimes made it hard to feel his own hands and yet he was great on stage. He was a wonderful showman. He livened up the crowd and everyone was excited to see Brian when he came out.

Brian performed an original song. He had lights and fireworks and it had been great. The judges all gave him a standing ovation. They wanted more of him and Simon also added how they haven’t seen the truly great talent he has hidden just yet. He says there still more there and he was hoping to see it at the semi-finals. Until then, next up was Connie Talbot. She was a singer and she was in the first season of Britain’s Got Talent. She didn’t have many teeth at the time because she was six and she still wowed everyone with her voice.

Connie also didn’t win her season. She came in second and then no one really heard from her because her parents wanted her to focus on being a kid. So, she was back now as a young adult ready to have that career. She performed an original song tonight and it was a hit. The audience loved it. They were all on their feet for her and even Simon loved it. He said he wanted to introduce her to an American audience for the longest time and that he wanted her to do an original song and so to have her do both tonight was great. Connie completely nailed it.

Sandou Trio Russian Bar went next. The Acrobats were great on their season of America’s Got Talent until they made the critical mistake of changing the format. They were acrobats and suddenly they changed that to a singing act. The woman sang on an upside-down piano and it had been bad. Her voice was not great. She later admitted to how bad it was and she’s since learned from her mistake. She now knows not to change up the format on the judges and she and her husband and brother-in-law have gone back to death-defying stunts as acrobats.

Their act tonight was pure terror. They terrorized everyone with their acrobatic maneuvers and it reminded everyone why they fell in love with this group in the first place. Sandou was great. The audience loved them and so did the judges. Next up were Bars and Melody. The Rapper & Singer duo was a great hit in Britain. They started out as kids and they quickly developed a following. They were also known as Simon’s first Golden Buzzer on Britain’s Got Talent and so they had a lot to live up to.

Maybe too much because they let nerves creep into their performance tonight. Bars and Melody were their usual selves. They were nervous and they looked nervous and they sounded nervous. The judges weren’t a fan of their performance tonight. It was actually a good thing that wasn’t the ultimate decision on who gets to go to the semi-finals and so it was up to the superfans to make their own decisions. And as for the last act of the night, that place of honor went to Strauss Serpent who was a Contortionist. He was so scary and yet he really was bending over backward to win and so “Africa’s Got Talent” was right to pick him as their winner.

Serpent was scarily good. It almost seemed like he didn’t have bones at one point and so Africa had a lead with him. It wasn’t even a surprise when it was later announced that Serpent was going int the semi-finals.