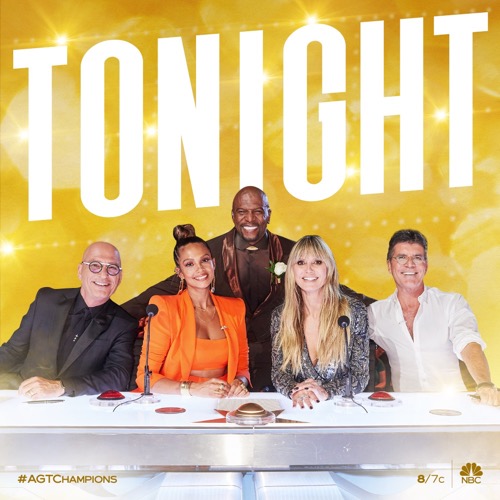 “America’s Got Talent: Champions” opened with a performance from the legendary rock band KISS! They came out in full makeup and everything. They also got the crowd going. KISS was great to watch and they also announced that they were carrying out their final tour. They wanted everyone to get tickets while they can! It was literally now or never with them! They’re here now and they’ll be gone tomorrow.

The rest of the show was about looking back. The judges went over everyone’s performance. They mentioned what they liked and what they hated. Their disagreements with each other were also shown because the judges don’t always agree with each other. They sometimes walked away from the same performance feeling two different emotions and there’s no better example of that than Boogie Storm. The dance group was a personal favorite of Simon’s and he loves them to death. He even stole a Golden Buzzer from Howie just so that he could give it to Boogie Storm.

They also incorporated his son Eric in their last performance. It was a nice touch and was an overall great tribute to their biggest fan. This same performance, however, was panned by Howie. Howie pressed his reject button during the performance and he continues to state that the group couldn’t dance to save their lives. Only Boogie Storm came out tonight with a performance with Marcelito Pomoy and all the other contestants and this time everyone enjoyed it. There were acrobats with Duo Transcend and Sandou Trio Russian Bar. And Hans had even introduced them all as his support acts.

It was basically a performance straight out of Simon’s dreams. The judges had enjoyed it and they also enjoyed mocking their fellow judge Alesha Dixon. The show put together a montage for her benefit. They showed some of her greatest moments this season and they also had a Q&A about her. The cast members were asked True or False questions about her and it turns out Simon and Howie were really good at this game. The guys knew her best. Alesha had also led a very colorful life and so it was great getting to know her. And after the show touched base with JJ Pantano.

JJ came back to tell some jokes. He was also just adorable and so it was great seeing the little boy again. He was just as funny as before. He got under the judges’ skin. He made the crowd laugh and so JJ was a rare talent. It was sad he didn’t make it to the Finals. The show also brought back V.Unbeatable for a rare performance with Blink 182’s drummer Travis Barker. Barker was an amazing drummer. He went Bollywood tonight and V.Unbeatable got to show their tremendous skillset.

The show also put together a montage for Heidi. She was back after taking time away and so it was welcome back for her. The judges were glad to see her. The audience even more and it was a nice welcome back. The show had several performances tonight and the next one was with Season 1 Champion finalist Kseniya Simonova. She performed sand art to music from Angelina Jordan and Tyler Butler-Figueroa and it was such a moving piece that really got to everyone. They all found it beautiful.

There was also a performance from Lindsey Stirling. She was back this year to give another stellar performance and this time she worked with the shadow dance group Silhouettes. They performed a dance about a young violinist. This violinist grew up to have a family. There was even a dog and again it was such a great job that it moved everyone. Even the judges gave this performance a standing ovation. And afterward, it went back to being silly because the judges got to play a guessing game with puzzles they needed to unravel.

There was even a performance from Shin Lim and Colin Cloud. The Mentalists came together for a mind-bending trip and no one will ever know how they did it. It would just remain a mystery until the end of time. Then there was a performance from Kodi Lee. He was the winner of this past season of America’s Got Talent and he was such a rare person because he was super talented in one aspect and was severely autistic in another. Kodi took everyone by storm on his season of AGT. He was still winning over fans and his performance of “Sign of Times” was nothing short of amazing.

AGT has come up with a lot of talented people in its time. Their champions were back now to prove they were the best of the best. Ten acts performed last week. It had been up to the superfans to vote through the best act and America first saved five. The first act going into the Top Five was Duo Transcend. The next act was V.Unbeatable. They beat out Hans and it had been a tough round. Only Hans made sure to leave after receiving a hug from Simon and so at least they ended on a good note. The next act to make it through was a kid.

Tyler Butler-Figueroa made it into the top five. He was the third act to join the others and so there was only room enough for two more acts. The next act to make it was Marcelito Pomoy. He beat out Angelina Jordan and was the second to last act to join the top five. The last act to join was Sandou Trio Russian Bar. They beat out Silhouettes and with them the top five was complete. But there could only be one winner. It all came down to Duo Transcend, V.Unbeatable, Tyler Butler-Figeuroa, Marcelito Pomoy, and Sandou Russian Bar.

And the act that won it all was revealed to be V.Unbeatable!

They were the best in the world and now everyone knows it!