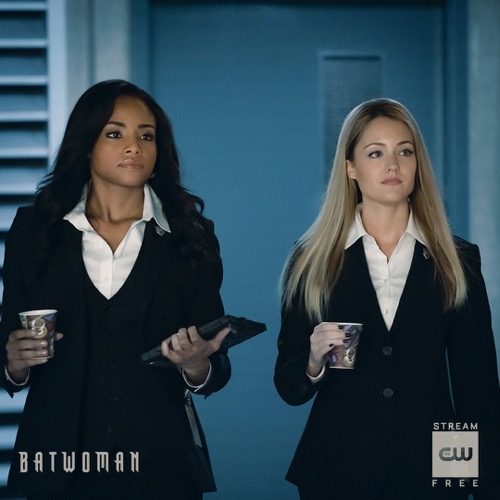 Tonight on the CW the series Batman airs with an all-new Sunday, May 10, 2020, season 1 episode 19 and we have your Batwoman recap below. On tonight’s  Batwoman season 1 episode 19 called, “A Secret Kept From All The Rest” as per the CW synopsis, “Members of Gotham’s intelligentsia begin disappearing, causing Cmdr. Kane, Sophie and the Crows to go in search of the newest homicidal threat to the city; Kate starts questioning the loyalty of everyone around her just when she needs them most.”

One of Gotham’s worst criminals are free and Jacob comes face to face with one in the subway that his machetes. Kate is there, she tells the man these are innocent people, he says he doesn’t care. The machete-wielding criminal’s name is Tim, a former football phenomenon.

We see Alice, reading a book, Mouse brings her a phone, tells her crows have an app now; they need to get out of Gotham. All of a sudden there are hundreds of bats in the cave where they are hoarded. Mouse reminds her about the new life they were supposed to start together. She tells him to have patience. Hush intrudes their silence, he is upset and tells Alice he wants a proper face. She tells him also to be patient, then she heads to the morgue for new supplies.

Luke hands Kate the only shard of kryptonite on the planet. He tells her that Bruce was holding on to it for a friend. He tells her that Alice knows this can penetrate the bat suit, along with anything else she reads about in his dad’s journal – and all he has to do is destroy the kryptonite. Mary is there to see Kate, she is talking about Tim, the football phenomenon turned killer. Kate tells Mary that she wants to stop Tim before he goes after anyone else, maybe then people will take Batwoman serious again.

Alice goes to see Professor Darby, she tells him that she is looking for a little green nugget called Kryptonite. She tells him that his name was written in a journal. He said he did examine something like that one day, but he doesn’t have it anymore, he gave it back to the owner, Lucious Fox, Wayne Enterprises, Gotham city. She grabs a rock off his desk and hits him over the head with it.

Luke is trying to destroy the kryptonite with various chemicals, Mary tells him to try crushing it instead.

Batwoman goes to see Tim’s brother, Apollo, she asks him if he is helping him. He says no, testified against him, and put him away to Arkham. He tells her that this game turned him into a monster. She tells him to reveal where to find him, all of a sudden, Tim shows up with his blades and shouts, “Apollo you betrayed me.” Batwoman turns to Apollo and tells him to run. Tim throws one of the machetes and hits his brother in the back. When Time goes to take the machete out of his back, Apollo pretends he is dead.

Jacob tells a news reporter that he sees Batwoman like every vigilante in the city, a threat. Crows will bring Tim to justice. Mary and Kate listen to the news and are not too happy about what Jacob is saying. Julia calls, she wants Batwoman to sit this one out. Mary is making Hush a face, Mouse isn’t happy, he reminds her that she promised they would kill him.

He tells her that they are hunted and is this weird obsession with her family, is it worth it if they are dead. Mouse says he says he is leaving. She laughs at him for thinking he could survive in the real world. He says the same way he could in Arkam for five years. She tells him that he can’t leave her alone. The two hug, she tells him that if they are to leave, they have to leave the right way, with a party.

Kate is with Luke and Mary, she tells them that she is not going to stand down. Mary says she has an idea. She flashes the bat light, gets Jacob’s attention – she tells him to speak to Kate, who tells Jacob that she wants to team up with him. Jacob throws the phone against the wall and smashes it. Mary tells Jacob that she did this, she believes in this. Batwoman is there, she offers Jacob a truce, to partner up. They shake hands, then Jacob asks her how do they get him.

The media is with Kurt Donahue, Tim’s former coach, he tells him to join him on the 50-yard line where he can apologize to him personally for the past.

Alice is sitting with Mouse, she tears up her Alice in Wonderland book and burns it – she tells Mouse this will help them to move on. He tells her that what happened to them, should not have happened to anyone. She tells him that she still wants to join him in the beautiful garden. All of a sudden, Mouse notices blood coming out of his nose, he says no, then asks Alice what she did.

He looks at her with disbelief and asks her how she could poison him. Mouse starts to fall to the ground, Alice is crying and tells him that he made her choice, it wasn’t her fault. And, he would never understand why she has to get revenge on her family. She says goodbye to her sweet Mouse, her brother, her everything.

Sophie finds out that Jacob has teamed up with Batwoman, she thinks something is up and she needs to get there. Sophie tells Julia to warn Batwoman to watch her back.

Donahue is in the stadium, Jacob and Batwoman are there with a lot of crows. Julia warns Luke and Batwoman. The lights go off in the stadium, they also lose power in the Batcave. All of a sudden, Tim and his machetes are there. He kills some crows then heads down to the field to go after Donahue. Batwoman whisks down there and tells Donahue to run as she takes on Tim.

The battle, then Kate tries to talk him down by reminding her of who he was. The lights turn back on, Jacob and the crows shoot and kill Tim, then Jacob tells her that he promised her a war, they all start shooting Batwoman but she is able to propel out of there in time before they kill her too. Sophie comes running in with Julia, she asks Jacob what he is doing.

Back at the station, Sophie asks Julia if she warned Batwoman – she says yes, but she didn’t listen.

Kate is with Mary, she pours them both a strong drink. Mary tells her that she is really sorry, she believed Jacob too. Kate says Jacob’s betrayal hurt really hard. Mary reminds Kate that Jacob hates Batwoman, not her. Kate thanks Mary for having her back, they toast to sisters. Luke walks in, he tells Mary that he destroyed the kryptonite, he pulverized it like Mary suggested doing. The kryptonite is turned to dust, he Luke pours it on the table, Mary blows it away. Kate tells Luke and Mary, no more secrets after today, she shows them some more kryptonite that she has in her possession, she promised her friend that she would keep it and she cannot destroy it until she speaks to her.

Jacob is alone having a drink, when one of the crows comes in shows him what happened to the bullets that they shot at Batwoman. Jacob tells him they are going to have to find something stronger then.

Alice made Hush a new face, Bruce Wayne. She tells him that he needs to now go get that kryptonite from his cousin.