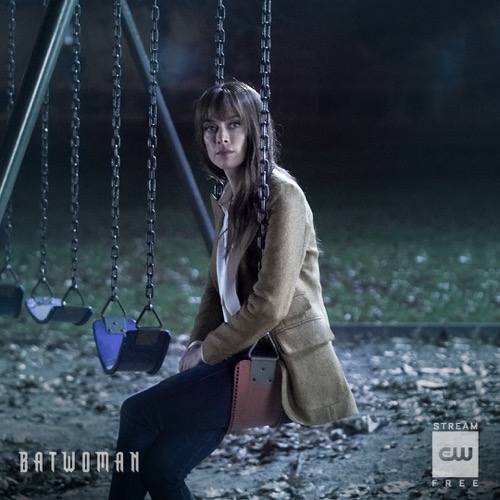 Tonight on the CW the series Batman airs with an all-new Sunday, January 26, 2020, season 1 episode 11 and we have your Batwoman recap below. On tonight’s episode called, “An Un-Birthday Present” as per the CW synopsis, “On the Kane sisters’ birthday, Kate and Alice contend with demons from the past, and an unexpected guest makes a surprise appearance in Gotham.”

Alice shows up Kate’s office, but she is pretending to be Beth and says Happy Birthday. Kate grabs her by the throat and shouts, “who are you?.” Alice grabs some kind of spray from a purse and sprays Kate in the eyes to getaway.

We go back to when Beth was young, Johnny brought her some cake and a present, a cat, who she says she is calling Cheshire Cat. Mouse’s father comes into the room and lights a candle for Beth can make a wish. Beth wishes to see her sister and father, Johnny’s father tells her that her wish will never come true because she said it out loud.

Present-day, Jacob tells Sophie not to interrogate Alice, let her be transferred and be done with her. Kate walks in, she asks Sophie if she was planning on telling her that Alice escaped, Sophie says it is impossible and shows Kate a live video of Alice, she is still apprehended. She has been in a holding cell for the last eight hours. Kate says she swears she saw her. Sophie says she is not the only one, Mary saw her too.

Kate goes to see Mary and Luke, Mary says she is going to the university to see if anyone knows who Beth, or Alice 2.0 is. Kate tells Luke that she needs to find this Beth and see what is going on. Kate finds her in a park and tells her that she is sorry that she didn’t recognize her. Beth says she feels like she is going crazy, nobody knows who she is. Kate approaches her and hugs her.

Sophie goes in to see Sophie, she asks her for her book, a copy of Alice in Wonderland, it brought her so much comfort the last time she was in a cell. Sophie says that unless she confesses that she framed Jacob, she is not going to see to her comfort. Alice says their birthday party planned, and she loves surprises, but Kate doesn’t like them.

Mouse sends a video to the police, he shows that he has something that they want; they commission and the mayor’s sons. He will give them till 9 pm to return Alice, or he snuffs these two out.

Kate is with Beth, they are enjoying a drink together. Beth asks her what the tattoos mean; then she says it almost feels normal, sitting there chatting to her sister, her best friend since she pulled her out of the crash. Kate climbed back into the car, and she pulled her out, she saved her. And ever since then, she has been her hero. Kate gets a call, Luke tells her to turn on the TV, Kate finds out about the two boys that were kidnapped.

Sophie goes back in to see Alice and brings her the book she asked for. Sophie says she brought her what she requested. Alice says the book set her free from that house of horrors. She and Johnny were trapped in that house. Alice asks Sophie if she ever felt trapped, and only dream about being out.

Kate sets out to find the two boys and save them when Mouse runs right into her and knocks her off her motorcycle. Kate wakes up and she is in a car, in the driver’s seat, with the two boys in the car. Mouse calls Alice, Sophie is in the room, he tells them he has Kate, Kate then tells Sophie to let Alice go. Mouse says good because his next call will be to tell her where to find Kate’s body.

Beth shows up to see Luke, he tells her that Kate is kidnapped. Beth is surprised, Luke says she was kidnapped by her.

Alice tells Sophie to get off the handcuffs, Sophie says she is not doing it, Kate gave her a cryptic message, when she says it twice, it means don’t do it.

We go back to when Alice was young and trapped in the room, Johnny’s father finds the cat. Johnny and Alice beg to have the cat back, he kills it in front of them. Sophie tells her that was awful. Sophie asks her how awful will it be when she loses the thing she thinks so dearly about.

Beth tells Luke to call her dad, he says he is in jail for killing her mother, so he can’t do that. Luke has a GPS on Kate’s bike, but he can’t send anyone in because Mouse will kill the hostages. Beth suggests they give Mouse what he wants, Alice.

Back to the room, Johnny’s father asks Alice if she made the sweater for the cat, she shouts that her father will kill him. He shows her a paper with her father and his family, looking happy. He tells her that the craftmanship that she did on the sweater, she has to do with the skin samples, to fix Johnny’s face.

Alice said that she knew that nobody was coming for her.

Mary disguises Beth, so she looks like Alice. Mary tells her she looks exactly like her and it frightened her because the last time she looked into those eyes, she was holding her dying mother, who Alice poisoned. Mary tells Beth that she is nothing like Alice.

Meanwhile, Mouse is throwing gasoline all over the car. Beth disguised as Alice shows up, she tells Mouse that he played his part well, he runs to her and hugs her. He tells him that a deal is a deal, they must let them go. Mouse asks her if she was followed, then he asks her if there are any lions or tigers about there – she doesn’t answer, he pulls off her wig and asks her who she is.

Mouse puts Beth in the trunk, Kate gets out of the car and starts to fight everyone, Mouse falls back and a metal iron goes through his shoulder, he can’t move, he lights a lighter and throws it at the car.

Sophie tells two officers to transfer Alice; it doesn’t take long for Alice to take the binding from the book and strangle one of the officers while she attacks the other. She gets one of their guns, and shoots – Alice gets away. Sophie comes running around, Alice pulls a gun to her head and tells her to drop it. Then, Alice disappears and Sophie is left there.

Kate is trying to open the car that has the two boys inside before it blows up, the car is on fire. Then Kate goes to rescue Beth, who is trapped in the trunk. Kate can’t save her, she goes to get something to help her and manages to get Beth out before the car blows up.

Mouse is in surgery, Sophie orders a six-team person watch around the clock. Kate goes to see Sophie and says Happy Birthday. The citizens of Gotham call for Batwoman, Kate gets in disguise and shows up for them. Sophie goes to see Jacob and tells him that Alice escaped. He says it is a good thing, they can put a bullet in her and nobody would bat an eye.

Kate gets a surprise from Mary, Beth, and Luke for her birthday. Mary tells her that she really likes Beth and knows what she lost now. Mary thinks Beth being there is a cosmic anomaly. Luke comes out with a cake, there are two candles on it. Kate says all she ever wanted was a second chance, she looks at Beth and says, and here you are. Beth starts screaming and holding her head. Elsewhere, Alice is doing the same.