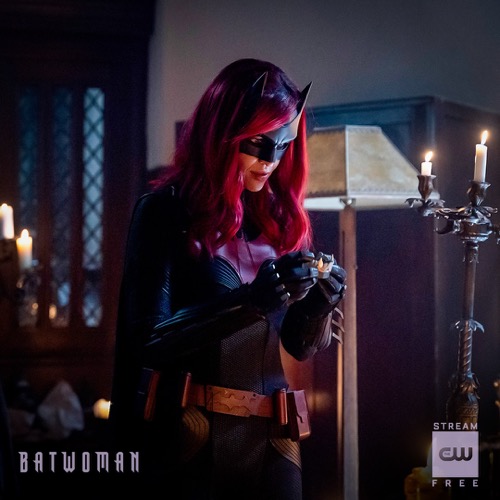 Tonight on the CW the series Batman airs with an all-new Sunday, February 23, 2020, season 1 episode 13 and we have your Batwoman recap below. On tonight’s  Batwoman season 1 episode 13 called, “Drink Me” as per the CW synopsis, “A new villain sinks her teeth into Gotham and The Hold Up opens in grand fashion. Sophie reluctantly requests that Batwoman keep her distance knowing their interactions could compromise her career.”

A woman and man are in bed, all of a sudden, she bites him and then drains the blood from him, while she reads a magazine.

Luke is upset, he wants to know who shot Beth. Mary agrees, but first, they need to figure out the real Alice. Jacob is out of prison and exonerated, proven that Alice and her gang framed him.

IN the morgue, Jacob and Sophie are there to witness Mary’s body. All Jacob feels is hallow. The bullet wasn’t one of theirs, and he wants to know whose is it. Jacob kisses his two fingers and presses it to Beth’s forehead.

Luke took a necklace off Beth after she was shot, he gives it to Kate. He brings a case to Kate, of a vampire, her name is Nocturna. She drains her victims and leaves them for dead. Kate says she has always wanted to slay a vampire.

Batwoman finds Nocturna, and they get into a fight, but Nocturna wins and quickly has her tied up. Luke is assessing her vitals, Sophie comes in, she tells her that there is another girl, she is alive but needs help asap. When Sophie untied Batwoman there is an awkward moment of chemistry between the two of them, Sophie says there can’t be the next time.

Kate goes to see Mary, she is having flu-like symptoms. Mary tells her it could be just because of what happened to Beth. Mary is surprised to find out that Kate has animal tranquilizer in her blood, Kate brushed it off.

Jacob updates his team on Nocturna and tells them to get out there and find her. Nocturna is targeting club-goers, Kate comes up with a plan to have a party in the last club, The Hold-Up, that she hasn’t targeted. Jacob sees Mary’s social media post about it and tells Mary they need to be there as well.

At The Hold Up, Mary arrives ready to party and to try to fish out Nocturna. Luke and Kate are watching on video and see Sophie walk in. Sophie tells Mary about Nocturna and acts surprised like she knows nothing. A woman, Al, introduces herself to Sophie, Mary makes her excuses and manages to get away from Sophie.

Jacob is given the surveillance video from the warehouse, meanwhile Luke and Kate are still watching in on what is going on inside the club. Kate shows up at the bar and gives Al and Sophie shots on the house. Kate cuts her finger cutting a lime, Al says blood makes her queasy and asks for water.

Luke is also in the bar, he helps Mary out of a situation where a woman is hitting on her. Kate tells Luke she needs him now. Alice is outside the club, Kate goes out to speak to her. Alice says that she means nothing to her, instead she chose a complete stranger. Kate says that Beth was not a stranger, she was a kinder version of her. Alice says she hopes Beth was worth it and walks away. Alice goes back to her warehouse and rants to herself, all of a sudden, Nocturna is there and bites Alice on the neck.

Kate and Luke are still looking out for Nocturna when Kate sees a woman in the alley and asks who that is. He says her name is Natalia Knight, 27, adopted and a disease where she cannot be exposed to sunlight and her kidneys have a problem cleaning her blood. Kate says that is why she needs fresh blood.

Alice tells Natalia to have her fill and let her go. Natalia says her fill is every last drop.

Sophie reports to Jacob that they have crow all over the strip and no leads yet.

Batwoman is on the run, she finds Alice hung up, and asks where Nocturna is. Meanwhile, Mary is in the alley, trying to help a woman who is intoxicated, Nocturna shows up and bites Mary in the neck.

Batwoman heads to the cathedral and finds Nocturna, they get into a fight. Meanwhile, Mary is tied up, Alice is there to help save her. Batwoman blinds her by flashing the light of her cell phone in her face, she manages to handcuff Nocturna. Batwoman calls Sophie, tells her where to find Nocturna. Jacob is not happy with Sophie, he asks her to figure out which side she is on, Batwoman or his, and until then, she is suspended.

Mary is resting, Kate asks her if she remembers anything. Mary says she remembers being bit by Nocturna and being hung up, Batwoman saved her.

Kate goes to see Alice, she asks her how Nocturna knew about the desert rose with Mary. Alice admits she sent Nocturna to her. Kate asks Alice why she saved Mary, she replies that she wanted to show her how stupid she was to let her die. The two cat hateful words back and forth, then Alice says to Kate that maybe he doesn’t want her to give up on her.

Dr. Campbell finds Alice, he visits her in the warehouse. He took a sabbatical six years ago, he is a plastic surgeon who specializes in facial reconstruction for children.

Mary is listening to the news, Nocturna is in jail, she used an animal tranquilizer to subdue her victims. This makes Mary think, she puts two and two together, because Sophie told her that Nocturna drugged Batwoman, Mary knows that Kate is Batwoman.

Sophie goes to see Batwoman, she kisses her.