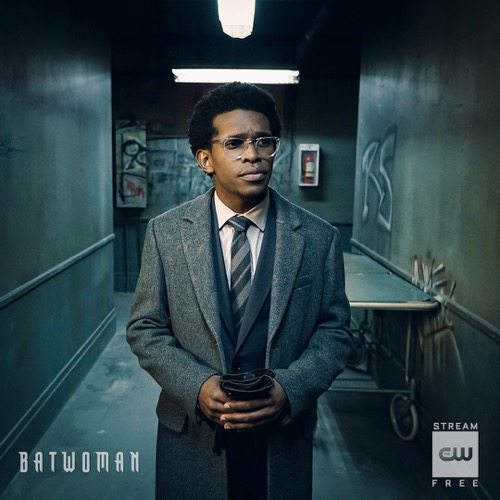 Tonight on the CW the series Batman airs with an all-new Sunday, March 15, 2020, season 1 episode 15 and we have your Batwoman recap below. On tonight’s  Batwoman season 1 episode 15 called,“Off With Her Head” as per the CW synopsis, “More of Alice’s dark past is uncovered when Cartwright shares a twisted story with Kate while Jacob goes searching for his wayward daughter. Mary and Luke follow a lead on Beth’s killer.”

We go back to when the girls were young, Their mother gives them each a necklace with their birthstone on it. She tells them to keep it close to their heart.

Present-day, a woman is walking down a lane and a creepy guy is following her. Batwoman shows up, he says this just became a party. All of a sudden, there is a second man and tries to shoot Batwoman, and fails. The woman tells Batwoman that she is needed elsewhere and points to the roof. She heads up there and finds a man that looks dead, he has a note in his mouth that reads, “ask about mommy dearest.”

The next day Jacob knocks on Kate’s door, she has the man in her place, he wasn’t dead, and it was Mouse’s father. Kate tells Jacob that Alice is not dead and she thinks she had something to do with this.

Alice is in a house, she finds Mouse in the basement and tells her to stay away from him. He shouts that she is dead and screams for help. She slaps him. She tells him that she is alive, he was fooled. She tells him the secret password so he believes it is her. Alice asks Mouse whose house this is, he says it belongs to the Queen of Hearts.

We go back Mouse was younger, at home, his grandmother comes to visit. Johnny grabs her and hugs her. Alice is there, she says hello and greets the queen, who loves her necklace; it is the one that her mother gave her.

Jacob tells Kate there is no way, he had seen Alice dead. Mouse’s father wakes up, Jacob calls him names and asks him if he wants him to start with his knee caps. Mouse’s father says he has spent the last six years fooling Gotham city, he turns to Jacob and says your wife included.

Mouse is with Alice, he flips out and tells her that his greatest fear is her, he ties her to the chair that he was tied in by his father. He puts the mask on her face, that his father had on his and runs upstairs to leave her. Alice imagines herself in a room, the Queen is there, Mouse’s face is really disfigured, and he says, “off with your head.”

Luke shows up at Mary’s clinic, she asks her where Kate is, she has a lead on Beth’s murder.

Mouse’s father says that he convinced his son that Alice is his greatest fear. He says he will tell them where she is, in return for his freedom. Jacob goes to strangle him, Kate has to pull him off. Mouse’s father is eerily calm and says that mommy dearest is probably paying Alice a visit.

We go back to when Alice was wrong and the queen came for a visit, Alice serves her tea. She slaps Alice and tells her that if she knows how to make tea, it shouldn’t be so sweet. Then she pours boiling water on her hands. Then we see the queen cutting Alice’s hair. The Queen then yells at Alice because there is no cream, Alice looks around in the kitchen, can’t find any, then goes outside where there is another fridge. Mouse’s father walks in and asks her what she is looking for, she says she has to get his mother cream.

Present-day, Jacob says he is going to find Alice, then he is going to skin Mouse’s father alive. Kate asks him if that is why Alice the note about mommy dearest, he says Alice wanted her to know what she went through so she would kill him. He asks her for water, in return he says that he will tell her where she is. He takes the glass, smashes it and cuts an artery in his neck, says she will never find Alice.

Luke and Mary are walking outside, it’s raining outside. Together they find a car, filled with guns that have the same caliber that killed Beth. Kate calls Mary, asks how she closes a neck wound. Kate goes and gets a staple gun to close the wound in the neck, it stopped the bleeding and he has a pulse. Luke asks her what happened, Mary says doctor/patient confidentiality, she can’t tell him.

Kate has Mouse’s father’s neck wrapped and he is conscious. He gives her the address where Alice is, Jacob is on his way.

Alice manages to knock the chair down, she gets the mask off her face and climbs up the stairs, but the door is locked. She smashes the basement window and is about to kill herself with a piece of glass when Jacob busts the door open and tells her it is him. He goes to reach for her, and they fall down the stairs together. He cradles her and rubs her face.

Jacob gets a blanket to put over Alice. He tells her that Kate is with Mouse’s father, she got him to tell them where she is. She mentions mommy dearest, Jacob says that she was a treat, his mother. Alice smiles and says that is not mommy dearest.

We go back again to when Alice was young, Mouse’s grandmother had Alice’ mother earings on, Alice asks where she got them. Then Alice goes into the shed and breaks open a fridge that is in there, inside is her mother’s head. She goes back to the house, takes the air chamber that the queen uses, sets a fire and aims at her. Meanwhile, Mouse’s father is telling the story to Kate, she strangles him.

Alice walks into where Kate is, Jacob is there too, Mouse’s father is dead. She congratulates Jacob and tells him that both his daughters are now killers.

Kate is outside, she is drinking. Alice comes out, takes the bottle and drinks from the bottle too. She tells Kate it is going to be a long night, bodies just don’t bury themselves.