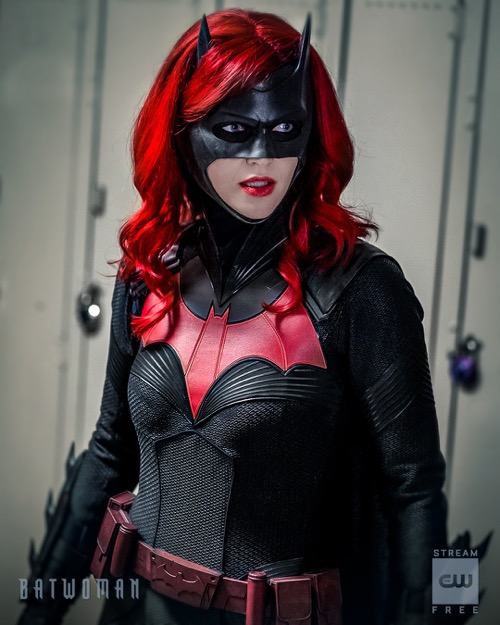 Tonight on the CW the series Batman airs with an all-new Sunday, January 19, 2020, season 1 episode 10 and we have your Batwoman recap below. On tonight’s episode called, “How Queer Everything Is Today” as per the CW synopsis, “While Gotham busies itself reacting to Batwoman’s awkward encounter, Alice celebrates her ultimate act of vengeance with Mouse.

A devastated Mary focuses on Jacob Kane’s trial, while Sophie seeks advice about her love life from someone unexpected. As they tackle the newest threat to Gotham, Luke prioritizes protecting Batwoman’s secret, and Kate must decide what she is willing to do to honor Batwoman’s identity…and her own.”

People are in a subway car, and it is not stopping at the stops. In fact, they have lost their brakes. Luke updates Batwoman, and she is on the way. When she gets there, she hooks her bike to the subway car and manages to stop it by attaching a cable. The cable lets go and Batwoman almost gets hit with it, but a police officer grabs her and knocks her out of the way.

Kate is frustrated, she saved 450 people from hitting a concrete wall and all Gotham seems to care about is Batwoman’s sex life. Luke says they just want to see Batwoman happy. Luke goes over to see what Kate was looking at on her computer, it is an article about her father that reads, “Crows Commander Awaits Murder Trial as Evidence Piles Up – Jacob Kane maintains innocence in the shocking death of socialite wife Catherine Hamilton-Kane.”

Alice is in the graveyard, she is beside Catherine’s gravestone having tea, Mouse is with her and tells her he is getting cold. He tells her that he knows she has this fantasy that they are going to be family with Kate one day, but she doesn’t have that fantasy. She doesn’t see her as a sister, she just sees a soul that needs saving. As long as she wears that mask, she is never going to join their family.

Mary records a message on social media, says that she is going to sign off for a bit. Kate walks in, she wants to help. Mary says to speak to her sister and tell her to stop defiling her mother’s grave. Kate says she is sorry. Mary says she knew Alice would do something unthinkable, she just wished Kate had believed it too.

Luke and Kate are where the subway car whose breaks stopped is kept. Inside the car, Kate finds a device that a hacker placed in the train to stop the train remotely. Both Luke and Kate get a message, and so does everyone else in Gotham. The person took over everyone’s phones and tells them that they have do give money, up to five million dollars to them.

Kate and Luke are in the bat cave, Like thinks Batwoman is the target. Kate wants to trace the IP address of the person who took over the cell phones.

Jacob is in prison, he found a razor blade in his lunch. A prisoner comes over and sarcastically welcomes him, he gives him his lunch and says, help yourself.

Jacob calls Mary, he says that it is incomprehensible that Gotham thinks he killed her mother and both he and Kate think she should seek some counseling. Mary says she doesn’t need help, she needs to get to Alice and have her admit to killing her mother.

Batwoman is listening in on Sophie interrogating two guys who she suspects cut the breaks to the subway car. She is shouting at one of the men and when he doesn’t answer, she hits him across the head with her gun. Sophie goes outside and tells Batwoman that she knows she is there. Batwoman comes out, Sophie says her husband left her. Batwoman says they all wear masks, it is time for her to takes hers off.

Mary intercepts Dr. Campbell when he is leaving he hospital, and asks him if he will testify in her step-dad’s father because he was set up by a guy who made a face out of real skin, that looked exactly like him. Dr. Campbell says that he would love to help, but what she is talking about is science fiction, and sometimes when people are under duress they see what they want to see.

Luke is able to dissect the recording of the person who hijacked everyone’s cell phones, Kate knows it came from the university, she recognizes the sounds in the background.

Mary calls Sophie and tells her that Dr. Campbell wouldn’t help and thinks she is losing her mind. Sophie sees Alice go into Gotham University and tells Sophie, who tells her to get out of there now.

Batwoman crashes a party in the university and turns off the lights, she sees someone walking through the crowd with a cell phone on to lead their way. Batwoman intercepts the girl in the bathroom, her name is Parker Torres. She was on the train, patrolling it from her phone and was going to stop it before Batwoman did. She says that she wanted to scare her parents into thinking that she almost died, she thought they wouldn’t think she was a freak, she is gay. She says that her parents found out from a friend that she is a guy and they are upset, hold their rosaries every day and pray she will come out of it. Parker tells her to leave her alone before she finds more reasons to wish she was dead.

The police are on their way to the university, they are looking for Alice. Meanwhile, Parker runs into Alice and calls her a psycho. Batwoman walks up, tries to intercept Alice, but Alice manages to knock the two of them out.

In a warehouse, Alice has Parker and Batwoman who tells her to leave Parker to go. Alice says that first, she needs to prove that Batwoman is not a hero. Alice tells Batwoman to take off the mask.

Mary is picking things up, Sophie walks in, Mary says what’s the point of running a clinic when she can’t even save her own mother. Mary asks if they got Alice, she says she wasn’t there. Mary is upset, she knows she saw Alice walk in. Sophie tells her that maybe Dr.Campbell was right, maybe she needs some time.

Batwoman says she is not taking off the mask to join her in a twisted fairy tale. Alice threatens to use a power saw on Parker if she doesn’t, Batwoman takes off her mask. Alice says she needs Parker to take over everyone’s cell phones again, but this time out Batwoman as Kate. And, if Parker doesn’t, she will kill her and everyone in the school. Parker doesn’t want to do it, she says they need Batwoman. Kate tells Parker to do it. Parker did it, everyone in Gotham now knows Kate’s secret. Parker is free, Kate tells her to go.

Kate apprehends Alice who tells her she is not a hero. Kate tells her that she is pure evil. Alice asks her why she can’t accept her for who she is. Kate says that the world is a whole lot better if Beth had stayed dead. Sirens are going off, Sophie and the team are there and evacuate the building. Parker sent a message telling everyone that there was a bomb. Alice says that wasn’t the detonator, Mouse has it in his hand, he is outside the university and presses the button, the bomb goes off.

Parker is with Kate, she tells her that if she ever wants to talk about her parents, she is there for her. Parker tells her she is glad she is Batwoman.

Alice is in jail, Sophie walks in and tells her that is going to sit there indefinitely until she tells her where to find a mouse.

Luke says they are going to figure things out, he has a cupcake for her, puts a candle in it and wishes her Happy Birthday.

On the cover of a magazine, Batwoman is outed as a lesbian.