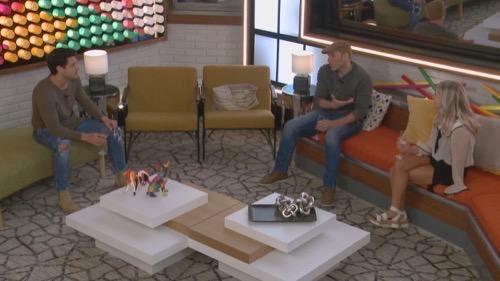 Tonight on CBS Big Brother 22 airs with an all-new Tuesday, October 28, 2020, episode and we have your Big Brother 22 recap below! On tonight’s Big Brother season 22 episode 36 “Winner Announced” as per the CBS synopsis, “It’s all over tonight and either Cody Calafiore, Enzo Palumbo, or Nicole Franzel will be announced as the winner of Big Brother 22. We will also see who is chosen as America’s Favorite House Guest and get the prize of $25K”

Tonight the All-Star season comes to an end, Enzo, Nicole, and Cody have made it to finale night again. It’s time for part two of the final HoH competition. The winner will face off with Nicole in part 3 for the chance to be the final HoH. After spending so much time in the Big Brother house, it’s time for a vacation. Here is how it works; in each round, they will have to take a photo with an evicted houseguest who match the description on the post card. After placing the correct house guests cut-outs in front of the postcard backdrop, hit the button to take a picture.

But, it’s not that easy. A bunch of camera hogs are photobombing your picture and you need to get them out of the way by walking across the balance beam and swinging them out of frame. When you think you have a clear shot, hit your button to snap a photo. If the correct house guests are in the photo and no part of any of the camera hogs are in the frame, you will see a green border and can move on to the next postcard. If it is wrong, they will see a red border and have to try again. The player who successfully completes three postcards in the fastest time wins.

Enzo is the first to play, he got third place ten years ago and doesn’t want that again. Enzo finished with a time of 37:38, Cody finished with a time of 4:49. Enzo is upset, he calls himself a donkey. Cody is excited, but he keeps is calm because he sees how upset Enzo is. Enzo tells them to take each other, he is out of there, third place is awesome. And, he feels bad for all the people who believed in him. He says he will not campaign, they need to do what they have to do, he is ready to go. Enzo knows how this goes, he is worthy of third place. He is in his room and talking to himself out loud, he is really losing it.

Enzo has calmed down, now he is in campaign mode. He is going to try and convince Nicole to take him to the final two if she wins. Nicole tells him that she feels that if she goes against Cody he will win.

In the jury house, the houseguests are surprised to see Christmas arrive. She says Cody and Nicole have been working with Enzo since day two and at this point, she has no idea who is going to take who. They talk about the final three, Nicole is getting lot of bad press. A lot of them like Enzo, but they hope he makes good game moves towards the end. Memphis said Cody was weird in his goodbye messages, he made it look like it was your fault. Dani says Cody stepped it up in the competitions towards the end. Tyler days Cody has become Derek.

It is time for the third part of the final HoH and this one is called, “Vinyl Exam.” And to win, they will have to prove just how much they know about the members of the jury. They are about to watch a series of short videos, each video references a record album based on a specific juror. Each album has three statements about the juror. Their job is to decide which statement is false. They will do so by answering, A, B or C. For each correct answer, they will receive one point. The All-Star with the most points after eight videos will become the final HoH of the season. Cody wins with a perfect score, he is the final HoH; he gets to decide who to evict and who to take alongside him to face the jury.

Time for Cody to make his decision. First, Nicole and Enzo get to plead their case. Nicole tells him that he has been her ride or die since hour one, day one in this house; and if she was in his position, she wouldn’t cut him. Enzo tells Cody that they have been together since day one, he had his back, everything he did was for him, please take him to the final two. Cody is crying, he knows how this works. He is guaranteed second place and fifty thousand, but he has to decide who to take with him and who to evict. This a half-million-dollar decision. Cody stands, goes to the head of the living room, and votes to evict Nicole.

Enzo tells Cody that he is indebted to him forever. Nicole won her money, she was awesome. Enzo keeps talking and Cody looks miserable.

Nicole is crying and with Julie, she didn’t see that coming; she really believed that Cody would take her to the end because their bond was close. Nicole can’t wait to ask Cody why he took Enzo with him, she has no idea. She says she is not angry because this is a game. Nicole says she thought she was going to make it to the finish line, she had her speech ready. Julie asks her how she got this far, Nicole says she let everyone take each other out and laid a little bit low, but not too low. She was throwing competitions early on, and some she just wasn’t good at. Nicole says Cody has guts.

The jury is waiting for the final jury member. DaVonne says if they are smart it will be Nicole, and it is. Julie announces that Cody won the final HoH competition and decided to evict Nicole. Before the jury votes for the winner, they have questions for the final two. Tyler asks Cody if he played a better round game than Enzo. Cody says yes, between competitions and the social game that had, and multiple alliances. This time he wanted to play a totally different game. Ian asks Enzo the same question.

Enzo says he used Cody as a weapon, he jumped on his back and used him, he didn’t have to win anything. He says his social game came in handy and he won competitions. DaVonne asks Enzo outside of his social game, what was his strategy. Enzo says his strategy was to make everyone love him and not get targeted. Everyone thought they had Enzo in their back pocket, he is proud of the way he played. Christmas asks Cody if his game evolved, he says yes. The first time he played his social game, but no strategy. This time he played strategy. Memphis asks Enzo the same question.

Enzo says yes, this time he played competitions to the fullest. Dani asks Cody outside of the weeks how did he influence what happened in the house. Cody says he had a huge influence on a lot of things in the house. David asks Enzo why he had no responsibility for everyone’s evictions in the goodbye messages. Enzo says he didn’t want anyone to get voted out. Nicole asks Cody why he took Enzo instead of her. He says he contemplated taking her many times, he went back and forth, and his decision was based on her having won before, and it wasn’t an easy decision.

It is time for the final two to plead their case to the jury on why they should win. Enzo is up first, “This is it, I finally made it, final two-man. I am forever indebted to this man, if you want to give it to comp beast, this guy one HoH’s and PoV’s, then there is no reason for me to talk. The way I played this game, I knew that and I used this guy as a weapon. I went through this season like it was nothing, it was easier than the last one. I was not a target, I own it. I am forever indebted to his guy for taking me. And I am proud, for someone to play this game for eight days and not be on the block. My kids are watching, they are proud of me and I am so excited about that.

Five hundred thousand dollars means a lot to my family, thank you.” Cody, “I will not forget to mention this the first time, there is one time that he did sit on the block, and that was at the most crucial point in this game, It was the final decision that I had to make to bring him to final two which I made on my first season. I also never sat on the block, not on this night or any other night in the game. And so for me, between the competitions, between the strategy and between the relationships that I had in this house I can say that I was mentioned in the beginning by Kaysar, and I had to change the way I played the game. I had three of my final twos in the final five. I played a full well-rounded game. I hope you respect the game that I played.”

Time to vote. Ian is up first, he tells the guys game well played. DaVonne says she is proud of them both. Kevin gives them both congratulations. David salutes them. Dani says that she guesses all that scheming finally paid off. Tyler says this is one of the most deserving final twos. Memphis calls them wise guys. Christmas says that although she doesn’t believe everything this person said, she does agree they are most deserving. Nicole says she had a lot of fun with the two of them in the final week.

Julie welcomes back the first five evicted house guests who are joining them via video.

The winner wins $100,000.00 and the runner up wins $50,000.00. Ian has cast his vote for Cody, DaVonne for Cody, Kevin for Cody, David for Cody, Dani for Cody. The winner of Big Brother All-Stars is Cody. The final two come out of the house and hugs around for everyone. Just for the record, Cody has won unanimously.

There is still America’s favorite player, the person who America voted for will win $25,000.00. The top two house guests were Tyler and DaVonne. With nearly one million votes, the winner is Da’Vonne.