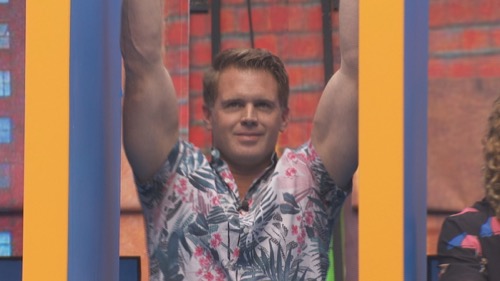 Tonight on CBS Big Brother 22 airs with an all-new Sunday, August 16, 2020, episode and we have your Big Brother 22 recap below! On tonight’s Big Brother season 22 episode 5 “Nominations & Safety Suite Twist,” as per the CBS synopsis, “Tonight on Big Brother we will see our new Head Of Household Memphis Garrett put two All-Stars up on the block.  We will also see the second Safety Suite Competition Twist.”

Memphis is the HoH and it is eleven years in the making. He wants to talk to some people, but he wants them to sweat a bit, see how they react in the hot seat.

Last week was a hot volcanic mess for Kevin and he feels sorry for Keisha, but he is happy that he is still there. Meanwhile, Dani is excited that Memphis is the HoH because she is in a six-alliance with him. David is worried, he doesn’t feel that he has really connected with David and that could make him a target.

Bayleigh is ok with Memphis being the HoH, she is not worried that he would put her up. Memphis calls everyone to the living room. He announces that the exiting Have Nots will choose the new Have Nots. You cannot choose yourself or any of the outgoing Have Nots. Memphis starts, he picks David because he has never been a Have Not, he is a rookie in the group. Ian asks for volunteers, Nicole offers to go up so he doesn’t get stressed. Nicole A.’s turn to choose, she picks someone who will be a good sport about it, Christmas. Kevin chooses Kaysar. The good news is, the current Have Nots pick the ones for the following week.

Memphis speaks to Nicole and Christmas, he wants to convince them to win the Safety Suite, that way they burn it out and only he and Cody have it left. Nicole is having a problem with Memphis’ suggestion, she doesn’t think it makes sense but doesn’t tell him that. Same for Dani, she thinks it is a dumb idea. If Memphis is not careful, the girls are going to figure out what he is up to.

Nicole goes to see Memphis, he says he hasn’t figured out who he is putting up and he is telling everyone to play the suite. Nicole doesn’t like what he says, it puts a bad taste in his mouth. Ian visits Memphis next, little does he know that Memphis plans on taking him out for the former Renegade alliance.

Time for the Safety Suite, the clock is ticking and Memphis wants to convince as many people as possible to burn their chance. He starts with Kevin, and little does Memphis know, Kevin was already planning to play it. Nicole tells Kevin that he shouldn’t do it. Next, Memphis hits up Tyler. There is no way Tyler is going to do it, he knows that he is safe and he knows what Memphis is up to; this is only good for Memphis’ game. David goes to the Safety Suite, he doesn’t have a good feeling about Memphis who choose him as a Have Not. Cody, Ian, Kevin, Christmas, Da’Vonne, and Bayleigh all play it. Ian makes a last-minute deal with Christmas if she wins that she makes him her plus one.

Time for the challenge, they will deliver drinks to a corresponding table, but the thing is, the tables are wobbly. They have to deliver the drinks and put them on the tables, without anything falling off. It really is a balancing act. The houseguest who does it in the least amount of time wins. The scores are: Da’Vonne 8:41, Bayleigh 2:48, Christmas 1:38, Kevin 2:22, Ian 3:16, Cody 2:44, David 2:53. Christmas wins the Safety Suite advantage this week. It is time for her to pick a plus one, she chooses Ian. David is upset, he really feels like he messed things up. Memphis wishes Christmas had picked her plus one differently, not someone that he had his eye on.

Cody goes to see Memphis and tells him that he doesn’t understand why Christmas chose Ian. Memphis says he is thinking of David, Kaysar, Nicole A., Bayleigh; he has lots of options. In fact, he told everyone to play the Safety Suite and Nicole A. decided not to, so maybe her.

Time for the nomination ceremony, Memphis has to choose two people to nominate for eviction. He picks Nicole A. and David.