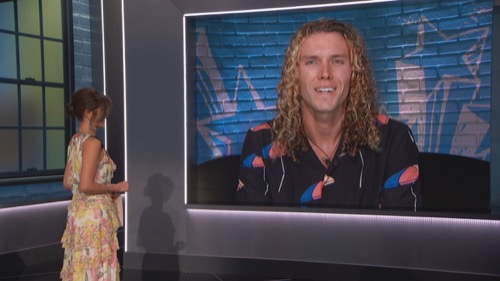 Tonight on CBS Big Brother 22 airs with an all-new Sunday, August 23, 2020, episode and we have your Big Brother 22 recap below! On tonight’s Big Brother season 22 episode 8 “Nominations & Safety Suite Competition,” as per the CBS synopsis, “Tonight on Big Brother it is eviction night and either Nicole A or David will be sent home.  Following the live eviction, the Head of Household competition will be held.”

Tyler is back in charge, he is the HoH. Janelle says that it totally sucks to come so close to getting HoH and to lose. She thinks that she and Kaysar are going to be a target this week. Meanwhile, David is feeling like a beast, the second week and he is still there. Da’Vonne is happy that Tyler won, she has an alliance with him.

Everyone is called to the living room. The Have Nots are congratulated for making it through the week, it is time for them to pick a Have Not for the week. David chooses Enzo, Kaysar chooses Cody, Christmas chooses Bayleigh, Nicole says she is picking someone who likes to talk about her, Janelle.

Nicole has been on Janelle’s radar since day one because she says she plays a snake game. And, she can’t stand her nasal voice any longer.

Janelle tells Memphis that he should play the Safety Suite and save either her or Kaysar, he doesn’t really answer the question and averts eye contact with Janelle, she knows something is up.

Kaysar is Janelle’s ride or die, season six, seven, and the current season. They are the strongest pair in the house, and in order to stay there, they have to do anything they can.

Tyler tells Cody that he is thinking straight up Kaysar and Janelle, Christmas laughs and asks if he even needs a speech.

Dani overhears a conversation between Da’Vonne, Bayleigh, Janelle, and Karysar; then tells Tyler that they are working together.

The Safety Suite is now open, houseguests have one hour to decide if they want to enter. Memphis, Enzo, Dani, and Nicole are the only ones with eligible passes. Dani thinks she has to play, that way it won’t look like she is on team Tyler.

This is the last week to use the pass, so Nicole feels like she has to do it to show that she doesn’t feel safe in the house. Nicole is the first houseguest to enter the Safety Suite. Memphis is next enter, but he plans on not winning, he doesn’t want to have to save anyone. Enzo uses his pass, and so does Dani. Da’Vonne is going around the house and asking everyone to save her.

Nicole is first to have to complete the Safety Suite challenge. This week’s safety has been locked inside the safety vault and her job is to steal it. Here is how it works, on the horn, Nicole must make her way through the maze of lasers to retrieve the safety sphere. At any point, if she hits a laser, an alarm will go off. She has to hit the button to turn off the alarm and reset the lasers, then try again.

Once she completes the maze without hitting the lasers, she has to hit a button to lock in her time. Nicole has troubled the sphere is bigger than she is. Memphis is good at the challenge, so he sits for five minutes on the sphere to pass the time, because he doesn’t want to win. Both Dani and Enzo want to win, they think it would be good for their game to save someone.

Time to see the results; Nicole 15:36, Memphis 14:33, Enzo 4:41, Dani 6:04. Enzo wins Safety Suite, and now he must pick his plus one for the week, who will get a punishment. Enzo chooses Christmas. Memphis’ numbers are an absolute joke and Janelle knows that he threw the competition.

Kaysar goes into the HoH room to speak to Tyler, he tells him that he has a lot of respect for him, and he knows that his name is getting tossed around. Tyler tells him that he was right from the beginning, but his name was thrown around and it hurt his feelings. As crazy as it sounds, Tyler really likes Kaysar.

Kaysar says he doesn’t want to promise him anything because of his power, he respects whatever decision he makes. Janelle is next, she goes to see Tyler and tells him that she doesn’t know if she is a target or not. Tyler says he heard his name was thrown around from her and Kaysar and it hurt his feelings.

Time for the nomination ceremony, Tyler has to name two people for eviction. He nominates Kaysar and Janelle.