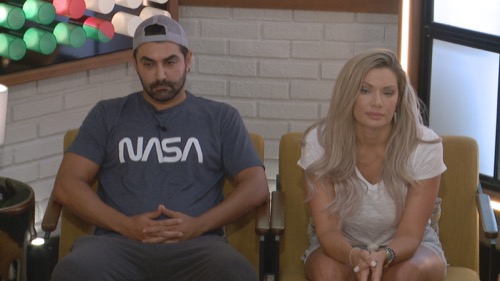 Tonight on CBS Big Brother 22 airs with an all-new Sunday, August 26, 2020, episode and we have your Big Brother 22 recap below! On tonight’s Big Brother season 22 episode 9 “PoV and Ceremony,” as per the CBS synopsis, “Tonight on Big Brother it is another Power of Veto competition.  Both Janelle and Kaysar will fight for their chance to take themselves off the block.  Following the competition, we will have the ceremony to see if the winner will use the PoV.”

Cody is happy Janelle and Kaysar are on the block, now he just wants to win the PoV. Tyler tells Da’Vonne that he loves his new crew and he is happy they have his back. She warns Tyler that Janelle is great at competitions.

Da’Vonne is playing hard, she sits down with Janelle and Kaysar and tries to secure her ties with them.

Janelle asks Bayleigh if she would play for her if she got house guest choice, Bayleigh says yes. Sadly, Janelle doesn’t know about the alliance that Bayleigh is in with Tyler.

Nicole asks Dani who she would take to the final four with her. Dani’s strategy is to plant seeds with everyone, so she tells them what they want to hear. She is aligned with Enzo, but she is not sure if he is just around for the ride. And even though she is aligned with Bayleigh and Da’Vonne, she knows that they are each other’s number one. She really likes Tyler but doesn’t think she can beat him, so he will have to go sooner rather than later. Right now, Dani just wants Tyler to get rid of her biggest target, Janelle.

Time to pick the players for the Veto competition. Tyler gets Cody, Kaysar gets Bayleigh, Janelle gets Memphis.

Bayleigh is feeling extremely cornered, Dani tells her not to play the Veto if she wins.

Kaysar can’t believe the disaster of a Veto competition that they have coming to them; Cody, Memphis, and Tyler are all on the same side.

Time for the Veto competition, players have to grab their aprons and head to the backyard. This competition is called Cupcake Clash. Here is how it works, Christmas will draw the names to determine the first round match up. In each head to head match, they will begin with all their cupcakes mixed up. The goal is to move the puzzle pieces around until they build an entire pink, yellow, and blue cupcake. The icing must be on top with the cake in the middle.

They have to transfer one piece at a time, and not place any pieces on the ground. The first player to build all three cupcakes correctly in each match rings the bell and advanced to the tournament. The first match is Kaysar against Tyler. The second match is Cody against Bayleigh. The third match in Memphis against Janelle.

Tyler wins the first match because Kaysar makes a rookie mistake, he puts the cupcakes on the wrong bases. Cody wins against Bayleigh. Nicole sees that Memphis is obviously throwing the competition, and Enzo sees it as well. In the end, he wins over Janelle, so maybe he wasn’t throwing it. Cody, Tyler, and Memphis are all advancing. Cody wins over Memphis. It is down to Cody versus Tyler. Cody wins the PoV.

Cody wins, Janelle knows that she is in definite trouble, she has nobody in this game besides Kaysar.

Dani, Christmas, and Nicole talk about how they believe Memphis was throwing the competition but when he noticed people becoming aware of it, he stopped. Dani thinks he wanted Janelle to win so she could stay, he is double-dipping.

Kaysar is down on himself, Janelle tries to cheer him up and says she is sorry. They both agree that regardless, they are happy they got to spend time together and catch up. There is a bond between the two, and that is dangerous in the house. Kaysar thinks they should try to make a deal to stay in the house, Janelle thinks they have nothing to lose.

Enzo, Cody, and Tyler talk about Memphis, on how he looked like he was trying to throw the competition. Tyler didn’t even trust him to begin with, and now this just makes it worse.

Christmas gets her Safety Suite punishment, the plush star cries like a baby and has to be taken care of for an entire week. The baby needs around the clock attention, which means, Christmas has to wake up to tend to it. Christmas gets a second-star baby, then another one; its triplets, then come the fourth, and the fifth and sixth. Then triplets arrive.

Janelle goes to see Cody and tells him that she didn’t come back to be taken out in week three, furthermore, it is good for his and Tyler’s game if she stays. She tells him that if he uses the Veto on hair, she will vote with him for the next two weeks and take out the floaters. Cody knows she is a huge target and can be a shield for him.

Time for the Veto meeting. In the end, Cody doesn’t use the Veto. It will be either Janelle or Kaysar who leave the Big Brother house this week.