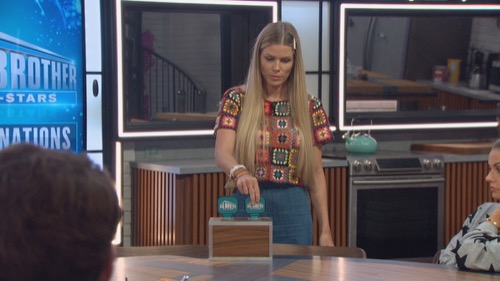 Tonight on CBS Big Brother 22 airs with an all-new Thursday, September 16, 2020, episode and we have your Big Brother 22 recap below! On tonight’s Big Brother season 22 episode 18 “PoV and Ceremony,” as per the CBS synopsis, “Tonight on Big Brother it is a special night and we are having the Power of Veto competition and after the competition, we will see the PoV ceremony.”

Dani nominated David and Kevin because they are the only two who she hasn’t talked game with. Tyler is her real target, but right now, she thinks it is too early to target him. On Tyler’s side, he is worried that he could be backdoored. David is feeling down, but now that down, he has his disrupter power and plans on taking himself off the block. There was a sliver of hope for Kevin to not be used as a pawn, but obviously, he is not that convincing. David is trying to have fake tears, it works, he wants the house to think he is upset and not suspect that he has a power.

Cody can see Dani use Tyler as a backdoor option and that would be bad for this game. He tells Enzo and both don’t want to see him go up.

Christmas goes see Dani and Cody is in her room. They talk about the powers; they all claim to know nothing.

Everyone is called to the dining room, the disrupter power has been unleashed. Dani is freaking out, she is already upset about her nominations and doesn’t want to feel worse by having to change them.

They all take a seat, Dani is told the disrupter has chosen to disrupt her power by taking one of her nominees off the block so she has to name another one. The nominee who is off the block and safe is David. Since David has been saved, he cannot be named as a replacement nominee during the Veto. David puts those acting skills to use and starts crying, he doesn’t want people to that he had the power and used it on himself. He cries that he thought people wanted him gone, everyone consoles him. Dani is told that she has to name a replacement nominee, she names Tyler.

Dani is so uncomfortable, everyone is looking at her so strangely. Kevin can’t believe that Tyler is on the block with him, he is a comp beast. Tyler is not surprised, even though he made a deal with her. But this could be a blessing in disguise, he could win the Veto and take himself off the block. Dani speaks to Tyler in the HoH room, she tells him that she panicked, and she doesn’t want him out.

He can win the Veto. Tyler doesn’t buy out, he knows he wronged her but she made a deal. Tyler sees where he stands with Dani, now he has to win the Veto and save himself fair and square. David goes around the house asking people if they used the power to save him. Tyler and Cody don’t buy David’s reaction, they think David used it on himself. But that doesn’t deter David from asking everyone.

Time to pick the players for the Veto competition. Dani picks Da’Vonne, Tyler picks Ian and Kevin picks Enzo. Enzo wants to win to take Tyler off the block.

Da’Vonne speaks with Dani and tells her that she is going to try her hardest to win today. Dani begs her to win, she doesn’t want to have to nominate someone else.

Time for the Veto competition, everyone gathers in the living room. The players are going to have a chance to get out of the house and grab some microbrew. But the only way to get there is with the tele-transponder. The players have to stack 15 microbrews into a pyramid using giant tweezers. The first person to do it wins. The rest of the houseguests are watching from the living room, they watch as the player’s hands are shaking. Enzo says you can breathe on the microbrews and they fall, they are so delicate. Ian’s strategy is to go slow and steady.

Everyone seems to get the first row, but when they get to the second one, they start falling. The person doing the best is Tyler, but then he drops everything and has to start all over again. Da’Vonne is also doing well, but then she drops. Kevin is close, he has two left if he doesn’t drop. Kevin drops. Nobody is giving up, they keep dropping, but the keep doing. Da’Vonne is on her last one, she does it. Da’Vonne wins the PoV. Dani is upset, she didn’t win and she just hopes that Da’Vonne does what she promised. Kevin is begging for Da’Vonne to use it on him. Tyler is trying to think of another strategy to help him stay in the house.

Da’Vonne goes to speak to Dani, she tells her she is conflicted about the Veto. Da’Vonne is close to David, she may use it to take him off the block, but she is worried if either doesn’t win HoH next time, they will be picked off together.

Dani meets Cody, he says he wouldn’t vote off Tyler. He tells her that she is the single person who can convince Da’Vonne not to use the Veto. Dani goes to see Da’Vonne and tries to discourage her from using the Veto. Da’Vonne is not happy about it, she finds that Dani is only happy when she is doing something for her.

Time for the Veto meeting, Da’Vonne chooses to use the Veto to save Kevin. Dani has to name a replacement nominee, she chooses to name Ian and tells him that he is a pawn, her target is Tyler. Nicole is crying, everyone else looks upset. Da’Vonne came to play the game and her first taste of power, she is thrilled. Tyler is hoping that being on the block with a former winner, might save him in this house. Ian knows people are seeing “winner on the block,” and he is so upset.