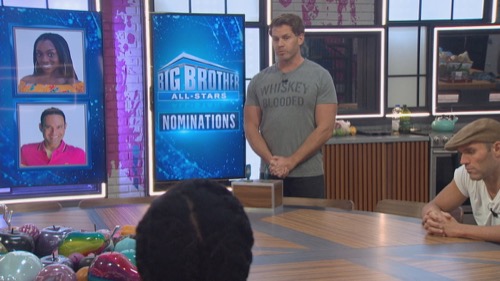 Tonight on CBS Big Brother 22 airs with an all-new Thursday, September 23, 2020, episode and we have your Big Brother 22 recap below! On tonight’s Big Brother season 22 episode 23 “PoV and Ceremony” as per the CBS synopsis, “Tonight on Big Brother it is the Power of Veto competition and Kevin and Da’Vonne will be trying their best to win and get off the block.  Following the competition, the PoV Ceremony will be held. ”

Memphis nominated Da’Vonne and Kevin as pawns, his real target is David who is not an ally of his and they have never talked game. Kevin is on the block now for the fourth time, and he says it is annoying. Memphis tries to hint to Kevin that he is not the target, but he doesn’t want to tell him that David is the target, just in case David wins the Veto.

Cody is super happy that Da’Vonne and Kevin are on the block and he hopes the nominations stay the same. Da’Vonne thinks that Memphis wants to backdoor David, little does she know that she’s got it right. Kevin is crushed that he is on the block with Da’Vonne, they are friends and he really cares about her.

Time to pick the Veto players; Memphis chooses Tyler, Da’Vonne gets houseguest choice and chooses Nicole, Kevin gets houseguest choice and chooses Dani. Memphis tells his alliance that he is backdooring his alliance, and he wants himself, Tyler, Dani, and Nicole to through the competition so Da’Vonne or Kevin can win and take themselves off the block. Nicole and Dani think it is stupid, Dani says she is sick of Memphis.

Memphis then goes to tell Da’Vonne and Kevin that the plan worked, neither of them are going home. And, he tells them everyone is going to throw it. Da’Vonne doesn’t trust anyone and tells Kevin they have to win it. Tyler goes to speak to Memphis who tells him that he wants David to go home, Tyler doesn’t like it, he feels like he could use David as an ally.

Tyler then goes to speak to Cody and tells him what Memphis wants to do. Cody is not happy, he feels that Kevin and Da’Vonne are bigger threats than David. Cody tells Tyler that he has to play for the Veto.

Zingbot is back to roast the houseguests. He asks Enzo what is more pathetic than a man over 40 calling himself meow, meow – nothing. He calls Cody a perfect 10, well his IQ. He asks Christmas, what is the difference between her, and the holiday season, one is annoying and cold, the other is the holiday season. He wrote a song for Nicole, “here comes the bride, she loves to wine and cry, every time I hear her voice I want to die.”

Nicole says that was worse than she could have ever imagined. Zingbot says that he is running an intergalactic tiger sanctuary. He is known around the galaxy as the tiger king, but some of his alien tigers have escaped and he needs their help. He tells everyone to go inside because only one person can enter at a time.

Time for the Veto competition, welcome to the Zingbot botanical garden zoo filled with twists, turns, and tigers. The zoo is in trouble and Zingbot needs help returning the intergalactic tigers to their cages. Here is how the game works, they hit their button to start the clock, then race into the zoo, from there their job is to track down the three alien tigers, then return them one at a time to their correct cages. Once they believe they have done it, they should exit the zoo and hit their button.

The Veto players have finished; Kevin did it in 5:33, Memphis 3:29, Dani 3:41, Nicole 4:22, Da’Vonne 6:53, and Tyler 2:55. Tyler has won the Veto. Tyler knows he has some explaining to do, Memphis told him to through it. Da’Vonne says this is the worst-case scenario. Da’Vonne thinks that Memphis is a liar and wouldn’t be surprised if Tyler didn’t use the Veto. Memphis goes to see Da’Vonne and Kevin and tells them that Tyler obviously didn’t throw it, but the plan is the same, he is going to speak to Tyler. Memphis speaks to Tyler, tells him that he wants David gone. He asks Tyler what is the plan. Tyler tells him that he thinks that Nicole and Dani are working side deals with Da’Vonne because she was not put up and he was.

Time for the Veto meeting, Tyler decides not to use the Veto. Memphis can’t backdoor David this week, but he is happy to cut off Dani and Nicole’s side deal. Kevin thinks he will survive, he calls himself the Big Brother phoenix. But, Da’Vonne is a fighter, so it will be interesting to see who actually goes home.