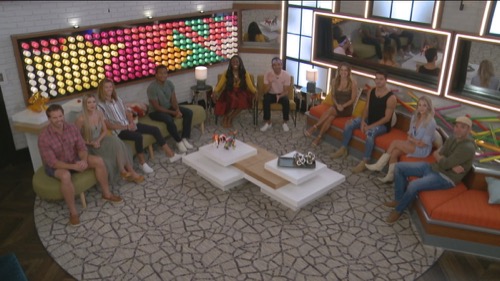 Tonight on CBS Big Brother 22 airs with an all-new Thursday, September 27, 2020, episode and we have your Big Brother 22 recap below! On tonight’s Big Brother season 22 episode 23 “HoH and Nominations” as per the CBS synopsis, “Tonight on Big Brother is the Head of Household competition.  Also we are having a visit from Doctor Will.  Following the HoH competition they new HoH will make two nominations for eviction.”

The houseguests are intrigued about the prizes that Dr. Will mentioned. Nicole doesn’t feel bad that she lied to Da’Vonne because she voted to keep her in the house and kept her word to her regarding that. Meanwhile, Christmas believes that Nicole and Dani were the two votes to keep Da’Vonne in the house. Nicole lies to Dani, says she didn’t vote to keep Da’Vonne, but Dani knows she is lying. Dani tells Nicole that she is wondering if she should use her power, Nicole tells her to do it.

Nicole tells Cody that she is worried about Dani using her power; she goes on to say that she is not afraid to go after Dani now. Dani goes to see Memphis and tells him that she is frustrated, she has a power, and she is willing to use it on him today. If she does, he can play in the HoH. Memphis doesn’t want anything to do with this idea, he just came off HoH and wants to blend into the carpet this week. After speaking to Memphis, she decides to use her power.

A message comes up on the TV screen, the REPLAY power has been activated. Everyone sits down to hear what it is. They are told that this power allows the outgoing HoH can play in the new HoH competition, Memphis will be playing. Memphis doesn’t want to play, he just wants to stick to his game plan.

Time for the HoH competition; outside there is a golf course, gold bars one side, a shiny HoH key on the other side. The power is up for grabs, but so is a big prize. The houseguests have to put three balls in this competition. With each put, they must decide if they are going for the power of HoH or the $10k prize. The lowest score wins. If there is a tie for the prize, it will be split. Tyler and Dani split the 10k. And, Cody wins HoH.

Kevin is in tears, Cody winning means that he has a hard week ahead of him. David is frustrated and hopes he isn’t targeted this week, he says it sucks not to win. Enzo feels great that Cody won, let him get his hands dirtier. Dani is super excited that she won the money, but she is not telling anybody, neither is Tyler. Dani peeks in the kitchen and sees David cleaning out the fridge, he says he is frustrated so he decided to keep himself busy. Nicole says the Christmas looked really upset when he won HoH. Little does she know that Christmas wanted to put her up against Dani. Dani is afraid of Christmas and wants to convince Cody to put her up. Christmas going first from the Committee wouldn’t be a bad thing for Cody’s game.

Enzo goes to see Cody in the HoH room and tells him they are in a good spot. Cody is thinking of nominating David and Kevin. Enzo tells Cody that Memphis has a Wise Guys alliance with Christmas. Enzo doesn’t want Cody to get rid of David and Kevin, he wants to make some big moves. After having the conversation with Enzo, Memphis hedging his bets with two Wise Guy alliances is starting to make him think. Nicole and Cody are alone, she asks him what his plan. He says Kevin and Christmas. Nicole tells him that is stupid, he is doing Dani’s dirty work. Cody tells her that Christmas, Enzo, and Memphis have a final three, so Christmas will be coming after him.

Kevin knows he has to go upstairs and talk to Cody but finds that talking to him is like getting stabbed in the eyeballs. Kevin asks him not to put him on the block, there are bigger targets in the house. Kevin tries to promise him his jury vote. They get into an argument and Kevin tells him that the world doesn’t revolve around him. Kevin tells him to do whatever he needs to do. Kevin really turned Cody the wrong way by threatening his jury vote.

Time for the nominations; Kevin is the first houseguest nominated and David is the second.