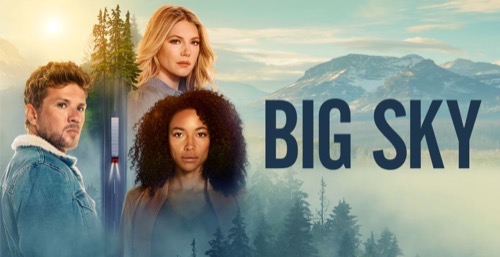 Tonight on ABC their new thriller by David E. Kelley, Big Sky premieres with an all-new Tuesday, November 17, 2020 episode and we have your Big Sky recap below.  On tonight’s Big Sky season 1 episode 1 ‘Pilot,’ as per the ABC synopsis, “While on a road trip to visit her boyfriend in Montana, Danielle Sullivan and her sister Grace are kidnapped by a truck driver on a remote part of the highway, setting off a chain of events that leads private detectives Cody Hoyt and Cassie Dewell to team up with Cody’s estranged wife and ex-cop, Jenny Hoyt, to search for the sisters.

But when the investigators discover these are not the only girls who have disappeared in the area, it’s clear they’ve stumbled onto something much bigger than them all.”

Jenny Hoyt was in a mood. She found out her soon to be ex-husband was sleeping with one of her friends and she took that as a betrayal. It didn’t matter to her that she was separated or that she wished her ex-husband would meet someone else. What mattered to her is that he was with a friend of hers. It wasn’t even just any friend. It was her best friend. Jenny truly cares about Cassie. They were really close. They talk all the time and she told Cassie things she never would have told anyone else however Cassie abused that trust. She listened to Jenny complain about her husband and she thought that meant he was now free for her. Cassie started sleeping with Cody. She didn’t regret it and she didn’t try to deny it either.

Jenny hadn’t waited long to confront Cassie. She did it within moments of finding out. She asked the other woman outright if she was sleeping with Cody and Cassie didn’t deny it. She tried to excuse it. Only she didn’t try to deny it. Cassie claimed that Jenny didn’t want him anymore and so that’s when Jenny said that separation doesn’t mean the same thing as divorce. Jenny is still married to Cody. She also believes that they could have worked things out before now and so a part of her blames Cassie for ending their marriage because there was no way back from this. It was a betrayal. Jenny was feeling hurt and angry. She wanted nothing to do with Cassie or Cody and that spelled trouble for their working relationship.

The three of them were involved with a private detective agency. They have a snoopy assistant who apparently knew about the Cody and Cassie thing and so now Jenny doesn’t trust her either. Jenny has no one she can trust. She fled the detective agency and no one can reach her. Cody later tried to call her. She wasn’t returning his calls and he was getting frustrated. He let some of that frustration out on Cassie. Cassie and Cody were supposed to be just fun. It wasn’t fun anymore and it was clear that Cody never cared about Cassie. He dismissed her. He dismissed her concerns and so Cassie went looking for Jenny because Jenny was really all she had left. She later found Jenny at a bar drinking her woes.

Cassie tried to reclaim their friendship. It didn’t work out for her because she and Jenny got into a huge fight. They had needed to be bailed out from prison after they got into some trouble for their big fight. It was Cody who paid their bail. He got a good talking to from Denise the assistant and he realizes now that he shouldn’t have slept with his wife’s best friend. It didn’t matter if he thought the marriage was over. It wasn’t a line he shouldn’t have crossed and so now he’s trying to make amends for it. Cody picked up the ladies from the police station. He took them home and he tried to talk to them in the car. They didn’t want to hear it. They also didn’t want to hear each other and so Jenny let Cassie know that this fight didn’t fix anything. She was still pretty upset.

The three of them were so wrapped up in their own drama that they weren’t doing what they were good at. They weren’t being investigators. There was a crime spree happening in their backyard and neither they nor the police knew about it. There was a trucker who was murdering prostitutes. He even killed a woman that Jenny spoke with and he went on to kidnap two young women after they ticked him off. They had almost got hit by his truck. They wanted vengeance so they pulled ahead of him and they called him names. They called him a “loser”. Which was a sore point for him because the mother he still lives with had also called him a loser just that morning and so he was feeling low as it is when he came across those two young women.

The young women were sisters. They came off the freeway because they heard of a car accident up ahead and they thought they would take the back roads, but the car hadn’t been maintained in a while and so they got stuck on the side of the road with only the trucker they ticked off. The trucker was Ronald Pergman. He came up to their car and smashed a window. He used the stun gun on them. It was the same one he used on the prostitutes and he was a deft hand at using it. He’s been killing for a while now. Ronald also usually chose prostitutes because no one goes looking for them when they disappear and so he made a mistake when he kidnapped the sisters. The sisters were expected at one of them’s boyfriend’s place. And the boyfriend was Justin Hoyt.

Justin called his parents when he hadn’t seen his girlfriend or her sister. Cody and Jenny had still been together because they fell into bed and they were doing the best to work out their problems. They were, therefore, close on hand when their son called them. Justin told his parents about the missing sisters and they promised him that they would look for them. Both Cody and Jenny called Cassie. They got her looking for the sisters as well and they called Montana State Troopers. Cody called one state trooper because he thought it was just the sisters that went missing. However, the state trooper told him that it been several women that have gone missing lately and they’ve been keeping it quiet until now.

The state trooper that told Cody this had also gone back on the street. He wanted to find the missing teenagers and him leaving like that in the dead of the night had upset his wife. He and his wife haven’t been getting along lately. She hates it that he calls her mother with their kids all grown up and out of the house. She also hates it that she can’t discuss menopause with him because he finds it icky. Rick and Merrilee have their issues. Rick just didn’t let that stop him from looking for two missing teenagers. Rick met up with Cody and they shared information. Cody told him about the prostitutes that have gone missing from truck stops. He also mentioned how a certain church in the area has been flagged and so Rick agreed to go with him to check the church out.

Rick got into the car with Cody. He waited until Cody lowered his guard and then he killed him. It turns out Rick was working with Ronald this whole time. That’s how Ronald’s been getting away with it.