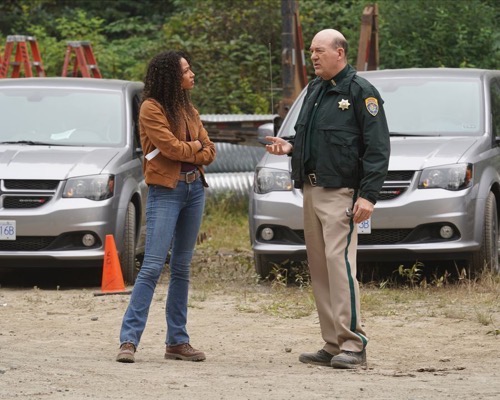 Tonight on ABC their new thriller by David E. Kelley, Big Sky premieres with an all-new Tuesday, November 24, 2020 episode and we have your Big Sky recap below.  On tonight’s Big Sky season 1 episode 2 ‘Nowhere To Run,’ as per the ABC synopsis, “Forced to form an unlikely team, Cassie and Jenny set out to continue the search for the missing girls.

Meanwhile, Danielle, Grace, and Jerrie get to work on planning their escape, leading Legarski to struggle with the consequences of his actions as a distracted Ronald deals with a difficult relationship with his mother.”

We see Ronald, he is on a bulldozer, there is a huge hole dug and he puts the girl’s car and Cody’s truck in the hole while Montana State Trooper, Rick, watches. Then, Ronald starts to cover them up.

In town, Cassie asks Jenny if she heard from Cody, nobody has. Back to the farm, Rick asks Ronald if he believes in irony. He says the irony here is that he picked him because he had good judgment. Ronald says they should talk about his good judgment, how he shot an ex-cop in the head. He says they take girls that won’t be missed, the ones they scrape off the bottom of their boots, but he took two wholesome girls who Cody was looking for, and he already thought a long-haul trucker was lurking around. Rick gets a call, Cassie is now looking for Cody and he has a predicament. Meanwhile, the girls are all in some sort of metal container. Grace tells Danielle that her mother had a tracker on her phone. Grace says maybe once the guy’s rage passes he will let them go. Jerrie says he wanted to talk with her, nothing else, he is a very lonely person. Grace says good, how do they play on that.

Cassie is on the way to see Rick and she is just thinking about Cody. Ronald in the meantime has arrived at home, his mother, Helen, makes a comment about him being out all night and not calling. Then she continues on and on and he tells her he is sick of her, then gives her a rose. She asks him if he is ok, he is all pent up and should go to his room and masturbate, then come down for lunch. As he is walking away, she notices an injury on his neck and asks him what happened, but he walks away.

Cassie walks in to see Rick, he tells her that she is beautiful and they don’t get many black beautiful women in Montana. He offers her coffee, but she says she is good. He says Cody wasn’t too keen on hearing him, he was a bit of a renegade, when he brought up probable cause, it went in one ear and out the other. He claims to have told Cody he would have to fly solo on this one because he was being argumentative. She asks him why he would let a private citizen to go it alone. Again, he says she is a pretty little thing, and he can’t afford to lose his pension because of this thing. She asks if he tried calling Cody if he was worried about him. He asks what she is implying and she says she is just trying to get a feel for things. She says she wants to go to the compound, will he come with her. Again, he says they need probable cause. Then he says why not, he will try to get a warrant. She says in the meantime, she will try to stop at some truck stops, there could be a link to long-haul truckers. He taps his hat and looks at her, she walks out the door.

Cassie calls Denise and tells her Rick is creepy, Denise says he is harmless. Cassie claims to have a vibe. Rick knocks on Cassie’s windshield and asks if he can have a private word, she hangs up the phone and lets Rick in her tuck. He asks why she locked the door, she says habit, something her father taught her, strangers, even people you think you know but you don’t. He asks her if she carries a gun, she says yes. He says he never used his gun. He asks her if she ever wondered what it felt like to pull the trigger. He says it can be the wild west, no place for a pretty girl. She says she trained at the academy, he says she didn’t graduate, he did his homework. She asks him if his goal is to intimidate her because it is not working.

Jerrie says she made the mistake of climbing into Ronald’s rig, she works in human services. Danielle tells Grace that Jerrie is a boy. Danielle asks Jerrie if she has a penis, she says yes. Grace asks Jerrie to please excuse her sister. Then, they hear Ronald, he is coming downstairs and opens up the container door. He has a bucket in one hand and a bag in another. Danielle says please, he says she called him a loser.

He says she did it twice and yelled it out. He asks how old she is, she says seventeen. He smells her hair and says it smells pretty. Then he asks Grace her age, she says sixteen, then he asks her name and smells her hair. He says she probably thinks he is evil, but he is not. Grace tells him if he is going to be a monster, at least be an honest one. She punches him and breaks his nose, then rubs his blood on Grace and tells him that he will kill her. Jerrie tells him they are just kids, do what he wants to her, but leave them alone.

Jennie walks into the café for coffee, Melissa asks her if there is a way to report a missing person. A prostitute, Jerrie, who always comes in there, has not shown up. Jennie is with Cassie, they are looking at the there have been more than 500 murders on the local highways, 200 suspects, mostly all long-haul truckers. Cassie believes that Rick is involved.

Ronald goes to see Rick, his nose is not broken. He says they are all pretty, especially the sixteen-year-old and she is probably a virgin, they would get triple for her. Rick says they are not marketable, he doesn’t think Canada will dare take them. Ronald gets a call from Helen, he shouts that he is busy and smashes the phone on the table. He says she is giving him a hard time and says that driving a truck is no way to making a living. Rick says they are noble. At home, he has the same problems.

Cassie is talking to Denise, she says she has a bad feeling. The day her husband died, she knew all day without even knowing. She had a bad feeling then and has one now. Goody two-shoes Risk is all over this, Denise says she hopes she is wrong.

Grace tells the girls they need two plans of survival. They need to get into an emotional bond, and she is their best bet because Ronald was smitten with her. Jerrie says he wants to be liked, he thinks that Ronald has mother issues. Grace says that Ronald says he sings, so do they, maybe they can play on that with Ronald. Jerrie asks if it was a church choir, Grace says yes, then she says people like him tend to be religious, maybe they play for his soul.

Ronald is unlocking the chains to the door that goes down to the girls, he hears singing and is surprised. He stands there and listens. They hear a noise, he unlocks the door to the container and tells Jerrie aka Michelle, that it is time to go. He says he has clothes, shampoo and it is time to clean up. Grace calls him a jerk and says her uncle is a cop and she texted him his plates, it is only a matter of time. He tells her that she is lying. Jerrie is brought into an area where there is water for her to shower, he says he will turn the other way.

She asks what is going on, he says she is going to another place tomorrow, to do what she does, but it will be safer. He tells her to wash her hair and not make him use the taser again. She gets naked and turns around, she tells him to turn around, she wants him to look at her. She takes off her wig and he see s that she is a man. Jerrie returns to the other girls, she is ok. She says he had a plan, but now the plan is ruined. Jerrie says they are into trafficking, they sell them off as sex slaves, she showed him that she is a man it got her out of there, but she is still here. Grace tells Jerrie that they got them.

Cassie is gone to see the trooper’s ex-wife, Denise set it up.

Rick is upset, he asks Ronald if he is sure that Jerrie has male equipment, he says he is positive. Rick says they should go home, sleep on it, and pray on it. Ronald says sorry, Rick says things are about to take a turn. Rick gets a call from his ex-wife, tells him that Cassie was at her home asking questions, and she is not a fan of his. Rick is furious.

Ronald is home, he quietly goes into his mother’s room and tells her that he couldn’t sleep. Meanwhile, back in the container, the girls are singing. We see Cassie home, she is in bed with her son and hugs him. Ronald crawls into his mother’s bed, she hugs him.