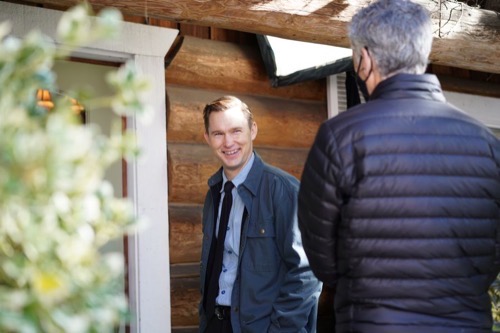 Tonight on ABC their new thriller by David E. Kelley, Big Sky premieres with an all-new Tuesday, December 8, 2020 episode and we have your Big Sky recap below.  On tonight’s Big Sky season 1 episode 4 ‘Unfinished Business,’ as per the ABC synopsis, “Unsatisfied with the investigation now that the girls’ disappearance has made headlines, Cassie and Jenny take things into their own hands, tapping into their individual strengths to make headway in the case.

Meanwhile, Legarski attempts to keep cool, but Ronald takes a different approach to protecting himself. Still captive, Danielle and Jerrie tend to Grace, who makes a painful decision in an attempt to save them all.”

The girls have been missing now for four days, Ronald is watching TV and sees Grave’s mother making a plea for her return. His mother walks in and says young pretty girls missing, coincides with his urges, does he have something to tell her. He dumps his bowl of cereal on her head. She says she cuts the crust off his sandwiches to show him how she cares for him, not like how he is treating her. He asks her where this is coming from, he doesn’t like it. She tells him that she thinks there is more good in him than bad, and when the day comes that she believes there is more bad in him, it won’t be a good day for him.

Grace is not doing well, she is burning up from fever. The food that Ronald left for them has maggots on it, Grace tells the girls to put in on her wound, she read that they will eat the infection in her leg. Meanwhile, Jenny is with Walter and urges him to help, she needs to find her husband. Walter puts out a call to speak to Legarski.
At home, Cassie looks a little undone, her father tells her that he may have given her bad advice in the past, she should maybe sit down and have a good cry. He tells her that she has been on the run for a long time. He asks if she is in love with Cody, she says maybe.

Legarski knows that Walter wants to see him, Ronald is nervous, he tells him it is not good that he wants to talk to him. Ronald tells him that his mother came right out and asked him if he had anything to do with the girls disappearing. Legarski is upset, he shouts, “why is she asking?” Ronald tells him not to yell at him. Legarski tells him that he is a loose end. Ronald says if anything happens to him, a trail goes right to him. Ronald says he is closest to him and his mother and it is a shame that he doesn’t know understand that he will do anything that he has to. Legarski laughs at him and walks away.

Ronald goes back to see the girls, he sees Grace lying down and Danielle says that she is drying. Ronald goes inside, Jerrie says she is going downhill. Ronald pours peroxide on the wound, he then gives her medicine for the fever. He tells Grace that she is going to be ok, she vomits. The girls start yelling at him and telling him that she is dying, he goes out and locks the door.

Legarski meets with Walter, he laughs off his questions and says he spent seconds with Cody and this is all in Cassie’s head. Walter tells him that he is drifting off point. Legarski starts shouting at him and tells him that he is doing a backflip for Cassie. He says he is sick and tired of going the extra mile for people and then being questioned and having to defend himself. Outside the station, Legarski is leaving and Jenny and Cassie walk up, Jenny says that Cody was last seen with him. He turns around to Walter and says, “see what I said, open season on the badge.”

Ronald stops by a general store, he buys a quilt. He is just standing there staring at the sales clerk, he tells her that she is beautiful. She clearly feels uncomfortable, he tells her she looks sad, then he says he is sorry, he has over stepped. He asks her to a taxi dance, and it is really creepy the way he is looking at her. He tells her before he leaves that it would really be his pleasure to dance with her.

Ronald is with Legarski, he tells him that Grace is not fit to be moved, she needs antibiotics. Legarski says he will head out there, all of a sudden, he doesn’t feel well. He says he is not well, he killed two people.

Cassie and Jenny are trying to go over the file again, the truckers. Jenny tells Cassie that they can’t wait around for Legarski to make a move, they have to do it. Jenny wants to go undercover as a prostitute. They have a tracker on Legarski, theey are watching his every move.

In the container, Grace feels hotter. Legarski arrives and says he heard that someone has an ouchy. Jerrie tells him off, he says he is going to wash her mouth out with soap. He tells Grace and Danielle that the two wholesome girls got caught up in the web. Legarski pricks Grace with a needle full of antibiotics.

Cassie is thinking about time she spent with Cody, she is at home. Her dad notices that she is not herself, he asks her what is wrong. She says her son asked her what life is about and the only thing that came to mind was cruelty, but she didn’t say that to him. He says nobody could have prepared her for her mother taking her own life or her husband coming back from Afghanistan in a body bag. He tells her that she has to go on for her son, just like he does.
Jenny is undercover, but she doesn’t have a wire, Cassie tells her to keep her cell phone on.

It is the night of Ronald’s dance, he is dancing with a woman when the owner of the store walks in and he couldn’t be happier. She turns around to leave and he runs after her calling her quilt lady. She says she is leaving, she is old enough to be his mother. He says he is just looking for a dance and some company. He tells her that she looks really lonely and they have that in common.

Jenny is undercover, she gets inside Jasper’s truck. He has lots of hand sanitizer, he says he is a germaphobic. Then they both gargle. He tells her that his name is George, she says she is an undercover police officer and she is taking DNA from his truck. He wants to see her badge again, they get in a scuffle, he pulls a gun on her and Cassie comes running and tells him to drop it.

Cassie and Jenny are in front of Walter, he is not impressed with what they did. Meanwhile, Ronald is dancing with his girl, she tells him that she is not sure what this is. She says usually when men dance they want it to go somewhere. He says he was hurt before and just wants to dance, it is safe and they can’t get hurt.

Legarski’s tracker shows Cassie and Jenny that he spent a half hour in the middle of nowhere. Legarski calls Ronald and asks where he has been, he says he was busy. Legarski says he is at the end of his rope, his wife walks in it’s midnight, Merrillee says that she was dancing with a customer from work. She is not having an affair, but she will settle for dancing.

Cassie and Jenny head to the location where Legarski spent in the middle of nowhere. Cassie is a little uneasy, she would like to call for back up. They get out of the truck and turn on their flashlights to look around. Cassie sees a door to the building, they go inside. Cassie shouts out the girl’s names.

They climb up a structure that leads them to another door, that slams shut. Inside the container, the girls hear the noise, they start screaming and banging the walls. Jenny tells Cassie that they have to move, Legarski could be on his way back. The girls continue to scream and we see Legarski head upstairs to the bedroom, with a hammer in his hand.