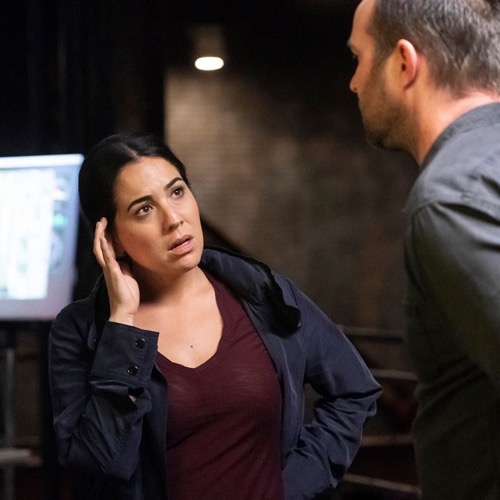 Tonight on NBC Blindspot airs with an all-new Friday, May 14, 2020, episode, and we have your Blindspot recap below. On tonight’s Blindspot season 5 episode 3 called “Existential Ennui,” as per the CBS synopsis “When an op goes bad, the team must deal with a proverbial monster in their house before it can take them down one by one. Meanwhile, Director Weitz is forced into a tense game of psychological chess as Madeline Burke attempts to assess his loyalty and root out a potential mole at the FBI.”

Their little mystery friend sent them another message. The message was a picture of a level-two sculpture from Wizardville. The people that took over the company have been doing some interesting things and the one thing they haven’t changed is that they take real events or in this case objects and incorporate them into the game. In this case, the very sculpture was being a mystical staff. It also led to a hint about Madeline Burke and the team couldn’t ignore it. They all wanted to return to their normal lives. They couldn’t do so until they took down Madeline and so the team decided to follow this clue.

They followed it to World Apex Industries. A company that appears to be a shell company for Dabbur Zann and again that tied in Madeline. She was working with DZ. The team thought if they checked out this company themselves that it might take one step closer to getting their lives back and unfortunately something went wrong. Kurt, Jane, Zapata all went together. Zapata spotted something was off and she did her best to warn her team. Then there was a moment of confusion. Patterson lost their signals and she had no idea what happened to her friends. She and Rich initially panicked.

Except they hadn’t. Zapata and Jane were still missing. Zapata later returned to the bunker and so Kurt asked her what happened. He wanted to know why Zapata aborted the mission. He thought she must have seen something and she hadn’t. She said she shouted abort because she had a gut feeling. She had felt shaky back at the warehouse and she felt that was her gut telling her something was off. Kurt got angry at her for trusting her gut. He thought she panicked for no reason and she shouted at him that they never really had a plan. They had gone in with no intel or plan to escape. Zapata accused Kurt of being so focused on returning to his daughter that he risked everything.

Kurt was angry because he thought Zapata overreacted. He also wanted to know what happened to his wife and so he threatened to go back to the warehouse to find her, but luckily he didn’t need to. Jane came back and she brought a prisoner with her. Jane had seen an opportunity after they had scattered. She had grabbed one of Dabbur Zan’s men and she took him back to the bunker for questioning. She wanted information on Dabbur Zann. Jane thought she could break him and as she was preparing to do so the rest of the team had found out about a prison break. Three suspected members of Dabbur Zann escaped police custody during a prison transfer.

The team knew right away that Madeline was behind this. They thought their prisoner might help them put the pieces and the man refused to cooperate. He said the ringleader, a man who goes by the name Hades, has tortured family members of people who talk. Their prisoner didn’t want to put his own family at risk and so he hadn’t wanted to say anything. He was going to remain, mum, until his interrogators reminded him that it might look like he ran. He disappeared from a terrorist organization and they’re not going to be giving the benefit of the doubt. They were going to suspect the worst. They were going to think he ran and they would go after his family anyways.

Their prisoner knew his family was a risk. He wanted to protect them and at the same time, he had information to barter with the team. Like how he knew their location. The prisoner said he awake during the transfer and so he knows where they are. The team had panicked. Some questioned whether or not they should poison him with Zip to erase his memory. Jane had been against it because she never really forgave herself for doing that to her brother and so Jane convinced the team not to hurt the prisoner. She thought she was doing the right thing. She was alone with the prisoner when he turned on her.

It turns out he wasn’t some underling. His real name Zico Faulhauber and he was one of the men that had been broken out of custody. He wasn’t scared about frightening Hades. He was Hades and he probably didn’t even have a family. He waited until he was alone with Jane to make his move. He knocked her out and he escaped. He couldn’t have made it far. The team had quickly found out about his real name and Kurt revived Jane. Jane and the others began finger-pointing about whose fault this all was. It was the Rich that snapped them out of it. He reminded them that there was a terrorist running around their bunker and that they needed to find him before he could make it to the outside world.

The team let got of their pettiness. They focused on finding Zico and they later got to him before he could escape. He had tried taking Zapata, prisoner. He threatened to kill her if the team didn’t put down their guns and so Jane took the shot. She killed their one lead to protect Zapata. The team now had no one with insight on Dabbur Zann and Madeline grows more power-hungry by the day. She was aiming to make herself president. She doesn’t care how many people she has to go through to get there and she’s threatening everyone who even dared to raise their head against her. Weitz had to watch as Briana was murdered by Madeline because Madeline wanted to prove she could kill anyone at any time.

Madeline ordered Weitz to get rid of Susan Shaw for her. He has no choice in the matter. He has to follow through and so he really needed someone to take down Madeline. Sadly, he couldn’t be a part of helping anyone anymore. He was too scared and so the team was on their own.

The team managed to find a flash drive on their dead terrorist and so that at least gave them one more lead.

And it turns out Zapata wasn’t having gut feelings. She was just freezing and she didn’t know how to fix it or return to her old self.