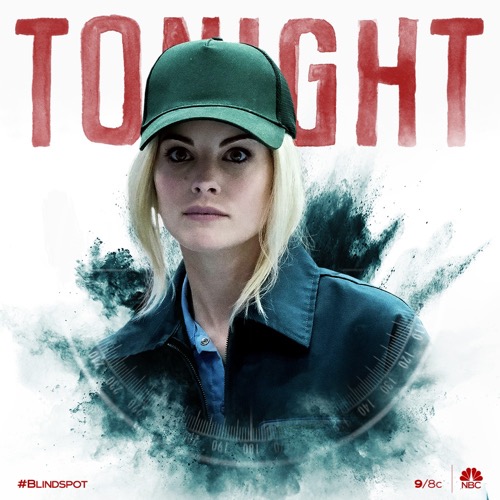 Tonight on NBC Blindspot airs with an all-new Thursday, June 25, 2020, episode, and we have your Blindspot recap below. In tonight’s Blindspot season 5 episode 7 called “AWL In” as per the CBS synopsis “In an effort to stop Madeline from shipping two planes full of ZIP to the US, the team splits up into a high-stakes undercover mission where they intercept Madeline’s son. Meanwhile, Madeline interrogates an old ally to get information on Kurt and the team.”

Patterson found out where the Zip was being manufactured. She and the team wanted to prevent it from being used for something nefarious and so they found a way to destroy the supply at the facility. Patterson and Rich destroyed all they found. However, Madeline Burke has additional supplies located throughout the world and so the team didn’t really stop her. They merely delayed her. Burke told Ivy that she still has some ZIP in two other countries and so Ivy made preparation for it to be flown back to the States. The team was monitoring her open channel between her and Burke when they picked up on the part where she was still going ahead with preparation for ZIP.

Patterson did some digging. She found out Ivy and Dabbur Zann were sending out two teams to Libya and Hungary. The team decided to split up and head to the two countries. Rich had an in with a friend from Libya. He went there with Zapata who trained there during her first CIA mission and Jane meanwhile went to Hungary with Weller. The two teams both had the same objective. They were going to find the ZIP before it could move and destroy it. Rich and Zapata left first. They at least knew the ZIP was in Tripoli and so Patterson kept an eye on the situation as they made it to Libya.

Rich and Zapata had quickly found out they were one step behind. The ZIP was being moved as they made it there and so Zapata came up with the big idea to get it off the plane. She pretended to be a doctor. She snuck her way onto the plane and before she could make it to the Zip – that’s when the plane decided to take off. It took off with Rich still on the ground. Rich wasn’t able to help Zapata and she was now on her own. Zapata was going to have to look out for herself. Not even Patterson could help her because there was nothing they could do until the plane landed and so the second team had to carry out the mission.

Weller and Jane left for Hungary. They were off continuing the mission as Burke came across Weller’s ex. The same woman who was the mother of his only child. Burke didn’t get her hands on the child, but she did on the former girlfriend and she threatened to hold her indefinitely without a trial if the woman didn’t help her. Burke said Bethany had already lost her father. Losing her mother too would be devastating for the little girl and so Burke pressured Allie into working with her. She only found Allie thanks to Ivy. Ivy had gotten the information out of Weller when she was interrogating him and Ivy hadn’t told Burke about Weller’s capture because he ultimately got away.

Ivy and Burke were both keeping secrets from each other. They only were working together now because they both wanted to carry out a terroristic attack on US soil. Only the team was standing in their way. The team had found the first ZIP supply and they were close to second and third. Zapata had met Burke’s son on the flight to Jordan. He was a doctor and he thought his mother was providing supplies to the refugee camp in Jordan. He had no idea he was carrying ZIP. He also hadn’t wanted to listen to Zapata once he remembered her from new reports. Zapata had to make him listen by pulling a gun on him and that’s when she told him the full story.

Zapata told Greg everything. She told him that Burke was a terrorist and that her new job title of Director of Federal Law Enforcement was just a stepping stone for her. Burke wanted to rule the world. She wanted to be able to do anything she wanted to and kill anyone who stood against her. Burke was a horrible human being. Deep down, Greg knew Zapata was telling the truth and that’s why he didn’t want to look into the crates. Zapata told him that if he did, he would find ZIP. She reminded him that it had been banned everywhere in the world and that it was so dangerous that no one wanted to use it.

Greg hadn’t wanted to any of it. He was refusing to believe his mother was dangerous and so Zapata told him his mother murdered his father. Zapata told him how Burke smiled as she talked about drugging her husband’s coffee one morning. Burke had enjoyed murdering her husband and she did it because she wanted to take over his position at HCI Global. She did it so that when she killed everyone at HCI Global – there was nothing stopping her from taking the company and using it to exact her own revenge. Burke hated big government. She blamed it for her father’s death and so that’s why she was dismantling everything.

Burke was evil. Her son came to see she was evil and he helped Zapata destroy the ZIP. Zapata did what she set out to do. Her team also did what they were supposed to do and they destroy the ZIP they found in Hungary. Weller had found out about Allie. He hadn’t let that get in the way of finishing the mission and so he held onto the fact that Bethany wasn’t seen with Allie. The little girl wasn’t with her mother because Burke didn’t have her. Bethany was still out there and that meant she was safe for now. And so the team didn’t realize that Allie was sending out a message to the CIA or that the team was getting help from them with all these coded messages.

The team was still in the dark. They soon heard back from Greg who offered to help them, but Greg was later found out by his mother. She found out he had been in contact with Zapata and so she turned on him. She drugged him with ZIP so that he wouldn’t remember anything. He was then moved to a secure site that no one knew about. This included his mother. She didn’t want to know where because she didn’t want anything to derail her plans.