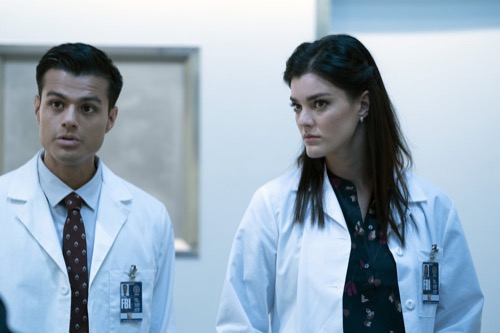 Tonight on NBC Blindspot airs with an all-new Thursday, July 9, 2020, episode, and we have your Blindspot recap below. In tonight’s Blindspot season 5 episode 9 called “Brass Tacks” as per the CBS synopsis “With the surviving members of the team captured and held in FBI custody, Madeline and Ivy are in the final stages of their plan, but a few unlikely allies come out from the woodwork, trying to stop her before it’s too late.”

The team is in mourning. They believed Patterson died in the bunker. They believed it because Rich had been there and he supposedly witness his friend blowing up in an explosion, but appearances can be deceiving. It turns out Rich hadn’t seen everything that happened. He didn’t see how Patterson got out nor did he realize that she was in fact still alive. Patterson had found one of the miner tunnels and she used that to escape the bunker. She was now free. There was no one looking for her because they all assumed she was dead and so that meant Patterson was the best position to finish what the team started. She was going to take down Madeline Burke.

Only it wasn’t easy rising from the grave. Patterson was alone and without allies. She had needed help if she was going to take down someone as powerful as Madeline. Madeline was on the shortlist for becoming the next Vice President. She will soon have all the power she wants and so Patterson has to stop her. Patterson turned to Boston of all people. Boston had been exposed after Keaton was captured and so he was on the run too. Boston was a great asset. He was willing to do anything for Patterson and that included going along with her most outlandish plan. Patterson contacted her old friend Afreen at the FBI.

Patterson sent the other woman a coded message. The message was about parking structures and it was so boring that the censors wouldn’t pick it up. Patterson also had to make sure Afreen wouldn’t ignore the message. She added Afreen’s social security number to the message headline and that was too big for someone like Afreen to ignore. She read the message. She spotted Patterson’s online signature and her first response was a relief. She was glad Patterson was still alive. Patterson is a friend of hers and Afreen would do anything to help her. She even brought Director Weitz into this. She included the director and that was good because Patterson needed his help as well.

Patterson’s plan is to break into the FBI servers. She needed Weitz’s fingerprints to get into that room and it was, therefore, a good thing that he was there to help. Weitz hadn’t really wanted to help. He was too afraid of Madeline to come up with a plan of his own and so he was still thinking about going on the run, but Patterson’s reappearance put an end to that. Patterson and Boston broke into the FBI headquarters. They used gender-bend disguises. Patterson dressed as a guy and Boston as a woman because the FBI’s facial recognition couldn’t read their faces if they appear as a different sex.

Their disguises worked. They got into the building and they met with both Afreen and Weitz. Weitz used his fingerprint to get them into the servers. Both Patterson and Boston hacked the system. They made a recording of everyone in their interrogation rooms and then broke a couple of their friends out. They got Zapata. They got Rich. They were still working on the servers when Madeline’s team detected a breach. She ordered that the building be locked down and that forced the lockdown protocol. This gave Patterson less time and what she found by then had been troubling. Patterson found out that Madeline was pinning all of her crimes on Weitz.

It was Madeline’s backup plan. She knew if she was ever caught that all her crimes would come to light and so to prevent that she pinned it all on Weitz. She’s been planning this for months. She had blackmailed to stay around and then she used the fact he was still nearby to manipulate the evidence. Patterson found all of this supposed evidence. She told Weitz about it and he freaked. He wanted to go on the run again. He disappeared as Patterson was explaining everything and so the team was forced to write him off. They couldn’t force him to stay if he didn’t want. Weitz disappeared and he ended up leaving before Patterson and Zapata had come with a conclusion to clear his name.

Patterson was able to connect Madeline’s crimes back to Madeline. She had needed to get the news out there and so that’s where Zapata stepped in. Zapata called Reade’s ex-fiancée Megan. Megan is a journalist. She was worked for the New York Star and Zapata was asking her to print an unconfirmed story. They couldn’t get all the evidence to Megan. She would just have to trust them at their word that they were innocent and the team wasn’t done there. Rich had used the air vent systems to break into the room where Weller was being held. Someone had walked in on them and that someone was a friend.

She pretended to be overpowered by Weller. She made them handcuffed them to the table as they got away and that was proof that the whole building was suspicious of Madeline. Madeline was losing control of the situation. She was caught off guard when Patterson set off the alert to evacuate the building and she still thought she could just kill off the team when her lawyer informed her about a problem. He told her his friend with the New York Star had a story on them. He told her that they had all this evidence and he also mentioned how they lost their blackmail material on the VIPs. They couldn’t blackmail their way out of trouble.

The lawyer felt that they had lost. He was cutting his loses and he was going on the run. He advised Madeline to do the same. Only she refused to. Madeline still thought she could win and she thought she had when the team had been recaptured, but that’s when Weitz showed. Weitz came back with a few loyal FBI Agents and they gave the Dabbur Zann a hella of a gunfight. Weitz’s action had freed the team again. It was just unfortunate he was shot in the battle and so they had to call an ambulance for him. And sadly the ambulance couldn’t arrive fast enough, Weitz died from his injuries.

The team mourned for him. They also still needed to get Jane back and so Weller left with Zapata to go free her. They managed to track her down. They got to Jane as she was being transported and they then took on her guards. Both Weller and Zapata saved Jane. The whole team was later reunited and now that they were back together – they worked together to find Madeline. She was at an airfield. She was going to take off when the team convinced her pilot to keep her grounded and so they got to Madeline. They were taking her when she drank some poison. Madeline killed herself because she hadn’t wanted them to use her to find the ZIP bombs.