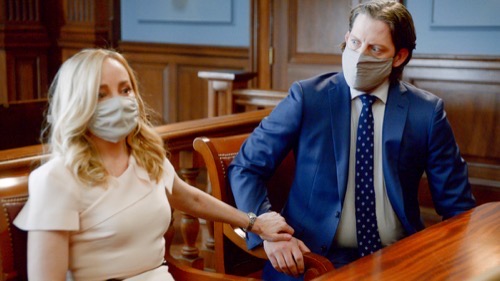 Tonight on CBS their drama Bull inspired by Dr. Phil McGraw airs with an all-new December 14, 2020, episode and we have your Bull recap below.  On tonight’s Bull season 5 episode 4 Fall Finale called, “The Ex-Factor,” as per the CBS synopsis, “TAC braces for an un-jolly Christmas when Bull and Benny represent Marissa and her estranged husband, Greg, in federal court after they’re charged with money laundering and fraud connected to Greg’s restaurant.

As Bull and Benny defend the divorcing couple together so the prosecution can’t use them against each other, they search for jurors who will believe Marissa had no knowledge of Greg’s business dealings.”

Marissa is in trouble. She was in trouble with the FBI because the federal agency was really after her husband and she just got swept into because of her connection to Greg. Greg and Marissa are still married. Their current issues don’t protect her from the fact Greg’s restaurant was in both of their names and that he was seemingly using the restaurant to carry out money laundering. Greg was in business with a man by the name of Douglas Scott. Scott is a known drug dealer. He used the restaurant to clean his dirty money and to hide it from the feds. It was textbook money laundering. It also was tax evasion and whatever else the FBI were willing to throw at it. The FBI don’t care about Marissa or the state of her marriage because they wanted to use her to get to the men.

The men like her husband. Greg was the one running the restaurant and he was responsible for the money laundering. He hadn’t told Marissa what he was doing. She doesn’t even know that Scott was into drugs before now and so she couldn’t help the feds. If she had credible information, she could help them build a case. She could also work to get immunity for herself and so her being in the dark here was hurting her. Marissa didn’t know anything. She met Scott once at a party. He was a potential investor at the time and Greg had said he wanted to work with him. Marissa never had any other dealings beside that with Scott. She didn’t know what his business was and her husband never went into details with her.

The restaurant was in both of their names because it was easier to file on the taxes. Marissa and Greg both thought their second chance at marriage would work out and that they would have a family. It had come as a surprise when they ended up separated again. They tried to make it work and they couldn’t. Their marriage was now over. Their second chance was over and still Greg’s mess became Marissa’s mess. Marissa called her friends after she had been dragged down to the federal building. She had wanted help and they had come running. They were there as it was explained to Marissa what happened and when Marissa was offered a deal. She was told she would walk away if she could just flip on Greg and Scott.

Only Marissa couldn’t do so. She told the FBI she knew nothing and so they chose to arrest her. The feds were going to take both her and her husband to court for money laundering. Marissa asked TAC to defend her. They happily agreed and they also explained to her that they had to defend Greg as well. Greg needed lawyers that were thinking of Marissa’s best interests. Greg was probably offered a deal and so he needed lawyers that would help fight the charges not tell him to turn on his wife. Bull and Ben explained this to Marissa. She hadn’t liked it, but she agreed to it because it was best for everyone and so TAC offered their services to Greg who accepted it. Greg didn’t know defense attorneys. He also hadn’t realized how much trouble he was in.

Greg allowed Scott to become a partner at the restaurant because he was bad at business. He was great at running restaurant and keeping the place packed. He was just bad at dealing with money. He went into business with Scott because Scott had said all the right things. He said he would take over business side and that Greg didn’t have to worry about it ever again. Which is what happened. Scott had been a business partner at several other restaurants in the city and they all said great things about him. They also said he knew what he was doing. He took over the business side and suddenly the restaurant had enough cash to pay the staff plus keep the doors open. They went from making a seven thousand dollar loss to having a surplus. Greg never suspected a thing.

Greg didn’t suspect because he didn’t want to know. The evidence was pretty clear that something fishy was going on and everyone could see it but him. One member of his staff began dating one of Scott’s men. She went from being a reliable member of staff to showing up late and on drugs. Greg fired her. He gave a big speech to the rest of the staff that nothing involving drugs will be tolerated and yet he couldn’t see that the problems began with Scott. Greg didn’t see it because he didn’t want to see it. The evidence against him and Marissa were damning. They signed off on everything and Marissa’s signatures were on things she couldn’t walk back because she only signed for her husband. She didn’t look into any of it.

Marissa now regrets her actions. She also couldn’t believe how naive Greg was when it came to restaurant. He didn’t know Scott before this and to trust this man so explicitly seemed foolish. Marissa and Greg got into a huge fight. She asked him why he didn’t notice the restaurant was suddenly doing well and he said you don’t check the weather when the sun is shinning. Marissa later repeated that conversation when she was on the stand. She had been asked why she didn’t investigate Scott and she said she trusted her husband and now his mistake has become her own.
Greg felt Marissa dropped him in it with her testimony. He decided that he had to fire TAC as his defense team and later on Greg chose to be an adult. Greg made a deal with AUSA.

Greg is willing to go to jail for three years as long they dropped the charges against Marissa. He’ll also testify against Scott and so Marissa remembered why she married him. Greg isn’t a bad man. He was a good one who made a mistake and so Marissa invited Greg over for Christmas. They even smiled at each other and that smile was a first in a long time. It’s the Christmas season. The season of miracles and while Marissa is remembering an ex with fondness, Bull was being proposed to by Izzy. Izzy knew how important it was to Bull that they were married as their raise their daughter and so she proposed tonight. And he said “yes”.