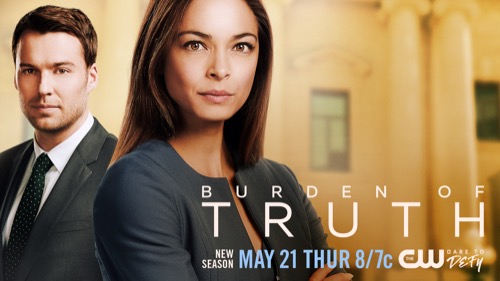 Tonight on the CW their legal drama Burden Of Truth premieres with an all-new Thursday, May 21, 2020, episode and we have your Burden Of Truth recap below. On tonight’s Burden Of Truth season 3 episode 1 premiere called “Crawford Chang” as per the CW synopsis, “Now a couple with their own firm, Joanna Chang and Billy Crawford face a tough verdict after disagreeing how to handle their first case. Looking for a break.

Billy convinces Joanna to return to Millwood for a high school reunion. However, when an old friend from Joanna’s past suffers a devastating loss, Joanna is forced to face long-buried demons from her past.”

So make sure to stop by tonight between 8 PM and 19 PM ET for our Burden Of Truth recap. While you wait for our recap make sure to check out all our television news, videos, recaps, spoilers, and more, here!

Joanna and Billy arrive at court. Inside the courtroom, Joanna defends the family of a deceased temporary worker who was killed on the job. She received no training. The deceased was a Muslim. Joanna gets the employer to admit that he didn’t know her name.

Luna is working. One of her employees reports seeing a blue truck, the same one from last week. Minutes later, they both see a familiar red car. Luna’s coworker Taylor gets close to the car, watching from a distance. A male physically removes a woman out of the car, kicking her before he leaves her there.

Owen visits a newly paroled man Sam who got off easy for murder. Owen tells him he will be watching. Meanwhile, Joanna and Billy are back at the office. He tells her she could be a little nicer to employees. He senses she is on edge. She says she is fine until the phone rings. Before she answers, she shares that tomorrow’s is the anniversary of her father’s murder.

Dianne is on the phone and asks Joanna to come to their high school reunion. Joanna doesn’t want to go. She says she will try. As she talks with Joanna, Dianne swears she sees Sam in her rearview mirror. After speaking with her employees, she heads to the bathroom to take a pregnancy test. Later, she heads to court where she and Billy learn they didn’t win their case. On her way out of the courtroom, she stops walking, looking as if she is going to have a panic attack.

Back at the office, Joanna and Billy tell their employees they may have lost but that is ok. They need to move on.

Dianne tells Owen to talk. She shares she saw Sam. Owen tells her he has been released. Meanwhile, Luna doesn’t receive a warm welcome at the firm when she arrives. The employees know she is Joanna’s sister.

Luna and Taylor stake out the area where they last saw the red car. Sure enough, he shows up again. Luna stops Taylor from trying to make her way into a home he has slipped into.

Joanna and Billy decide they will go to her reunion together.

At home, Luna tells Taylor she cannot put them in danger again and act like a vigilante.

Joanna arrives at the reunion with Billy. Dianne has a surprise for her. Kodie is there. She is clean now and doing well. They hug. Meanwhile, Owen and Billy catch up. Billy admits he and Joanna are having some tough times. He has been giving his brother money. Joanna doesn’t know. The mayor stops by to ask Owen to try to be nice to Sam.

Joanna decides to drive Kodie home. Billy tells her to be careful. When they arrive at Kodie’s house the police are there. They tell Kodie to stay back as they escort her daughters out of the house and away. Kodie screams and cries. She doesn’t know what is going on.

Back the station, Owen tells his men he wants to know next time they pick up children for child services.

Dianne, Joanna and Billy sit with Kodie. Dianne has faith Joanna can help. Joanna has a panic attack just. Talking about it. She runs out the door. She is kneeling on the ground, trying to catch her breathe. Billy comforts her. They. Can go home. She says no. They head to the lawyers house. He bumps up the hearing to 48 hours from one week.

Joanna and the others all talk about the challenges they have ahead. Owen arrives and shares that Kodie was cited for neglect.

After Luna falls asleep, Taylor sneaks out and heads back to the house of the man. Meanwhile, Joanna tells Billy because she didn’t cross the line on their case they lost. They are paid to win.