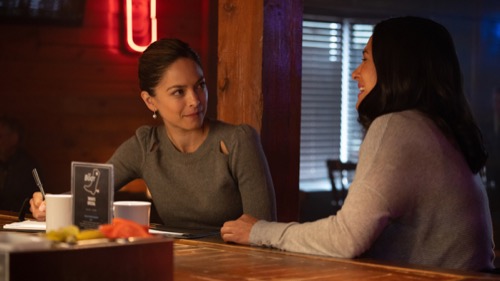 Tonight on the CW their legal drama Burden Of Truth with an all-new Thursday, June 18, 2020, episode and we have your Burden Of Truth recap below. On tonight’s Burden Of Truth season 3 episode 5 called “Crisis Of Faith” as per the CW synopsis, “With more potential cases of wrongful child apprehensions, Joanna and Billy investigate Millwood Family Services and discover a potential error in the custody hearing evidence that will change everything in the case and in their lives.”

Kodie can’t stop thinking about the girls being taken away. She spends a lot of time alone, crying on house arrest.

Billy and Joanna talk about Kodie. She is worried. She is also worried about others who have lost their kids unlawfully.

Owens’ boss tells him he needs to apologize to Sam but Owen refuses. His boss isn’t happy. Meanwhile, Billy and Joanna go through the files of children taken away. They talk to Luna. They need her to look into the personal information that was redacted. Kat can help. Luna is hesitant to go to the Millwood Police Station.

Billy and Joanna speak with a pastor who also fosters. They don’t get much from him.

Kat comforts Luna when they arrive at the police station. Luna has a hard time going in. She cries. But pulls it together and goes in alone. She sees Owen and gives him a hug. Owen tells her he cannot release the files to her. Luna refuses to back down.

At the bar, Diane and Joanna talk. Joanna believes she isn’t pregnant and she is really tired. It. Has to be the case. Diane gives her information about a school she should talk with. They head there and find out the school is an ally with Family Services.

Kat and Luna talk about their mothers. Kat lost her. They find a file while they talk about a kid who strangely wasn’t apprehended. Meanwhile, Billy talks with a mom who doesn’t know where her kid went. Billy heads to see the foster dad for the women’s kid. He learns the boy was adopted.

Kat and Luna visit the home of a woman they think can help. Luna knows the woman from high school. The woman shares that her kid wasn’t taken in because she is pregnant with him now.

Joanna is told the headmaster will not speak with her after all. She heads to see the mayor. She talks to her about funds and prevention. She learns that it is only. 10%. Meanwhile, the pregnant woman tells Luna and Kat she doesn’t know why a case was opened, they never told her.

Billy gets the files on the woman’s child and sees photos of abuse. Joanna heads to see Diane who mad because Owen isn’t home yet. They get to talking and Diane tells her she should take another pregnant test.

Owen approaches Sam at the bar to talk. Sam shares that the mayor appointed him head of an advisory committee for the police. Owen cannot believing it.

Joanna finds out she is pregnant after taking a test at Diane’s. Joanna has a thought. Maybe the test. Kodie took was broken. She heads to see Luna, Billy and Kat. They plan to fight the lab for data.

Joanna talks to Kodie and tells her about the test. Billy talks to the woman who tells him she tested positive for drugs and didn’t do anything. Her son’s father was the one who hurt him. She called Family Services.

Joanna confronts the manager of the lab. He doesn’t want to talk and tells her to speak with his legal team. Joanna goes to Kodie who wants to tell the six o’clock news. Joanna doesn’t want her to do that. Joanna knows how to win.

Owen packs his things. Diane freaks out. He tells her about Sam and how he needs to keep them safe. She tells him how he once threatened the kids and it was an empty threat. Owen believes he will do something.

Billy and Joanna talk about the case. He gives her an orange. She has been asking for one. Just when he says “I am never having kids” while looking at files, she shares she is pregnant.