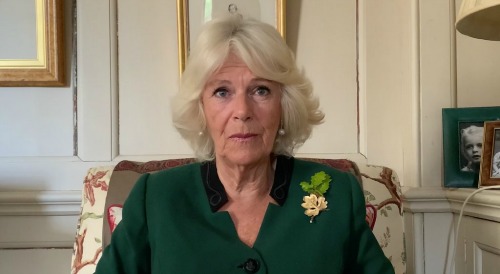 Camilla Parker-Bowles recently gave the public a rare look at some of her grandchildren, as part of her royal duties that she’s been carrying out while in lockdown at Birkhall, her Scottish residence with Prince Charles. Like the rest of us, Camilla and Charles have been isolating, but they’ve been able to carry out many of their royal duties via video calls.

On Monday, June 1st, Camilla released a video in her role as President of Royal Voluntary Service, in order to thank volunteers from across the country. June 1-5 is Volunteers’ Week, and Camilla Parker-Bowles wanted to send a personal message to those who were taking part in the mission for the week.

In the video, Camilla Parker-Bowles spoke about the history of volunteering, and about how volunteers are unsung heroes on the front line and at home. As Camilla clutched her glasses, she thanked all the country’s volunteers.

“Whether you have been volunteering for decades, or are newly on call, you are all the thoughtful people, giving your skill, your energy, and your time to support and care for others. The past weeks have seen a surge in volunteering, the like of which few will be able to recall.”

Camilla Parker-Bowles also described the recent surge of volunteering lately, and she said that she was incredibly proud of her country and the people’s willingness to step forward and help in these challenging times. Finally, Camilla thanked each volunteer.

Specifically, Camilla said: “May I salute all the unsung heroes gathered in today’s Virtual Village and thank each of you from the bottom of my heart. Thank you.”

It’s unclear exactly which of Camilla’s grandchildren were pictured in the photos, as they were visible on screen only from a distance. However, it was a personal touch that has received considerable attention. Be sure to check back here at CDL for more British royals news and updates.