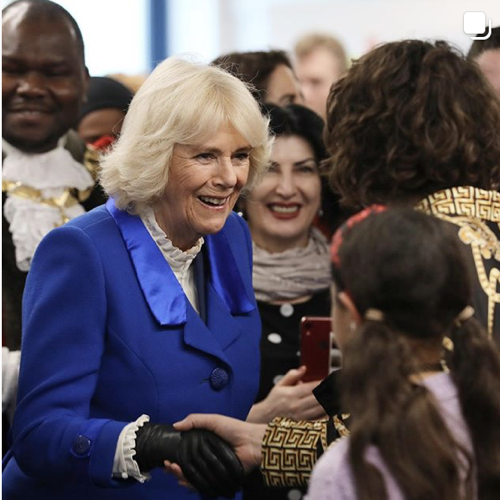 Camilla Parker-Bowles recently attended a royal engagement in London. She was photographed wearing thick leather riding gloves, even though the affair was hosted indoors. It is reported that the Duchess of Cornwall didn’t remove them for the entire event and even shook hands with her gloves on. Prince Charles’ wife allegedly wears them to protect herself against Coronavirus.

Duchess of Cornwall’s Thick Gloves – According to New Idea, a source told the website that Camilla didn’t take her gloves off the entire time she was at the London event. Nobody else had gloves on and certainly none that thick. While most people remove a glove to shake hands, Camilla didn’t even do this.

Coronavirus Fear – Whenever a new illness or an increased amount of people are diagnosed with an existing sickness, there seems to be some level of panic among the public. Human beings can sometimes go to extreme lengths in order to protect themselves from getting infected by whatever is going around at the time. Right now, it is Coronavirus.

It is speculated that Camilla wore gloves as a way to prevent getting the illness.

“To be fair, it must be unhygienic to have to shake so many people’s hands, but it just looked downright bizarre.”

More Royal Engagements Means Increased Risk – Camilla has been quite busy since the start of the new year. She has been attending royal engagements, visiting women’s prisons, hosting receptions for charities and spreading awareness about topics that are important to her. These include arthritis charities and supporting domestic violence survivors.

Camilla Parker-Bowles Should Just Wash Her Hands – With so many events on her calendar, that does increase the risk of getting an illness. However, so does going to the grocery store. It seems frequent hand washing would be more effective than wearing gloves. For one thing, if a gloved hand touches anything, such as your nose, mouth or eyes, then it won’t stop one from getting sick, which defeats the purpose.

According to the Centers for Disease Control and Prevention (CDC) the illness can be spread by coughing and sneezing. However, it is also possible to get sick by being within six feet of an infected person

Be sure to catch up on everything happening with the Duchess of Cornwall right now. Come back here often for Camilla Parker-Bowles news, and rumors!