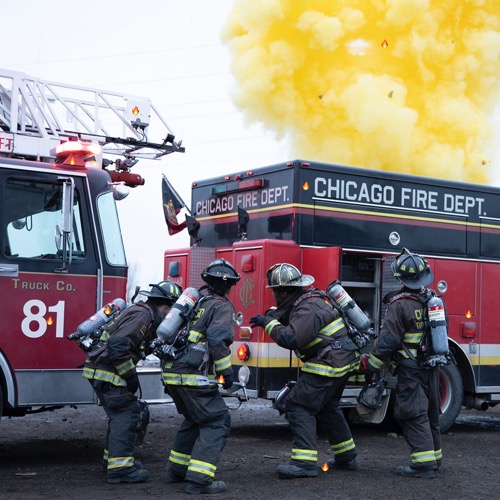 Tonight’s Chicago Fire season 8 episode 20 looks like it is going to be great and you won’t want to miss it.   While you’re waiting for our recap make sure to check out all our Chicago Fire recaps, news, spoilers & more, right here!

Stella Kidd (Miranda Rae Mayo) and Sylvie Brett (Kara Killmer) are really enjoying, training the girls in the neighborhood. Stella promises in this school they can achieve anything and no one will ever tell them they cannot do something. Meanwhile, Kelly Severide (Taylor Kinney) and Matt Casey (Jesse Spencer) walk with the new groom, Joe Cruz (Joe Minoso). Neither Matt nor Kelly want the mess around the table when Randy decides he is going to give the old 51 bells a shine. They are interrupted by a rubbish fire.

It looks and smells like chlorine gas and they have multiple victims. Severide and his crew quickly find the source of the leak. Severide is concerned as something is leaking into the chlorine; they don’t have time before falling to the ground and the barrel explodes. Cruz gets the employee to the ambulance as the others carry Capp to the ambo, he’s insisting he is fine but his one pupil is light blue almost white.

Severide wants to go to the site after shift and Chief Boden (Eamonn Walker) insists that Matt goes with him,

IN the bunker room, Emily Foster (Annie Ilionzeh) needs good solid advice from Kidd. She informs that she a meeting on the boards for Western. She wants to go back to med school. It is just a meeting but its something she had on her mind for a while. Stella thinks that is great as Foster feels guilty of abandoning Sylvie; Stella feels the best solution would be to talk to Sylvie’s face to face.

Ritter and Gallo are talking about Violet. He says there is no such thing as that in a relationship. Scott arrives with the baby, informing her they are moving back to Rockford. She promises to visit any time she can, quite saddened though.

Severide learns they are investigating the fire at the dump; they got to Chicago Med to see how Capp; is doing, but Will tells them that he signed himself out, Will knows he has to write a report to CFD but gives them 24 hours to figure out what is really going on with Capp. When they return to the firehouse they inform everyone that he left the hospital and isn’t answering anyone’s calls.

Kylie walks into the Firehall, greeted by Stella. Stella gives her her paper copy of the firetruck training manual; Stella gives it to her and offers for her to keep it as long as she needs it. Severide decides they are going back to the yard; Casey ordering Cruz to keep him under control. When the owner is questioned he is very defensive and orders them off his property.

Brett talks to Foster about Scott and baby Amelia are moving back to Rockford. She knows it isn’t far she will make it work as she won’t allow another person she loves to get away from her. She asks Emily what she wanted but the alarms sounds and they all are out again.

The women arrive at a Pottery class, here a girl is on the floor with her lips sealed with crazy glue, Sylvie works fast using acetone to separate them; everyone claps. While there, Will Halstead informs Emily that he was impressed with her reapplying to med school; something Sylvie was completely oblivious to Foster wants them to talk about it as Sylvie is frustrated because it seems she has already made up her mind.

AT Molly’s, the firefighters mock Gallio for staring at Violet, causing him to walk up to her wondering about them being “tense”.. She loves the idea that they can see other people. She claims she has a date with someone to the SOX’s game. Gallo returns to the guys, saying he was the one who mentioned the “dating other people” and she was all for it. Randy “Mouch” McHolland (Christian Stolte) tells him he is in the nonending war, just raise the white flag and just say “yes dear”. Christopher Herrmann (David Eigenberg)s says he needs to stand firm.

Casey and Severide stop the vehicle, sharing a story about Capp, after a few giggles the two of them knock on the door and it is open. The house is entirely dark and resting his eyes. They inform him if he doesn’t see Dr. Halstead he will be reported to the CFD. Casey leaves the two of them alone to grab them all beers. They exchange barbs about who is uglier.

Stella is pumped up for another girl on Fire day, She calls over Yvettem who says she hasn’t seen Kylie. Meanwhile, Kelly goes to OSHA to speak to Bob Resnick. Kelly knows he was assigned the chlorine leak that happened, revealing they have given them 3 fines and new training. Fines are not enough as Severide looks him in the eye and wants him to treat this case as a guy whose life and career are not at risk because of guys who just pay fines and keep doing the same thing. Stella is proud of him and wishes she had seen it. Stella talks about Yvette and how enthusiastic she has been and now has a weird feeling since she didn’t show up.

Stella sees Emily and tries to escape the other. Boden comes in and welcomes the floater replacing Capp, just as alarms sound, The scene is a car and a hearse; the coffin is crushing the driver as the firefighters work with the jaws of life to get him. He admits he does these runs all the time but never asks what is in it. Kelly tells his crew they are going back to the scrap yard. The truck is thrilled to see that the scrapyard has been shut down with huge yellow signs everywhere.

Sylvie finds Matt, saying Capp is going in for some tests. He says Severide feels Capp’s pain like is it his own. Meanwhile, Violet arrives at Firehouse 51 demanding to talk to Gallo. She tells him that he needs to mellow out, as they are only casual and he can’t be messaging her 5 times in a day. He wants her to call him Blake. He admits that when she told him she was going out with another guy and he didn’t like it. She says it was his idea. She says they should break up and he responds by saying “Maybe we should get married”. She calls him weird and leaves. Back in the mess hall, they all look at him weirdly.

Stella calls Kylie, wanting to make sure she is okay and tells her to call her any time day or night.

Capp comes out of his medical appointment, revealing to Matt and Kelly that his eyes are no good and he was done being a firefighter. Kelly catches him and they leave after a few more shifts he will be back. At Molly’s, they all celebrate Capp as Herrmann announces free beers on the house.

Emily walks the halls and is called in for her interview. She admits that when she made that mistake she was not ready, but she gets that now. She explains the people she has worked with for the past 3 years and with the help, she was able to transform herself into a kinder, caring paramedic and be able to handle whatever is in the trenches. She knows how to be a great student but even a better doctor. He interview officially begins.

When she is done, Sylvie Brett is waiting for her, telling her that they will let her know as Brett reminds her that they would be lucky to have her.