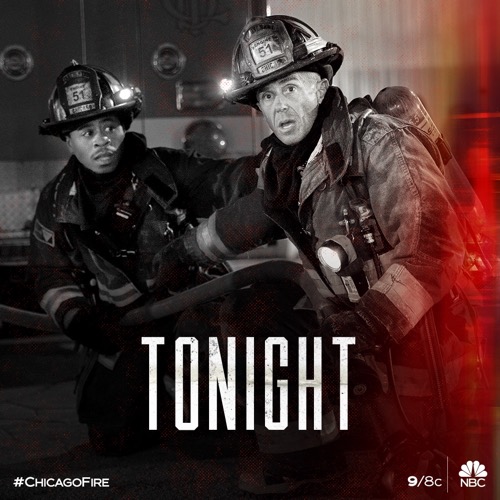 Delaney while Foster, Kidd and Brett fear Capt. Leone has it out for them. Boden mulls a procedural overhaul.”

Tonight’s Chicago Fire season 8 episode 11 looks like it is going to be great and you won’t want to miss it.   While you’re waiting for our recap make sure to check out all our Chicago Fire recaps, news, spoilers & more, right here!

Stella bows out of a one night stand that has now happened twice with a firefighter from Firehouse 20. Meanwhile, Chief updates some of the guys he is headed to a seminar. The team gets called to the scene of a couple stuck in their car with the hood on fire. Drake shows up with his team and tells Matthew he will take it from here. Matthew doesn’t think so especially when they can’t get the doors open on the electric vehicle. They get the female out but the male doesn’t have a pulse when they go to get him out of the car.

Back at the station, Kelly and Matthew tell the Chief how Ladder 20 showed up again and called it their jurisdiction. He tells them to put it in a report and put it behind them. Some of the team discover the firehouse dog has fleas. But after a closer look, they realize it is bed bugs. They all need to leave the firehouse. The chief tells them they need to stay at Firehouse 20. They all arrive, miserable. The chief addresses the tension and tells 20 they do not own the streets. After they all step away, the chief and Drake have words. He thinks Kelly and Matthew are young and cocky. The chief sees it otherwise.

One of the female firefighters at Firehouse 20 brings the ladies to a special area where they can stay. They wonder why she is being nice and what she is up to. Drake asks Matthew and the guys to move their trucks. They have words and end up pushing each other around until the chief comes out to see what they are up to.

The ladies head to dinner. The same female firefighter is there serving pasts with a smile. They are nervous she may have done so to it!

Chief sees an old friend Mike from Firehouse 111 at the seminar. Mike speaks at the seminar about cancer. He was diagnosed last year. This is one of the biggest threats for those on the job. He only has 6 months to live.

Mike talks about how to limit exposure so that others on the job don’t get cancer. Back at 20, Stella wants to use the treadmill but her one-night stand is on it. They realize they are both training for the same marathon. They begin to argue before making out.

The ladies decide to start skipping meals and eat some junk food they have in their bags. They decide to sleep in shifts. Sylvie finds Matthew to tell him about the girl they save this morning. She is doing well and should recover. They get a call. House 20 makes it to the scene first so they all listen to Drake. It’s a large fire at a drying cleaning facility. The flames are large and out of control as most of the building is engulfed.

Inside, Kelly and Cruz find a shelf of chemicals while the others look for people in the building. They find several individuals. One woman cannot find her brother in the building. Stella brings someone out. Chief tells her she has to stand down. They are pulling out. They radio to all of them. Drake radios that they are boxed in and can’t get out. Something explodes. Matthew radios out to the chief. He can see two firefighters down. Help is on the way, he tells them. Kelly breaks down the wall leading into an office from the outside. They all get out.

Back at 20, Drake shakes hands with Matt for saving him. The chief addresses what he learned from Mike today at the seminar and shows them how to protect themselves after the fire. They all clean and scrub up together.

Chris is told by his wife that they have bed bugs after she brought a chair home she bought. He brought it to 51. Stella laughs.

At the marathon, the chief invites Mike to show him how they are all raising awareness for the cause. Gallo runs with tanks on his back while Stella jogs alongside. They all chant for one another.