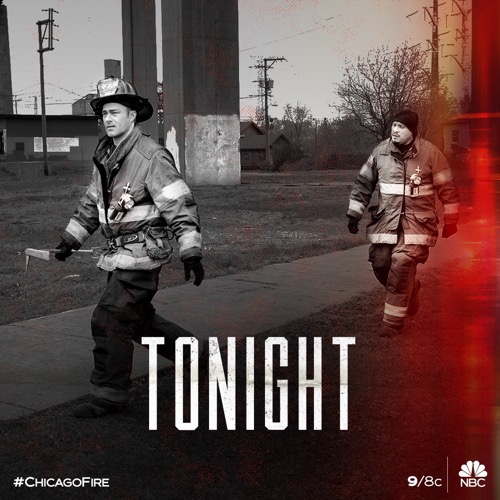 Tonight on NBC Chicago Fire returns with an all-new Wednesday, January 22, 2020, season 8 episode 12 called, “Then Nick Porter Happened,” and we have your Chicago Fire recap below. On tonight’s Chicago Fire season 8 episode 12 as per the NBC synopsis, “A series of false alarms at a private school hinders the firehouse’s ability to respond to legitimate emergency calls. Kidd asks for ideas to surprise Severide on his birthday. Cruz and Brett rent out their extra room, but the new tenant is more than they bargained for.”

Tonight’s Chicago Fire season 8 episode 12 looks like it is going to be great and you won’t want to miss it.   While you’re waiting for our recap make sure to check out all our Chicago Fire recaps, news, spoilers & more, right here!

The crew shows up at a school to discover it was a false call. No-one there needed anything and didn’t pull the alarm. Confused, they take there next call heading to a residence where an oil tank has fallen on a father. He isn’t breathing. They try to lift it but its too heavy. They work to break a window so they can bring in a ladder to get leverage. They free the man and rush him to get medical care.

Later, Sylvie updates the team that the man is still critical after rupturing his spleen and going without oxygen for so long.

Matt and Kelly head back to the school to talk to the principle. After checking, this was the third time someone pulled an alarm at the school. Because of the alarm, a man was critically injured. They ask about looking into the matter. The principal tells them he will take care of it. He won’t however, give any names of the students. They are entitled to their privacy. Kelly is upset. Pulling a false alarm is a felony.

Back at the station, the guys tell Trudy who becomes angry. She will charge whoever the punk is with a felony. They don’t want to go that far, yet.

The next day, the team stands outside of the school and hands out flyers to bring awareness about pulling false alarms. Later, the gang heads to Molly’s to have a drink. Matt thinks they need to help the man and his family who are critical.

Kelly and Ryan head back to the man’s house. His wife tells them he isn’t doing well. She starts to cry after they offer to fix the window they broke. Kelly hugs her.

An old friend Nick is staying with Joe and Sylvie. He is in the middle of a divorce and is heartbroken even if he won’t come out and say it. In the morning, they find him drinking whiskey and looking at old photos.

Matt and Kelly walk to work in the morning when they see a student from the school that should be in school. Later, the same kid is seen with an envelope outside of the firehouse. He drops the envelope and walks away. Kelly yells to him. When he runs, Kelly chases him down. The boy brought a list of names of potential kids who may have pulled the alarm.

Joe and Sylvie tell Mouch about Nick and how he misses his wife. Plus they need him out. He is driving them crazy. They call Nick’s wife and asks her to give Nick another shot – he misses her.

Kelly overhears Stella talking about a surprise birthday trip for him. He was wondering why she has been so distant. The alarm rings. It is school. They head there. They tell the principle they aren’t leaving until they find out what is going on. They search for the gym and then the bathroom. They find a little boy hiding in the corner. They bring him to the principal’s office. His dad comes in. The little boy shares that he is new and is being bullied. He pulled the alarms so that the school would get in trouble and then he could go back to his old school. He apologizes for pulling the alarm.

Nick is moving out to go home to his wife. Joe and Sylvie are thrilled. Nick leaves behind his Nascar DVD as a thank-you. Their new roommate arrives.

The little boy goes to the hospital to cheer up the critical man who was injured by the oil tank. The man is awake and smiles when he is given a card. Kelly smiles too. He heads home to find a cake with a candle from Stella as an early birthday present. All she wants to do is get cozy on the couch. He asks her to move in. She says yes.