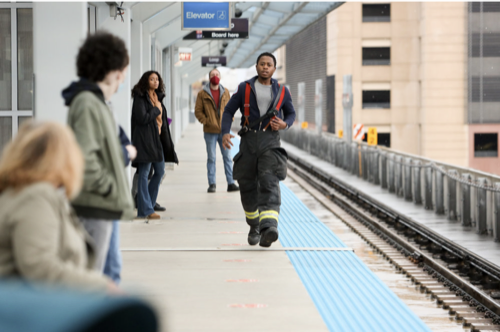 Tonight on NBC Chicago Fire returns with an all-new Wednesday, November 18, 2020, season 9 episode 2 called, “That Kind Of Heat,” and we have your Chicago Fire recap below. On tonight’s Chicago Fire season 9 episode 2 as per the NBC synopsis, “Brett and Mackey find their lives in peril. Casey and Brett tread in unfamiliar territory. Severide chases a memory while Kidd adeptly solves a firehouse problem. Ritter puts himself in harm’s way during a harrowing call.”

Tonight’s Chicago Fire season 9 episode 1 looks like it is going to be great and you won’t want to miss it.   While you’re waiting for our recap make sure to check out all our Chicago Fire recaps, news, spoilers & more, right here!

There was an accident. Brett and Mackey were involved in an accident. They were driven off a bridge and they crashed onto a lower plateau. However, they weren’t alone in going off the bridge. The crazy and homicidal man who drove them off the road had also crashed as well. He was so set on harming the women that he inadvertently came to hurt himself as well and now he was in need of assistance. He was also fortunate that Brett is such a kind and warm-hearted woman because she chose to help him. Brett made it out of the crashed ambulance and, when she saw the other crashed vehicle, she ran over to help the man that was just trying to kill her. Brett even convinced Mackey to help her save this man.

The two women saved their assailant. He was later wrapped up and he was taken to Chicago Med. The women were asked if they wanted to go too, but they declined. They chose to go back to work and so they headed back to the fire station. Cruz was worried when he saw Mackey. He didn’t like the bandage he saw on her head and so Gallo spoke up for her. He said he checked her. He thought she was fine and Cruz didn’t want to hear it from him. He was that worried. Cruz wanted Mackey to go to the hospital and she kept telling him no. She didn’t think she needed to see a doctor. She also wanted to be seen as strong like her new mentor Brett. Brett hadn’t been fazed by the accident at all and she just went straight into EMT mode with their assailant.

Brett even went running to his aide in spite of knowing that he had a gun. Luckily for her, he lost his gun in the drive over the bridge and so he was no longer a danger to anyone. Brett didn’t have to worry about him. She did her job and she was ready to move on. The only thing that seemed to give her pause was how fast Casey got there. She had barely reported they were in a wreck when suddenly she saw him and at first, he was the only person she saw. She didn’t realize anyone else was there until much later on. Brett was so happy to see Casey that she might have let slip her feelings to him. She cares about him. She doesn’t want him to know that because she doesn’t think she should go there with him and so now she’s feeling bad.

Brett talked to Kidd about it. She said she let slip the words “it’s always been you” and that she regrets them. Kidd however didn’t see a problem. Kidd thought Brett should tell Casey how she feels and that it would be great if the two of them got together. Only Brett disagrees. She was awkward around Casey now and other people were beginning to notice. Hermann and Mouch spotted it. They also spotted the new kid helping Boden with the paperwork and they ragged on him. They told him to start pretending not to know how to do things. This was apparently the only way to get out of doing things in the future and it’s something the older guys perfected. Hermann pretends not to know how to make fruity cocktails because it gets him out of serving them.

It’s just the younger generation at the fire station weren’t as lazy as either Hermann or Mouch. Gallo went on the phone and he fought for hours to find out where their ambulance had been towed to. The only answer he got was that Deputy Chief Walker knows where the ambulance is. Gallo passed on the information to Severide and Severide said he’ll handle it. Severide was off tracking down the ambulance when Kidd was finding out what happened to a girl from her program. She has a program called Girls on Fire. It was supposed to be about empowering girls and hopefully getting them interested in becoming a firefighter one day. Stella owes the success of her program to one teenager who talked her friends into coming. And now that teenager is no longer showing up because she had to get a job to help support her family.

Some families were struggling even before Covid-19. Their lives became significantly worse after the disease spread around the world and so the girl is working a part-time job just to help her family. She couldn’t afford to keep coming to the program. Kidd tried to understand. She felt bad for this young woman’s situation and at the same time what else can she do? Kidd returned to work at Molly’s. She was swamped with orders and Hermann wasn’t helping because again he pretended he didn’t know to make the fancy cocktails. Everyone knew he was lying. Even a blind man could tell he was lying and there was nothing they could do about it. The guys at the bar were giving him the stink eye when Brett showed up.

She joined the others and Casey at an outside table. She asked what she missed and it turns out Gallo was telling everyone at the table what happened at the accident site. He said that Casey was so worried about Brett that he jumped out of the fire truck while it was still moving just to run down the hill. Gallo said that Casey moved like he was possessed. His words got to Brett and she fled the table once she realized that Casey might have feelings for her as well. Casey and Brett didn’t speak to each other again until Severide returned to the firehouse with their old ambulance. It turns out finding the ambulance had been important to him because it still had Leslie Shay’s name on it. She was a former EMT who was killed.

Severide had thought it a little sad that with all the fresh blood at the station that not many people knew about Shay. But he remembers. He remembers and so does Casey. They were together when Severide cleaned up the ambulance so that memorial with Shay’s name can be seen again.

Kidd got an idea and she cleared with Boden before she approached the young woman. It turns out she was going to offer this young woman a job at the fire station which would also give her time to be a part of Girl On Fire. And so of course the young woman said yes.

Mackey had needed some time to herself to seriously question whether or not she has what it takes to keep working at the firehouse. She soon realizes that she does have this quality and so she wasn’t leaving. She returned to work and she was there when Severide mentioned Shay. She was a part of the fresh blood and so finding out about Shay had been a good story to hear. Ritter fresh blood as well. He pulled off a daring rescue with a woman who fell on the train tracks and he also convinced Mouch to start helping Boden with the paperwork.

And while the both of them hadn’t planned it, Casey went over to Brett’s place. He wanted to talk and they started kissing. It would have progressed into something more but first Brett had a question to ask. She asked him if Gabby came back would he leave with her. He wasn’t sure and that was enough for Brett. She didn’t want to come in second to anyone with a guy. She and Casey also couldn’t pursue things if he still has feelings for someone else and so their “relationship” was over before it ever began.