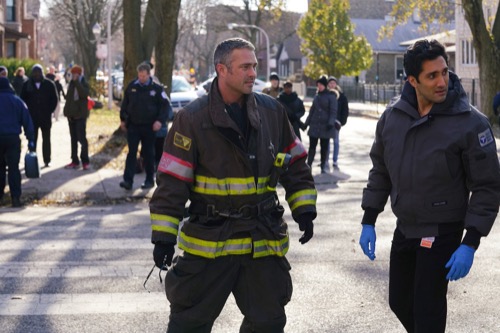 Tonight on NBC their medical drama Chicago Med airs with an all-new Wednesday, January 22, 2020, episode and we have your Chicago Med recap below. In tonight’s Chicago Med season 5 episode 12 called, “Leave The Choice To Solomon,” as per the NBC synopsis, “The team deals with the aftermath of a school bus crash. Dr. Charles worries Dr. Halstead is putting his medical license in jeopardy. Maggie helps a friend in need.”

Halstead went ahead with an unsanctioned Safe Injection Site. He and buddy rented some space and they created a safe place for addicts to get high. It sounds a little out there, but this was a way for them to reach out to addicts and prevent deaths caused by overdoses. Halstead eve prevented his first death when he saved a young woman’s life. Val was overdosing and she was given key medication to stop the overdose in its tracks. Val was alive today because of this unsanctioned site. Her case also showed Halstead that he was doing good work and so he isn’t going to stop until he forced to.

Elsewhere in Chicago, there was an accident involving a school bus. The kids were all facing injuries part and the worst-case belonged to two children whose lives were in danger. The children were held together by the rebar. The rebar had pierced both children and it would be difficult to remove it without further endangering one child. The best way forward then was to remove both children at the same time. This was the only way to not move the rebar and the doctors could see more of what’s going on with an unobstructed view.

Dr. Marcel and Dr. Manning were overseeing the children. They were going to be moving them to the hospital and one would think it would be all hands on deck, but April made sure she wasn’t on their team. She didn’t want to be around Marcel. They shared a kiss and she was feeling guilty because she was engaged to someone else. April also admitted to Maggie that she still thinks about Marcel. It was more than just attraction now and it could potentially ruin her relationship with Dr. Choi.

April was so scared of her own feelings that she was ignoring Marcel as best as she can. She managed to switch off from his service and a new nurse to help with the children. The same children, by the way, who should have remained the focus. Henry and Kate were scared and they kept asking questions because they thought the adults had all the answers. The kids were slowly separated when they got the hospital. Henry was taken off the rebar and that gave the doctors the chance to focus on Kate.

Kate had passed out not long after making it to the hospital. She was sent directly to the OR to see if they could stop the bleeding in her belly with surgery and Henry was taken to radiology. Their parents were all out in the OR and they were slowly being given status reports. Which often didn’t feel like it was enough. The parents of all the children were panicking and one set of parents was even hiding information from the doctors. Dr. Choi was treating a young girl named Alice. Alice had broken some ribs and she was having problems with her breathing.

Her parents waited just long enough to mention that they had caught her smoking. They said they took it away from her and that she hasn’t smoked since, but something like that should have been the first thing they tell the doctor. Dr. Choi thought the parents were irresponsible for not mentioning it and he told April that he would never do that with their daughter. This was yet another sign that Choi wouldn’t tolerate secrets. April should have taken the moment to tell the truth and still she let the opportunity slide.

April’s failure to confront her own issues wasn’t new. She’s been doing this for a while and often a big bust-up does follow. Usually, when she’s with Choi. They’ve had a rocky relationship and it’s amazing they made it so far. This could be why April was attractive to Marcel. He was, in fact, new and they didn’t have any accumulated baggage to weigh the relationship down. Marcel was also a good guy. He moved the kids together because he didn’t want either to die and sure he got flak for that from Henry’s parents. And he let their complaints cause doubt.

But Marcel still did the best for his patient. He saved both Kate’s and Henry’s lives and he won the respect of his fellow doctor which couldn’t be said of Dr. Halstead. Halstead has taken his mission to save addicts to a whole new level. He’s been letting it get personal and its led to him breaking the rules. Halstead brought in a patient who needed a heart valve. It would have been the patient’s third because he lost the other two to drug use and so his cardiologist didn’t want to put into a heart valve. Not when he believed it would be a waste of time. And so he demanded the patient receive a psych evaluation.

Dr. Charles spoke to Mike. He could see that Mike didn’t get care about getting clean and so he couldn’t clear the man for surgery. Charles made the best decision as a doctor. Halstead, on the other hand, couldn’t see that because he was so afraid of losing another patient to drugs. Halstead gave his patient some antidepressant and he claimed that Charles had given the patient that drug. It was his way of saying Mike was ready to face his problems and so the cardiologist okayed the surgery.

Charles later found out what happened. He confronted Halstead and he accused him of being emotional. He said Halstead has lost sight of his duty as a doctor. It didn’t make sense to give Mike another surgery when he was just going to do the same thing all over again. He was going to go back to drugs and he was going to wear out another heart valve. Charles could see that so why couldn’t Halstead? Halstead ignored the evidence before him because that wasn’t what he wanted to see and he realized his mistake afterward. Halstead had been at the hospital when Mike’s girlfriend tried to pass him some drugs and so Mike truly didn’t care about getting clean.

Halstead almost quit his side job when he found out what happened. Then he had run into Val again and she looked better. She said she was going to try to put her life back together. She was a rare success story and Halstead was running with it because he wanted to believe he was doing some good.

Choi meanwhile found out his patient Alice was vaping. It was the vaping that had ruined her lungs and the condition was so new that there was no telling if she would survive her illness. Vaping is just as bad as smoking. Her parents realized that too late and now there’s no telling if they’ll ever get their daughter back.

Maggie had a good day, though. She ended up losing a patient and yet at the same time she arranged for a large group of people to donate bone marrow. And so she saved more lives than she lost.