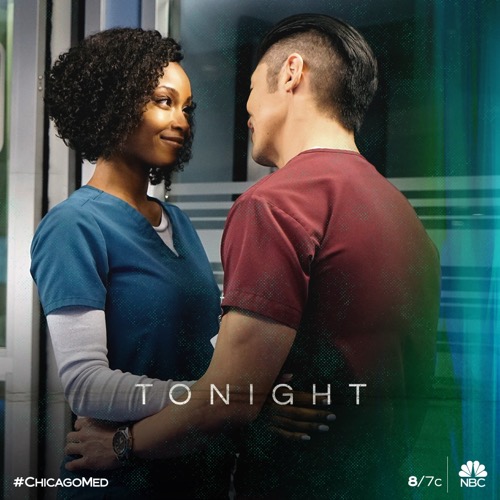 Tonight on NBC their medical drama Chicago Med airs with an all-new Wednesday, February 12, 2020, episode and we have your Chicago Med recap below. In tonight’s Chicago Med season 5 episode 14 called, “It May Not Be Forever,” as per the NBC synopsis, “Dr. Manning and Dr. Marcel disagree over an abusive husband. Dr. Halstead struggles with ethics and his decision to work at the safe injection site. Dr. Charles and Elsa reveal a misdiagnosis that may change a family’s life.”

Dr. Hannah Asher is a drug addict. She went to the safe injection site to get high and she had been hoping to hide her condition from everyone else. She didn’t account for Dr. Halstead. Halstead works at the same hospital as she does and he works at the injection site. He recognized Asher from where he saw her before. He later tried to get Asher to not operate while she was under the influence and she ignored him. She didn’t think she had a problem. She was handling her condition just fine and so she threatened Halstead. She told him if he ever told anyone about her condition that she would say that he was running an illegal injection site. Which he was!

Halstead couldn’t report her with what she has on him. He then tried another method of trying to get her clean and that didn’t work out either. Halstead told her about rehab. He even mentioned that there was a NA meeting near the hospital and she never showed. She skipped out on it. Asher didn’t want to be bothered and she wasn’t going to let Halstead hound her. She said she wasn’t going to go to the injection site if he was going to keep bothering her. Asher would rather risk her life than admit she has a problem and so Halstead wasn’t going to get anywhere with her. And its about time he stops trying.

Elsewhere in the hospital, Manning and Marcel were treating a married couple. Kim and Rick Tyler were in a car accident. Manning was treating Kim while Marcel was treating Rick and Manning spotted something. She spotted some old bruises on Kim. Kim has welts on her back that has bruised over and she was quick to come with excuses for them. She first tried to claim they were from the car accident. She later tried to claim that they happened when she fell down the stairs and so wouldn’t she knew where the bruises came from the first time. And it was therefore only reasonable that Manning suspected Kim has been abused.

Manning suspected Rick Tyler had been hurting his wife. It made her concern for her patient and she became concerned for Rick as well when it came time for Kim to make decisions for him. Kim as his next of kin was asked about a risky surgery. Kim wanted to wait before she signed off on anything permanent even if it would hurt her husband and so Manny spoke up. She didn’t believe Kim should be making the medical decisions for her abuser. She went to Goodwin and Goodwin heard both sides of the issues. She listened to Manning who was firm about Kim being left out of this. And she listened to Marcel.

Marcel didn’t think Kim’s rights should be removed just because she was an abuse victim. He firmly believed that the next of kin held inalienable rights and so he wanted Kim to make the decision. Goodwin however couldn’t be the deciding vote. She chose to put together an ethics review and it was going to be up to the panel to decide. Until then, Goodwin told Marcel to stabilize Mr. Tyler as best as he could. Marcel did so and he needn’t feel bad about how he felt because he wasn’t the only one that made a controversial decision. Student Doctor Curry did the same when she called in Dr. Charles for a brain-dead patient.

The patient was labelled brain-dead because they showed all the signs of it. Only no one ever tested for catatonia and Charles did. He believed the patient who was a ten year old boy was just fine. Xavier fell off his bike and his head. The original doctors on the case thought the hit to the head was why he wasn’t waking up, but Charles believed something in his life made him catatonic and so he asked Xavier’s parents. He talked them about anything Xavier could have been worried about. He learned that Xavier’s stepfather was a cop and that could have been frightening to the little boy. The parents deny that was the case.

Curry went behind the back to look into the stepfather. She found out that the stepfather was an excellent cop and that he could took out a gang almost single-handedly. He had to move away from his family for a short time. He came back home when everything was settled and that a week before Xavier became catatonic. The parents didn’t want to believe there was a connection. The wife most of all because she said her husband was the best thing in their lives and so Charles later spoke to the husband alone. He spoke to him and he told him that his job was an issue. Charles thinks that Xavier will be better with therapy.

But first he needs to wake up. Charles and Curry did what the could to make everything better and over with Marcel – his side lost. The decision was taken out of Kim’s hands. The ethical board agreed to get Rick the surgery he needed and he came out of without a leg. Kim knew he would blame her for what happened. She freaked out and both Manning and Goodwin had promised they could help. They told her they could get her a place at a safe house. Kim heard them and at the same time she didn’t. She was just so scared of her husband that she later turned off ventilator and it killed him.

Kim was arrested and Xavier woke up.

Only Halstead decided to walk away from a safe injection site. He couldn’t let Asher take down the site to get even with him and so he walked away. He believed the site would better off without him there. He also got Asher to meet with him. He told her he quite the injection site and he calmly talked to her about her options. Halstead wanted to help any way that he could. He was so there for her that Asher promised to turn herself in, but not before she asked him to come over to her place.

And while it doesn’t seem like romance, it wasn’t like Choi and April. The two of them worked on a newlywed who turned out to be allergic to her husband’s sperm and that reminded them that they haven’t had date night in a while.