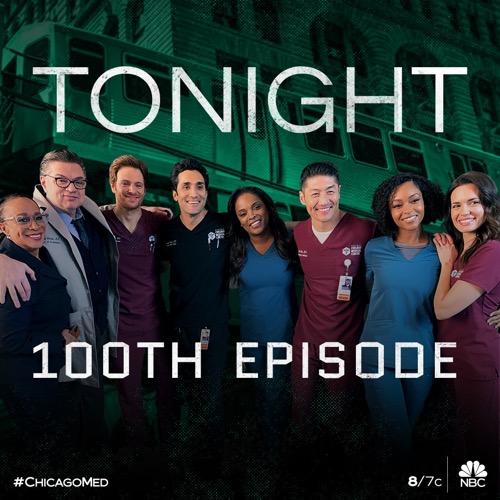 Tonight on NBC their medical drama Chicago Med airs with an all-new Wednesday, March 17, 2020, episode and we have your Chicago Med recap below. In tonight’s Chicago Med season 5 episode 17 called, “The Ghost Of The Past,” as per the NBC synopsis, “Marking the series milestone 100th episode, Dr. Manning and Dr. Charles assist in a complicated case helping a 4-year old who they quickly learn is no stranger to the ED.

Dr. Marcel and Dr. Choi tend to a police officer with a mysterious gunshot wound to the abdomen. Relationships are put to the test as secrets are revealed.”

All anyone can talk about is Maggie’s wedding. Maggie is a beloved figure at the hospital. She’s also been through a lot this year and so everyone was rooting for her. Maggie herself was planning everything down to the last detail. She chose Manning as a Maid of Honor and she hasn’t let Manning chosen a thing. Maggie is handling it all by herself. She even pushed her fiancé’s ideas away and so she has gotten a little bit nutty about it. Her fiancé has tried to say something. Manning has tried to say something and they couldn’t figure out a way to break through to Maggie. And so Manning had to hope for the best.
The doctor later caught a case that took up her time. Manning was treating Mindi Remus whose mother brought her in and unfortunately, her mother has been flagged in the system. Carol Remus is accused of abusing her daughter. She has taken Mindi to several hospitals in Chicago and they have flagged her as a possible Munchausen by proxy case. The doctors all believe that Carol is faking Mindi’s symptoms because she wants the attention of having a sick daughter. Manning had at first spoke up in Carol’s defense because she had met the woman and she hadn’t seen any signs of Carol demanding attention.
Only none of Carol’s complaints about her daughter have panned out. She said Mindi may have had a seizure and the doctors found no sign of it. They also didn’t spot a fever or anything wrong with Mindi. Manning slowly began to consider the possibility that maybe Carol is the sick one and so she turned to Dr. Charles. Charles had a lot on his plate. His thirteen-year-old was suspended from school and she was caught vaping by her mother. Charles agreed to take her for the day so that her mother could go to work, but that meant his daughter is working out of his office all day. She was doing her homework in there and he didn’t want to disturb her.
Charles ran in real fast because he wanted to grab something. He then found out his daughter finished her homework and that she went through his desk. She found a bottle of alcohol. She accused of being a hypocrite for lecturing her on vaping and so they got into an argument about it. Charles reminded her that he’s an adult over the drinking age. He also said the bottle had been a gift and he wasn’t in the mood to be lectured. Charles went back to his patient and elsewhere in the hospital, April collapsed. She collapsed because she had severe abdominal pain. She was rushed to a bed and Halstead was treating her.
He asked her if she’s been doing anything differently. She told him she’s doing IVF and so he believed it to be a gynecological problem. He asked a nurse for Dr. Hannah Asher. The nurse had hesitated because she’s heard the rumors and no one wanted to risk their friend just because Halstead had something to prove. Halstead had turned Asher in for drug abuse. He made sure the hospital was fully aware of her problem and that forced her to seek treatment. Asher hasn’t talked to him since. She was still angry that everyone found out and when she came to treat April – she knew everyone was watching her every move.

April’s boyfriend Choi didn’t even want her treating April. He had wanted to stay in the room to make sure that everything she was doing was proper and Halstead had to talk him out of it. Halstead let Asher treat April. April’s situation stabilizes and she wasn’t in pain anymore. Choi got to speak with her. He didn’t have that much time with her because he was working a case with Marcel and he needed back to it, but he made sure April before he left and it was only when she was sure she was okay that he returned to his case. He and Marcel had treated a police officer that was shot in the line of duty. The officer had also shown signs of being shot before then and no one knew about it.

It wasn’t in his official file. His partner didn’t know about it and the officer himself denied ever being shot. The hospital and the doctor still needed to report because it was a gunshot wound. They even found evidence that it wasn’t treated properly at a hospital. So, they had to report it and Charles had to report his case as well. He decided the best way to prove if it was Carol’s fault that her daughter is sick was to take Mindi off of oxygen. She has her own tank at home and she uses it every day. Her mother swore she needed it or she’d get sick. The doctors decided to test that theory and so they took Mindi off the oxygen. And she was fine.

She was better than fine. She was normal. She didn’t need the oxygen and so it was her mother that was making her sick. Charles and Manning confronted later Carol. They told her their suspicions and she had freaked out. She had grabbed her daughter. She began shouting at the doctors that they couldn’t take her daughter away and that’s when Charles’s daughter Anna came across them. Anna begged her dad not to take Carol’s daughter away. He tried to tell her that Carol wasn’t being a very good mother and so Anna asked if they were going to be separated because Charles hasn’t been a very good dad.

Charles hasn’t been the same since his wife died. He apologized to his daughter for pushing her to the side and he said he would do better. He also realized he didn’t need to report Carol. She wasn’t intentionally hurting her daughter for her attention. Carol has just been in survival mode. She nearly lost her daughter who was born at twenty-four weeks and she hasn’t stopped panicking. She doesn’t even sleep anymore because she’s that worried about her daughter. Carol needed professional help. There was no doubt about that because she was suffering from PTSD and so Charles was going to do his best to help her so that she wouldn’t have to lose her child.

This also freed up Manning. Manning was finally called when all of Maggie’s plans fell through and her fiancé got to realize she was being so controlling because she was acting like she was in remission. She was so scared of not having control that she took it too far in the other direction. Maggie was now leaning on the people she can and that’s what’s going to save her wedding. Choi and April were supposed to go the wedding together and they didn’t. April felt so bad about having Choi at her side that she told him everything. She told him that she kissed Marcel and that it had been all her.

He didn’t believe her. Not at first anyway. He thought it was Marcel’s fault and he confronted him in the hospital. Luckily, police officers were nearby. They were waiting to hear about one of their own and they weren’t going to let the doctors fight. The cops pulled the two men apart. They also learned to be professional again when they spoke to their patient and this time he admitted that he had been shot before. He had held up a store with a friend and the store owner had fired at them. The store owner killed his friend and shot him. And so their heroic police officer had once taken part in a crime.

Choi left it to the officer to come clean. He just didn’t go to the wedding. He realized he had been so focused on having a baby that he ignored problems with April and so he sat the wedding out. She went alone and she ran into everyone else who was happing about Maggie and Ben. Halstead even showed with Asher as his date. Asher finally saw his side of things and she was willing to give him a second chance.

And Charles went to the wedding with his daughter as his date.