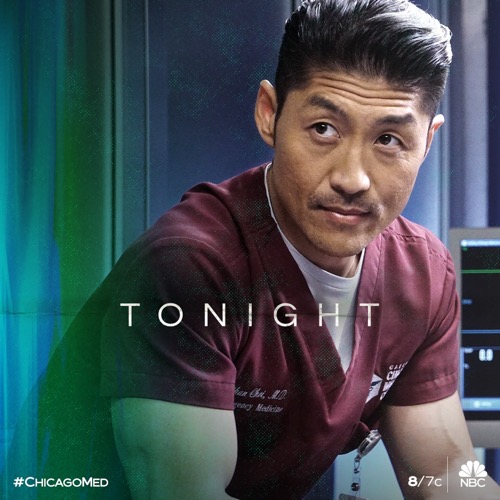 Tonight on NBC their medical drama Chicago Med airs with an all-new Wednesday, March 25, 2020, episode and we have your Chicago Med recap below. In tonight’s Chicago Med season 5 episode 18 called, “In The Name Of Love,” as per the NBC synopsis, “Dr. Charles and Goodwin fear Dr. Halstead is repeating his past mistakes when a patient with early-onset Alzheimer’s is brought into the E.D. Maggie and Ben become concerned when one of Ben’s students is admitted. Dr. Manning and Dr. Marcel treat a terminally ill patient and disagree over the best course of action.”

Halstead was warned. He was warned by Dr. Charles that Dr. Asher was still in early recovery and as part of the rules of early recovery, she wasn’t allowed to be in a relationship. The high she gets from drugs was too similar to the high she would get from romance. Asher needed to heal before she could go there with him and so Halstead had to stop at being friends. They couldn’t be anything more than that. Halstead had hoped they would be and Charles told him “no”. Charles has over thirty years of experience dealing with recovering addicts. He told Halstead there was no cheat code or exception to the dating rule and so Halstead either has to be happy being her friend or he couldn’t be a part of her life.

Halstead also had a new patient. He was treating Evelyn Myers who was suffering from early-onset Alzheimer’s. She had an accident at home with her daughter and she was brought in showing signs of kidney failure. She could die because of this kidney issue. Halstead wanted to treat it and he couldn’t because Evelyn had signed an advance directive. She signed back when she was still herself and it said she didn’t want to receive any medical help that would prolong her life. Evelyn signed this document. She also told her husband Elliott what she wanted and so it didn’t matter that she was now saying she wanted treatment.

She doesn’t know where she is. She doesn’t understand what the treatment would mean nor was she in the mental capacity to make decisions for herself. Evelyn made her will known when she signed the directive. Halstead as her doctor had to follow that directive and so there was no reason why he should be fighting it. He thought Evelyn should be allowed to change her mind despite her illness. He brought in Dr. Charles and Charles didn’t agree with him. He assessed Evelyn. She wasn’t in the right mind to offer any input and so she couldn’t be in charge of her own health. Her advance directive is what counts.

Charles tried to tell Halstead. Halstead refused to listen to him. He said Evelyn wasn’t depressed or suicidal and that showed she wanted to live. Halstead even wanted to convene an ethics committee. He wanted someone to agree with him that Evelyn and Charles turned him down. He thought his input as a psychiatrist was enough. He also told Halstead that just because he wishes he was wrong doesn’t make so. Charles believed the directive stood and he wasn’t going to side with Halstead against Evelyn’s own wishes. Halstead didn’t like that. He later waited for Evelyn to change her own mind and he followed her wishes to save her life in spite knowing she wasn’t in a position to make decisions for herself.

Halstead later got in trouble with Evelyn’s husband Elliott. Elliott had wanted to follow his wife’s advance directive and he was getting pushed back from their daughter. Their daughter was in town for Spring Break. She hasn’t been around long enough to see Evelyn as she is now and so she didn’t get it. She just wanted her mother alive and with her at all costs. She didn’t understand why Halstead got in trouble. He was pulled in front of Goodwin and Goodwin was angry with him. She asked him if getting sued hadn’t woken him up yet. Halstead keeps making the same mistakes and expecting different results. And Goodwin was tired of cleaning up after him.

Goodwin had her own issues to deal with. She was dating her ex-husband Bert and he went behind her back to tell their son that they were seeing each other. They had never defined the relationship. They were just seeing others when they could and so Goodwin didn’t think that was enough for him to tell their son. Their son Michael had been upset when he heard. He didn’t want them back together. He blamed his father for the divorce and he thought Bert had moved from the divorce way too fast for anyone to be comfortable with. He later spoke to his mother. He asked her if it was true she was dating Bert again and she lied to him. She said she wasn’t dating Bert.

Things between the exes have been going great. They’ve been taking it slow and they both seemed to be happy with where they are. Bert shouldn’t have told Michael behind back. Goodwin also shouldn’t have lied to Michael about the relationship. She was going to live with that lie now and so she couldn’t exactly judge Halstead. Halstead had had support from the daughter Molly. Molly had considered suing her father to keep her mother alive and so she wasn’t ready for her mom to die. Molly had needed someone to talk to. Goodwin came around and she talked Molly into seeing things from her mother’s side.

Her mother’s final wish had to be to die on her own terms. Goodwin reminded Molly of that and so Molly agreed to take her mom off the tube. Her mother was going to die. She was going to do it on her original terms and both Molly and Halstead made peace with it. Halstead even apologized to Charles. He didn’t mean to dismiss what Charles told him. He just got carried away and so Charles understood. Charles sees it all the time at the hospital. Doctors put blinders on when they treat patients and Halstead wasn’t the only guilty one. Dr. Marcel had also made a mistake. He promised a man who was dying that he could buy him more time with an experimental surgery and Manning had tried to talk him out of it.

Manning didn’t think they should be taking a risk with what little time Nick Elms had left. He was dying and he was expecting a baby. He could live long enough to see his child. Manning tried to tell Marcel that they shouldn’t be trying anything experimental and he ignored her. He went ahead with a new surgery. His patient later died from complications and so now there’s no going back. Marcel took four months off a man’s life because he had a hunch. He has to live with the fallout of that decision and it probably didn’t help that Manning turned out to be right. And meanwhile, Choi and April talked it out.

They had a patient whose husband was trying to stop her from losing weight. He would pour protein into her fat-free shakes and that triggered an underlying condition. Choi and April treated her. They found out what the husband was doing and made sure she was informed. Their patient didn’t want to press charges against her husband. She was going to forgive them and so that got the couple talking. They finally talked about the kiss. Choi asked April why it took harming herself to get her to the tell the truth and he even asked if she loved Marcel. And she told him “no” because she was still in love with Choi.

Goodwin also made sure to work on her relationship with both Michael and Bert. She invited both men to dinner and she told her son that it wasn’t on all on Bert for the divorce. It takes two to end a relationship. Goodwin is acknowledging where she went wrong and she was telling Michael that she wanted a second chance with his father.

But Halstead kept pushing the boundaries with Asher and it wasn’t going to end well for him.