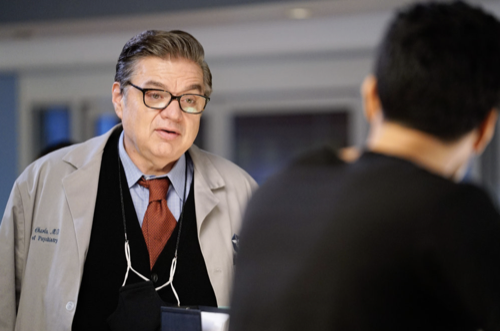 Tonight on NBC their medical drama Chicago Med airs with an all-new Wednesday, November 18, 2020, premiere episode and we have your Chicago Med recap below. In tonight’s Chicago Med season 6 episode 2 called, “Those Things Hidden In Plain Sight,” as per the NBC synopsis, “Goodwin announces a new ED Chief and the choice doesn’t make everyone happy.

Dr. Manning takes a stand for her patient and finds herself dealing with the repercussions. Dr. Charles tends to family affairs.”

Halstead’s new apartment fell through. He had been living with his drug addict girlfriend Hannah for a while because the two thought they were in love and that they could handle anything and everything together, but Hannah relapsed. She was in a drug treatment program. She had gone through the steps and she was told she shouldn’t be dating for the first year. The treatment demands that addicts wait until they’re much further along in the program to date because otherwise they could be using romance to fill the space left by drugs. Hannah was warned about this rule. She chose to ignore it and so did Halstead who also knew about it. They ignored the rule because they thought they could beat the odds.

The now-former couple realizes now that they were wrong. Hannah relapsed and Halstead couldn’t bear to be in the relationship anymore. It was tough being with Hannah. The relationship hadn’t been perfect, to begin with, and so it crumpled the moment Hannah relapsed. She OD one day. Halstead found her and he had her rushed to the hospital, but after he got her checked out and she was okay, Halstead told her he couldn’t do this anymore. He ended things. He was living at her place up to them and so he needed to a new one. He thought he found one. He found a place and then the landlord told him he couldn’t move in because it had bed bugs. Halstead also couldn’t stay at Hannah’s because Hannah let her lease go.

Hannah has decided to leave Chicago. She’s going to start over out west and so she couldn’t help Halstead with his living situation. He was on his own for that one. Halstead also realized he didn’t have a home and that his career was going nowhere. He was feeling quite low when Maggie tried to make him feel better. Maggie told him that there was a chance he could become Chief of the ED. Lanik was leaving the position. He couldn’t take it after the coronavirus broke out and so he was leaving the hospital. Goodwin wasn’t in because she has a preexisting condition. She therefore was telecommunicating. The hospital needed someone to run things on the ground and Maggie got Halstead’s hopes up.

Halstead came to believe that he might be the next Chief. He has nothing else going for him and he was looking forward to having that big office because it would at least provide room to place his stuff. Only the Board didn’t name him as the new Chief. They elected to promote Choi to that position and so now Halstead was feeling jealous on top of everything else. Maggie tried to comfort him again. She told him she was sorry and he told her it was okay. He made it out like he was fine. Like the Board’s decision hadn’t just devastated him. Halstead and Choi were good friends before this and now Halstead couldn’t help wondering how Choi got the position. He wanted to know what Choi has that he doesn’t.

Halstead has seniority. He was at the hospital first and Choi was under him for a time. It, therefore, didn’t even make sense of how Choi was to leapfrog ahead. Choi, on his part, didn’t realize that there was an issue at first. He was happy to accept the position of Chief of the ED and one of the first things he did was to backup April. April got into a dispute with a doctor. They disagreed on treatment and so she verbally twisted the doctor’s arm until he did what she wanted. The doctor wasn’t happy by the end of it. He complained about her to the new Chief and Choi of course protected April. He and April used to be a thing. They were planning a family and they were going to be together until April had a change of a heart.

April cheated on him with someone else. She did it because she wasn’t ready to settle down and so she sabotage the relationship, but Choi still has feelings for her and that’s why he didn’t reprimand her as he should have. April did cross a line with the other doctor. She should have been told to respect the doctor’s position and instead, Choi let her off with no consequences. Choi made a mistake in her case. He favored her and he questioned Halstead. Halstead had a patient that came in after a car accident. This patient was truly injured and there were signs that he was suffering from a hidden injury. Halstead had to want to run a long mile of tests. He was told no by Choi because Choi thought it was something else and later the patient almost flatlined.

Halstead chose to ignore Choi’s opinion on the matter. He treated the patient like how he wanted to treat him and he was right. Halstead was making heatwaves when Choi came around. Choi thought they should hand the patient as well as his case over to surgeons. He wanted to clear up the room in the ED and so once again he butts heads with Halstead. Halstead wanted to keep treating his patient. He felt like he could handle it and he was getting sick of Choi second-guessing. Choi noticed how agitated Halstead was with him. He thought it was because of the job and how he was promoted over Halstead. So, he asked if it was because of the promotion. Halstead claimed it wasn’t the promotion and he said he was angry for another reason.

Halstead said he was angry because he wanted to keep his patient alive. Choi told him that if he wanted that then he had to hand him over to the surgeons and so that’s what Halstead. Not that Halstead liked it. Halstead had been given a chance to work with new doctors and he originally turned down this opportunity because he thought he should stay with Hannah, but she’s gone now and Halstead was really beginning to hate his job. He’s not sure he can continue to work under Choi. Choi later did get tough with April. She tried to flout their Covid-19 protocols for a patient who wanted her mother and so Choi had to tell April that they couldn’t just work around the rules for one patient. Its coronavirus. They had to take it seriously.

April ended up calling Choi a hardass. She wasn’t too happy about him being the new Chief once he wasn’t siding with her and so Choi was upsetting everyone. Choi later found out that Halstead had been right all along about why his patient was sick. Choi apologized to Halstead for it. He said that he couldn’t side with him earlier because he and Goodwin had talked about it and he felt the ED needed stronger management. Halstead told him that was okay, but he also added he didn’t require micromanagement. Not when he knew what he was doing. Halstead wasn’t someone that Choi needed to worry about. It was Manning that Choi should have been paying attention to. Manning was treated a pregnant prisoner and she got attached.

Manning didn’t like how this woman was being treated by the police. She didn’t like how she had to be shackled or that the police weren’t allowing her to see her new baby because they have a rule about no visitors when it was just one officer outside. Manning got so upset that she pushed the officer. She didn’t feel about it and yet she committed the very same crime that the prisoner went to prison for. It was pretty ironic. Manning wasn’t a young black woman protecting her cousin and still, she committed the same crime by pushing an officer. This happened on Choi’s watch. He was Chief for less than a day when a crime was committed by one of his doctors and, not that surprisingly, Manning got off with just a warning.

Manning got to see a prime example of white privilege. She came to feel even worse for her patient than before and she hoped that one-day things wouldn’t have to be like that.

Halstead also spoke with Goodwin about why he was passed over. He was told he was impulsive, that Hannah’s drug addiction came up, and to make everything worse he wasn’t even considered for the job. Halstead was so upset that he contacted Dr. Virani about the job he turned down. It seems he might have changed his mind.

And Dr. Charles found out that his ex-wife was considering taking their daughter to Arizona, but he was going to fight her on that decision and Crockett told him if he ever needs to talk that his door was open.