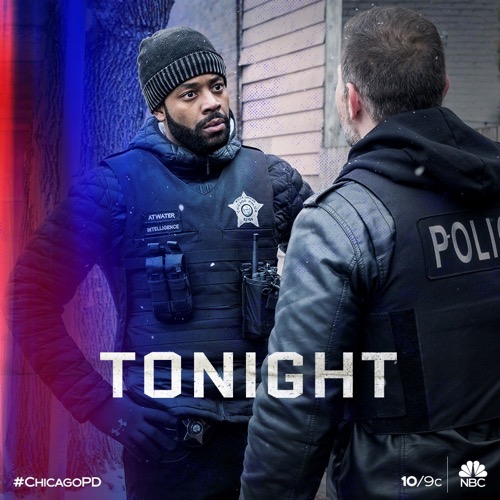 Halstead walks into the station, Voight is there and Ruzek is going to explain a case to them. Three months ago an unlicensed mini Uzi was used by a deranged white male in a black church shooting. Luckily though, nobody was seriously injured. A week ago, the same type of Uzi was used in a drive-by in a G Park lords funeral, 2 dead, the shooter was caught but he lawyered up. The Uzi was stolen from Indiana and transported into town. The target was Tony Reed, a part-time biker, part-time outright agitator. He was in jail for meth before getting into guns. Tony stays in the shadows and relies upon the small guys like Jeffrey Allan Hill aka JHawk261 who posted a charming photo on Instagram of him shooting with an Uzi.

Atwater goes undercover and meets Hill who frisks him and invites him inside a building. Atwater goes inside and sees Tom Doyle, he is either dirty or undercover, Voight tells the team to let it play out. Boyle tells Atwater to, “runaway son.” Atwater tells he will be in his car until he straitens Boyle out.

Atwater rejoins the team, apparently, Tom Doyle is undercover and has been promoted to detective. Voight is going to go talk to his sergeant. It turns out that it was a conflict in paperwork. His sergeant wants to work with Voight’s team, together they can take down Tony Reed.

Both teams meet to discuss the case. Doyle suggests they increase the size of the purse if it is a big enough deal Reed will want to be there. Doyle goes over to Atwater and apologizes for his comments, he says he was undercover and those guys are really racist, he was playing a part. Doyle says he wants to put the past behind them and offers his hand to Atwater, who shakes it.

Looks like Reed is hot and heavy to do the deal with Atwater, Voight tells Doyle starting texting Reed and see if he takes the bait.

Atwater is approaching the entrance to the building with Doyle, they meet Reed. It doesn’t take long for Reed to produce the weapons and for the team to come in and arrest everyone. Afterward, Doyle asks Atwater if he would like to go for a beer, he says no he has to do his paperwork. Doyle says he saved his life, the least he can do is let him buy him a beer. In the car, Doyle tells Atwater being undercover is fun, it is like being an actor. Doyle brings up what happened the year before and says he wants to apologize, he wishes he handled it better.

Atwater gets mad, he says it happened and he doesn’t want to talk about it. At a stoplight, Doyle tells Atwater that a man across the street looks suspicious. Atwater doesn’t think so and asks if is because he is black. Doyle pulls the car over, he asks the guy what is in the bag and shows his badge. The man says he has nothing, Doyle gets upset and goes after him, Atwater tells him to stop and come back. All of a sudden Atwater hears shots fired, he pulls out his gun and heads into the building, he finds Doyle shot. Atwater tells Doyle to fight, focus on him.

Burgess is there, Atwater tells her that Doyle got into a guy with a bag and the only thing in there is a pair of running shoes. Doyle is in surgery. One offender is down, he has no ID. Two black men got away, Doyle didn’t make it, he is dead. Voight says they do whatever they have to do to find these guys.

Atwater tells his story to the IRT. Platt is there, she tells Atwater he is there to give him a ride home. He says he has to go over to Doyle’s father’s house, Platt says that she will go with him. At the house, Atwater goes to pay his condolences to Doyle’s father, who tells him that he has a good Irish name, then he says that he knows he tried to help his boy and he appreciates that, his boy will go out a hero and not that many people go out like that. The John Doe is Sean Page, married and no priors, the bullets that killed Page came from Doyle’s gun.

Ruzek and Atwater go to Page’s house to speak to his wife. Ruzek tells her that they need to find the two men that her husband went to visit because they killed a police officer. She says he was going to drop off a pair of Air Jordans for his cousin’s birthday. She says Sean was not a criminal, he was a good man and a good father, he was not a gang banger. She tells the two to get out and let her family grieve in private, she yells at them, they leave.

Halstead has something, a hit on a blue sedan, it is registered to Jamal Pierce. They head to his place. They stake out the Piece’s house and find him. Voight asks him where he was the night before at 7:00 pm because his car was parked outside where a cop was shot. He says he was at his uncle’s house, it was his birthday. He was there from 6:30 pm to past midnight. Voight asks him who was driving his car, it was his friend Terrance and he is in his basement with another guy.

The team heads into the basement, it doesn’t take long for the too get the two guys.

One of the men in custody and Voight is interrogating him. Terrance, says he shot Doyle because he shot him first, they weren’t doing anything wrong. They were just playing Fortnight and minding their own business. Doyle walked in a said he was going to shoot all their monkey asses, he pulled his gun and started waving it. So Terrance pulled his gun out and all hell broke loose. Terrance says it was self-defense. Voight says they were sitting on a few kilos of dope. Atwater interrupts the interrogation.

Atwater tells Voight there was no probable cause. Doyle saw a black man walking down the street and he started profiling. Page wasn’t doing anything wrong, he was just in a bad neighborhood carrying a duffle bag. Voight says that if what he tells him is true, they have a big problem. Atwater says it is true and it is bad, he can’t just sit on this, he has to say something.

Voight meets with Doyle’s sergeant who says he is starting to hear things, Atwater starting to make a stink about how the shooting went down and it’s a bad idea. If Atwater tries to make this racial with a guy who is loved by so many and has a lot of family in the ranks, there will be repercussions. Voight tells him that Atwater is a son to him and if he goes after Atwater, he goes after him too.

Voight tells Atwater that he telling the truth, the two bangers they caught, they are going to walk. Doyle’s murder becomes a justifiable homicide, and the drugs they seized goes away. He is not here to debate Atwater, he says it is also going to cause a wrongful death suit for Page and a hell of an internal affairs investigation for him. And, the city is going to be sued for millions, and he doesn’t care about any of it, he can handle it. But, what he does care about, is Doyle’s friends and family, he was third-generation police, and he is going after his character, tarnish his legacy, and those people are going to pull ranks, hard and fast. Atwater says he knows. Voight tells him to ask himself how bad does he want to be right.

Atwater goes to see Price in prison and asks him for advice, he tells him he is no Martin Luther King and should keep his mouth shut.

Atwater has his interview, then he sits down with Ruzek and Voight for a drink before heading home, they toast to telling the truth. Once he pulls up in front of his house he notices that there is a stakeout at his house and there are several cop cars, Atwater shouts “I’m right here and going nowhere.”  he cars leave.