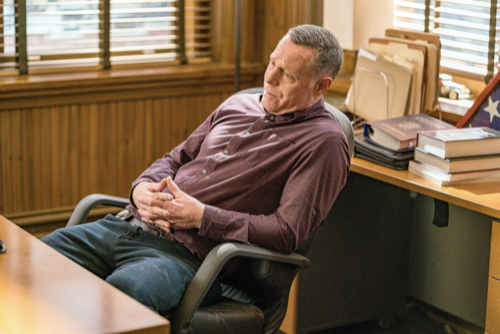 Tonight on NBC their drama Chicago PD returns with an all-new Wednesday, November 11, 2020, season 8 episode 1 premiere called, “Fighting Ghosts,” and we have your Chicago PD recap below. In tonight’s Chicago PD season 8 episode 1 as per the NBC synopsis, “The team responds to the shooting of a 5-year-old girl and they must work the case while facing new obstacles that come from the heightened attention on police reform. Season 8 premiere.”

Atwater is called in regarding the Doyle homicide case to see if there is anything he would like to add or modify, he says no, he stands by his original statement. Atwater says the two men were acting in self-defense, Doyle was to blame. She tells him that it takes a lot of guts to take on the Chicago police department. The case is dropped.

Atwater visits one of the victim’s wife and child, he tells them that he made his statement that Doyle was to blame. When he walks back to his car, he sees a police car and gets paranoid, looks under his car. He is worried, Ruzek tells him that Doyle’s crew plays dirty. It turns out a bag of heroin was planted in Atwater’s car, Ruzek finds it.

Voight gets called into the deputy office, he gets a heads up, if he keeps running his unit the way he is, he will be out of a job by Christmas. He asks if there is anything else, she says that she is on his side. Voight gets a call, he has to go.

The team responds to the shooting of a 5-year-old girl. Voight tells the team to find someone who saw something. One man on the street calls Halstead a racist cop and says he is not welcomed there. Ruzek gets a beer bottle thrown at him and Burgess tells him not to react.

The little girl is in critical condition, but they managed to take out the bullet. Voight talks to Roberto, the little girl’s father, and tells him that they know about his prior arrest. He says he is not a drug dealer or a gang banger. Atwater tells him to put himself back in that moment, was anyone there. He says he heard a car drive away really fast, it was black and it left through the alleyway.

Later, Voight tells Atwater that he knows that he is going through a lot but this whole case has riled up the other officers.

They find footage of the shooting, it happened behind a church in the alleyway. The shooter misses his intended target and hits the girl.

Halstead and Upton head to the church, they find a man tied up. He says he was doing paperwork, a man with a mask showed up and asked for all the money he had in the safe. He gave it to him and when the masked man left he chased him in the alley, but he drove off after shooting at him. Halstead asks how he got shot, he says he called the dealer, the guy who owns the cash, and he did it to him. He gives up the dealer’s name.

Voight goes to visit Carlos, the dealer. Carlos claims to know nothing. Voight goes back to the station, they found a black car, they were able to pull it off from a traffic cam two blocks away. The car belongs to Ann Salgado, she has a record. She has a brother who has a record and a daughter, the father is Carlos.

Voight brings in Ann, she claims to know nothing. Voight tells her a little girl was shot, the same age as her daughter and she is fighting for her life. If  they talk to them, they can keep her out of prison so she can be with her daughter. She tells Voight she is not talking, she wants a lawyer.

Ruzek is with Atwater, he is talking to him about Ana and the five-year-old girl that got shot. Atwater is stressed, about the case he was involved in, Ruzek tells him to go home. Ruzek gets in his car, he is listening to the radio and they are talking about George Floyd when he is pulled over by a cop. Two officers come out, he says he is the police. The cops say he ran a stop sign, he says he didn’t. He gives his name and badge number, the cop tells him to step out of the vehicle. Atwater refuses and shows his badge, when he goes to get it, they both pull guns on him. Then one of the cops says he had an anonymous tip that he was selling drugs. Atwater tells him that he already found it and got rid of it, then he asks him if he really wants to do this.

The next day, Atwater goes to see Voight and tells him what happened. He says a kilo of heroin was planted in his car. Voight tells him that the blue wall is a tricky thing, it is a code, you never really see it – it is like trying to fight a ghost. Atwater says he knows.

Ruzek is with Atwater, they watch the surveillance video. The guy who was driving the car is Miguel, he has sixty-seven drug charges, and he is dating Ana. They get a warrant and go out to get Miguel. They find the money, Miguel left it in the church collection bag.

CPD’s deputy superintendent walks into Voight’s office, she says she just watched the bodycam footage of Miguel’s arrest and he kicked down the door without announcing his office. She spoke to the State’s Attorney’s office and they have determined that the entry is improper so they determined that all the evidence is inadmissible. She says it could have gone wrong a hundred ways and the days of playing God are over, the quicker he understands that the better.

Voight tells the team, he tells them that they did the right thing but nobody has the guts to stand up to the police right now. The only evidence they have is Miguel entering his house with a black bag. Voight goes to see Carlos and shows him all the photos of evidence that he has. Carlos says he didn’t do it. Then he tells him that one of his bullets hit a five-year-old girl and she is fighting for her life right now. Miguel says Chicago is a dangerous place. Voight tells him if he tells the truth, he cut himself a deal, if he waits they are going to nail him. Miguel asks for his lawyer and tells him that he is done talking.

The little girl died, her father goes to tell Voight and asks him if he got the killer. Voight says he knows who did it, he just needs a little more evidence.

Voight is upset, he wants Carlos to put him in the cage. Atwater tells him that he can’t do it, Voight shouts at him and tells him if he wants to be a boy scout he can go find another job. Voight watches as Carlos is released, he sees Voight and smiles at him as he leaves. We then see Voight in his car, he has a gun in his hand, and he is outside Carlos’ house. Carlos is in front, drinking and smiling with some of his friends. Voight starts his car and drives off.

Atwater arrives at home, he hears someone whistle and sees someone standing by a car. All of a sudden he is attacked by about half a dozen men in masks and left on the street.