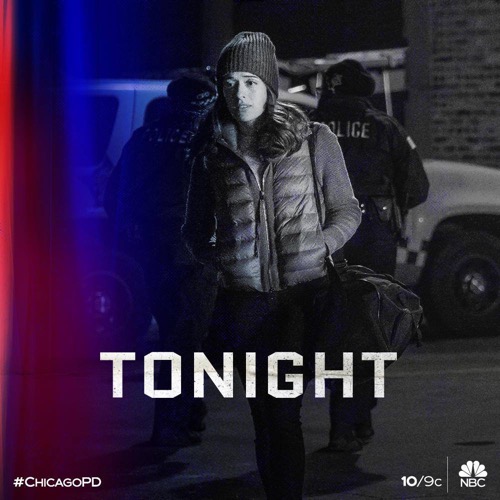 A series of deadly acts of vandalism causes tensions to run high in the insular neighborhood of Canaryville. Atwater tries to reach out to his brother, but only pushes him further away.”

Kevin finally tracks down Jordan after 4 days. Kim meets up with Adam at a restaurant and shows him a sonogram picture of their baby. Adam smiles. He wants to talk at some point about how this is going to work. They hear gunshots and run to a storefront. Inside, the owner is impaired by a table leg. They get him out of there. He reports white males shot up his store after driving into his store, yelled racial slurs and then took off. Kevin and Kim are walking from the scene when she shares she is pregnant. He is a bit surprised.

The team meets up. This has also happened to two other store owners. They get all the info they can and hit the streets. Kim tells Adam she told Kevin. She doesn’t know who else to tell and when but she will figure it out. Another call comes in for males with shotguns in progress at a local store. Adam and Hailey arrive at the scene. The shooter is still there before shooting and running. Adam follows and comes upon him fighting a man on the street. The suspect gets away. Adam goes back to the man who fought the suspect and gets him to sit with a sketch artist. He also IDs a sticker on the getaway car. It belongs to a local bar where his dad goes. Adam and Kevin head there, talking about Kim and how he doesn’t know why to do all of this with Kim.

At the bar, the owner knows Adam well because of his dad. He isn’t happy to see him but after some back and forth they get footage from the owner and ID a person of interest. They head back to the man’s house, Nick, who fought the suspect in the street. They show him a photo but he is obviously afraid to ID the guy.

They bring Nick in and Hank talks to him. He tells Nick he knows what he has done in his past and what can happen for him if he doesn’t cooperate. Nick talks and IDs the suspect. They head to the apartment building where they think he is. Kim comes face to face with one of them. When he won’t put the gun down, Adam shoots him. Kim is upset.

Outside, Kim and Adam report their stories. After, Kim tells him she told him to stay back. She tells him they aren’t together. She is going to do what she wants and how she wants.

Kevin finally talks to Jordan. He is mad at Kevin, he loved her. Jordan hits Kevin before taking off and telling him they are done.

The team works on new leads to their second suspect. They head to his father’s address and find Nick bloody on the floor. Nick tells them he came to warm the father about his kid and the dad beat him with a bat.

The team tracks down the dad to a hockey rink. He has a gun. Hank tries to reason with him. He rambles about how he once had a life but he screwed up. He puts the gun to his head and fires. Hailey bends his arm from behind.

Trudy gives Kim and Mom Cop coffee mug and tells her she isn’t crazy. She heads to tell Hank. He hugs her. Back at her apartment, Adam is waiting. He thinks they should get married. She thinks that is a really bad idea. But they can be family. They are in this together. Adam is happy. He just wants to do the right thing.