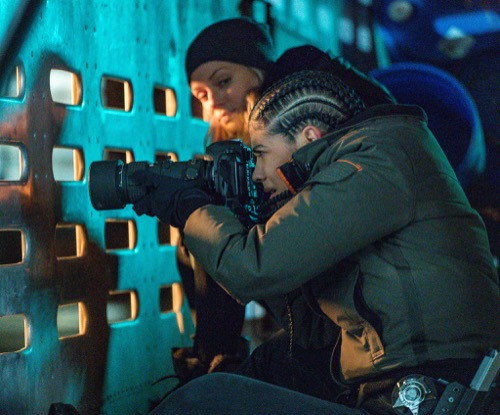 Tonight on NBC their drama Chicago PD returns with an all-new Wednesday, January 22, 2020, season 7 episode 12 called, “The Devil You Know,” and we have your Chicago PD recap below. On tonight’s Chicago PD season 7 episode 12 as per the NBC synopsis, “Voight makes a deal with Darius Walker to help bring down a rogue group of dirty cops dealing drugs that were supposed to be destroyed. Upton clashes with Voight and enacts her own form of justice.”

The detectives were forced to stand down when one of their own recognized their perp as being a cop. The cop was later identified as Kelly Tyler and Uptown recognized him because they went to the academy together. Also, Kelly had asked her out on a date. Uptown remember turning him down and so it was easy to remember him as a person. Tyler is a decorated veteran of Chicago PD. He had no reason for being in the area and there weren’t other sting operations in place. Tyler could only have been there because he was a drug dealer.

Tyler was a drug dealer and a cop. Those two don’t go together for a reason and so Intelligence investigated him. They found out he’s been buying up properties all in cash. He even put a storage locker in his mother’s name and she died several years ago. Therefore, this storage locker was important. Tyler had set up a shell company using the storage locker as its address and there the detectives found several bags of cocaine. Not just any bags of cocaine but ones they identified from a previous drug bust.

Halstead remembered logging in those bags of drugs. They supposedly went to the Drug Vault for Chicago PD and they should have eventually been destroyed. The fact they weren’t indicated that there was a second dirty cop involved. Halstead believed it was Sergeant Jake Gibbs. Gibbs ran the vault. He signed off on them being destroyed and so he must have forged the paperwork if those drugs are still around today. Halstead and the other detectives then put trackers on the car of both of the cops they suspected were dirty.

They followed the men to a meeting they had. They also spotted Darius Walker showing up at that meeting and that’s funny because they could have sworn he was a Criminal Informant for Voight. Voight was surprised at Darius’s involvement. He later pulled that man aside for because he had needed answers. He wanted to know how long Darius has been sitting on dirty cops and it turns out Darius has been working with these officers for years. And if he was going to hand them over to Intelligence then he wanted something for it.

Darius wanted this to be his last case for Voight. He was done with being a CI. Darius bought a strip mall and he wanted to become a developer. In other words, he was going legit. He wanted to be done with that side of his life and so Voight had to clear this potential sting with Crawford. He later explained to Crawford how they had dirty cops on the job. He also said the only way to get them on the line for this was for them to use Darius and so Crawford signed off the sting. He wanted dirty cops to be caught out just as much as the next guy.

He also probably didn’t want the world to know that his cops were turning to the biggest drug dealer out there. Crawford gave the okay for the sting and so Voight put his team together. He had Darius demand more drugs than ever. He wanted to push the dirty cops into revealing who was in charge and it had shocked to his core when he later saw Lieutenant Mike Packer show up to this drug deal. Voight has worked alongside Packer. He thought Packer was true blue and never would have thought Packer would turn on his own.

Only Packer showed up to the drug deal. There was no denying he was involved and so Voight thought he got everything he needed. He took this information to Crawford who was just as stunned as he was. Together they brought the evidence of dirty cops to the State’s Attorney and she told them they didn’t have a case. She believed what they built against the dirty cops would collapse in open court. She then suggested that they name the CI in order to test his credibility and that’s where Voight hesitated.

Voight had made promises to Darius. Darius was supposed to be in the free and clear after all of this and yet Voight had needed to name him and so he did. He gave Darius’s name to the SA. He also warned Darius about it afterward. Voight told the other man that he had no choice. He had to take down the dirty cops and so he suggested that Darius leave town for a bit. Voight thought he was helping when he suggested Darius leave. And all the while Darius had been planning something because later on all the dirty cops were led to one location.

Intelligence had tracked them down back to the warehouse where the original drug bust was held. So, they went there, and they found all the dirty cops dead. Darius had seemingly lured them into a trap. Darius didn’t want to be named in open court and so he got rid of everyone standing in his way. It was all such a great plan that it forced Crawford and Voight into covering it up. They eventually put out the story that the dirty cops were all heroes who died in the line for fire. The story had worked with almost everyone and the only one that was pushing back was Upton.

Upton had lost a CI to Darius. Now, she was supposed to ignore the fact he killed a bunch of cops and that it was her own squad that was covering it up. Upton tried to make peace with that. She really did. She just couldn’t do it in the end and so Upton blew Darius’s cover. She told people on the street that he was working with the police.

And what do you know, Darius was later tortured and killed and there was even a dead rat found next to his body.