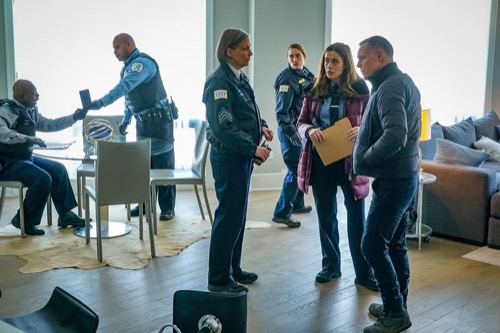 Kim and Adam share some laughs about their modern roommate parenting before she heads off to the call center. She gets a call from a scared female and tracks her location to send help. The woman cries before the call is disconnected. She has a hard time letting the situation go but moves onto the next call. At the end of her shift, she checks back again on that call and grabs the address from the caller. She heads to the local precinct where two cops blow her off, telling her that the wife said she made an accidental call to 911. Kim knows better and turns to leave but Trudy knows what she’s up to. They head out to the address together. Inside the apartment they find blood everywhere but nobodies. They find a male out in the stairwell, in an elevator. He appears to be dead.

Hank shows up at the scene. He and Kim talked to the two police officers that were brought to the home earlier. They look at the identification photos Kim has in her hand and they don’t recognize the wife. The woman at the house earlier was a brunette. Back at the precinct, Haley, and Jay interview the real wife. She admits that her husband George has a pension for prostitutes. He was supposed to be at work.

The team gets to work researching George’s background, his phone calls. They believe that a possible pimp might’ve done this to him. They find a person of interest named Daniel with a lengthy criminal past. The team contacts the FBI about Danielle. They come to visit and tell them if they have dumped into a human trafficking ring and Daniel is a mid-level offender. They all plan to work together.

Kim zones in on a girl on one of the websites named Mira. She brings her in and talks to her. Mira tells her that all of those girls are already gone and there’s no way she can save them. The girl is tough to crack but Kim keeps at her and gets her to break down and look at their missing women’s photo.

Mira gives them as much information as she can remember. Daniel and the men holding the girls keep them drugged, hungry and working. She tries to detail where they were taken, the house they stand. Kim takes all the information and the team gets to work. They find their whereabouts and head there. First, they go to the bar Mira described. Kevin puts a tracker underneath the van that they transport the girls in. Then they sit and wait. When the van starts moving they all drive to get ready to take the men out once night falls.

The team busts into the house at night, finding 18 women all drugged in bedrooms sleeping on floors. The pimp is not there. Kim arrives and does not see the woman she’s been looking for.

At the hospital, Hank and Kim talk to one of the girls name Natalie who seems to have turned from a victim into an abuser. They get her talking and she shares that their pimp was forced to kill George after their girl baby called 911. He took her somewhere to break her but Natalie won’t share where.

The team hits the streets, going from motel to motel. Kim gets a call from a dispatcher Who received a 911 call from a cell phone belonging to George Weller. Kim knows it’s her girl and calls out for back up while heading to the motel. She calls the cell phone while she’s driving and speaks to the girl who’s real name is Emma. She is terrified. Her pimp thinks she is in the shower.

Kim arrives first and radios to the team who are a couple of minutes out. When she hears Emma crying through the door she washes in and gets into an altercation with Danielle who beats up pretty badly but Kim ends up getting a few shots in. Emma is underwater in the tub. Kim pulls her out. The team arrives. They are all transported to the hospital.

Kim sits in a hospice bed where she stares out the window while the doctor tells her she has lost her baby after severe abdominal trauma. She doesn’t react, just staring. Adam comes in to comfort her and hold her hand.