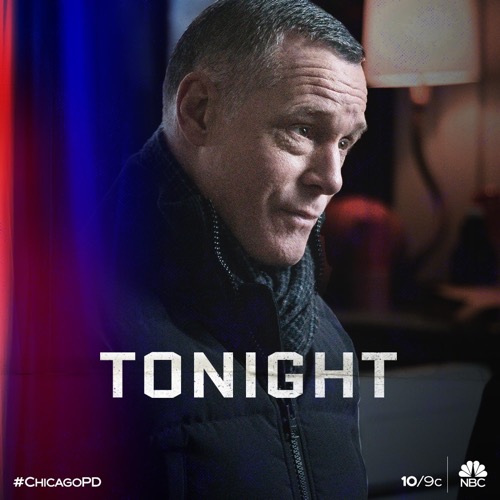 Tonight on NBC their drama Chicago PD returns with an all-new Wednesday, March 18, 2020, season 7 episode 17 called, “Before The Fall,” and we have your Chicago PD recap below. On tonight’s Chicago PD season 7 episode 17 as per the NBC synopsis, “Voight enlists the help of a reformed gang member to get a key witness’ testimony in a murder case. More lives are put on the line as a gang war brews.”

Hank finds a young child at night outside in a park with a sucking chest wound and an adult already dead. He calls for help. Homicide shows up. Hank tells them that he is taking the case and he doesn’t care what they say. It is his scene. It looks like a gang shooting gone wrong.

The next morning, the young girl is alive but critical. The team is looking into the case. They look at a video they collected from the park. They get a clear look at a possible suspect. Hank tracks him down at a local bar. Lamar denies any wrongdoing.

Hank goes to meet a friend, a man named Frank he once put in prison. Frank is teaching a class at a local church. He takes a break to talk to Hank who tells him about the shooting. He has come to talk to him because he knows that Frank knows all the kids in the neighborhood. He wants Frank to talk to Lamar and just get a name. Lamar isn’t the shooter but he certainly saw something. Hank gets a text. The young girl has died. He tells Frank.

Lamar meets with Frank while the team stays close out of sight. They watch a video in Frank’s office. Lamar gives a name, it is JoJo, leader of a local gang. The team heads to find him. They spot him at an abandoned building. He tries to run for it but Jay gets him. They bring him in. He proves he wasn’t there.

Jay and Haley hit the streets. Just as they turn a corner, a car comes out of nowhere, shooting everywhere. A young boy is struck as the car drives into a parked vehicle. Back at the station, Hank puts the pressure on JoJo. He needs to tell them what he knows.

Hank gets a call from his superior. Homicide is going to be helping them with the case and there’s nothing he can do about it. Meanwhile, the team gets points off of the car that went on a shooting spree when Jay and Haley were on the streets. The prints lead them to an apartment of a suspect who isn’t home. They find a gun hidden in the toilet tank that leads them to their next suspect. That suspect has a family who used to own a bar. It’s closed down but they head there and find a man obviously on drugs. They also find another man, a person of interest who is bleeding out on the floor.

After assessing the scene they realize the man they first came upon is the cousin of the man bleeding out on the floor. They learn that the man on the floor is a former prison buddy of Lamars. Lamar hired him to kill somebody in the park but things went awry. Hank and the team head back to Frank to help.

Frank and the team head to the park to set up a drug deal with Lamar. Frank goes off script and starts asking about JoJo. Lamar gets anxious but Frank reels it in and tells him he’ll think about getting him the drugs.

After their plan comes together, the team works to get Lamar. Kevin poses as the buyer and a friend of Frank’s at the church. During the drug exchange, Lamar dismisses Frank. Frank becomes very angry. This is his church. Lamar starts to talk back, angering Frank who then punches him in the face. They get into a fight. Outside, Hank tells them to all stand down but the homicide agent loses it. He runs in and causes more chaos. Lamar really starts to attack Frank making him bleed from the head. They all have to intervene. Hank is not happy.

Later, Hank comes back to the precinct and he’s beside himself because Frank has bleeding on the brain and broken ribs. The homicide agent tells him that he went by the book but Hank loses it and punches him in the face before going to his office.