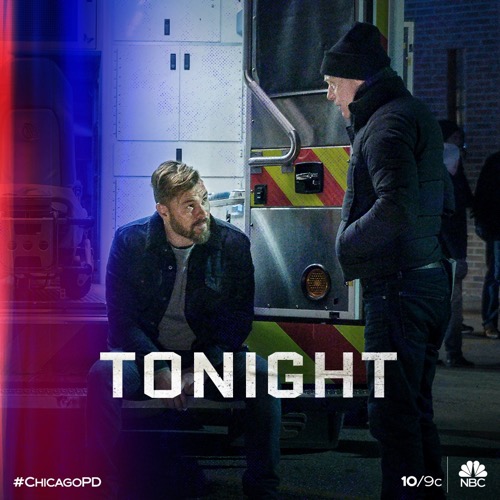 Tonight on NBC their drama Chicago PD returns with an all-new Wednesday, March 25, 2020, season 7 episode 19 called, “Buried Secrets,” and we have your Chicago PD recap below. In tonight’s Chicago PD season 7 episode 19 as per the NBC synopsis, “The clock is on after Ruzek witnesses a woman’s kidnapping and the team races to put the pieces together. Burgess tries to connect with Ruzek outside of work but he mysteriously distances himself from her.”

Ruzek is at a bar, he talks to the barmaid, Sherri, and then heads outside. While outside, he sees a woman walking, there is a man following her closely, he pushes her towards an SUV, the door opens and the is grabbed inside. Ruzek calls it in, then he takes someone’s car and goes into pursuit, he doesn’t catch her, he ends up smashing the vehicle when he swerves to avoid some pedestrians. Voight is there, he smells liquor on Ruzek who swears he is not drunk and has his head in the game.

Back at the station, Burgess is worried about Ruzek and asks him how is doing. Ruzek gives a good account of what the woman and the SUV looked like.

Ruzek and Burgess head back to the bar, Sherri is surprised to find out that Burgess is a cop, he said he was a city worker. Burgess asks for credit card receipts from the evening before. Ruzek goes to look at video surveillance, Burgess tells Sherri it wasn’t technically a lie that Burgess didn’t tell her he was a cop, he just left out some details. Sherri replies that she just likes to know who she is sleeping with. Sherri says it doesn’t matter anyway, he is hung up on his ex, that is all he could talk about.

Chavez checks all the social media accounts for the women who were in the bar the night before and she finds one woman posted a video and Ruzek’s mystery victim walked right by, the team is able to get a clear picture of her face and facial recognition, her name is Charlotte Hanslow, she is 21 years old, the daughter of one of the richest men in Chicago.

Voight, Ruzek, and Burgess head over to the Hanslow residence and tell Charlotte’s parents what happened. Voight has a hunch, he thinks the father knows about and calls him on it. He admits it, a man called, he demanded two million dollars and if he called the police he would kill her. The team watches the video the kidnapper sent, with her parents. Voight tells the father that moving forward they need to be on the same page. Voight hands Ruzek the tablet with the video and tells him to get it over to the OCD crime lab. Voight promises the parents they are going to do everything they can to find her.

The mother says that Charlotte was staying in the city with a friend when she was abducted, she gives Burgess the contact details of the friend. The father says he has no enemies and has no idea who could have taken his daughter. Ruzek asks if he got instructions on where to drop the money, the kidnapper didn’t. The video was made only a few minutes after Charlotte was abducted, so they couldn’t have taken her far. Trudy says there was a 911 call, someone reported a woman screaming and trying to get out of a car.

Burgess remembers a B&W that was engraved on the floor in the video of Charlotte, she does a search for possible B&W places in the area and finds a possible location. In the car, Burgess tells Ruzek that she knows he is sleeping with Sherri.

Voight and backup arrive at the building with Burgess and Ruzek, they force open the door and go inside. It is the right place, the B&K is there. They continue to look around and find two men dead. The two men that are dead engaged in a firefight. One of the guys is the same guy that Ruzek followed outside the bar, the other one is an ex-cop, he owns his own security company and worked for Hanslow. Halstead tells Voight he is wondering how the security guy could have been them there.

Voight goes back to see Hanslow and shows him a photo of his security guard dead. Voight then tells him that he gave the guard information that he didn’t give them, and In fact, he thinks that he knows who took his daughter. Hanslow gives the name, Gary Stevens, the father of a former employee of his. His son made up stories and the father tried to blackmail him.

Gary’s son, Dylan has been missing for two weeks, he filed a missing person’s report. He has a history of mental illness and drug abuse. Gary thinks that Hanslow had something to do with his son’s disappearance.

There are more lies, Hanslow did see Dylan, in fact, he was in a relationship with him. Hanslow says he just knew him from one of his stores, he threatened to commit suicide and he was just trying to help him.

The team finds Gary and Charlotte. Voight radios Gary and tells him to release Charlotte and he can guarantee her safety. Gary says he wants his son, he has one hour. Hanslow shows up, Voight tells him that Gary says he never demanded money, he just wants his son. A shot goes off, all the officers are heading in. Ruzek is in the lead, he heads upstairs. Gary knows he is there and says if he takes one more step he is going to kill her. Ruzek talks Gary into letting him in the room. Ruzek tells him that he wants to help him find his son. Ruzek tells him that this girl has nothing to do with this and she is the same age as his boy. Ruzek sits down with them and tells Gary that nobody else is coming in. Ruzek talks to Gary about the last day he spoke to Dylan, he says he was worried, his son said he was going to confront Hanslow to tell his family about their relationship.

Burgess and Chavez go to Hanslow’s house, to search his vehicle. Burgess asks his wife questions about the day Dylan disappeared, it was a Saturday, she says she remembers him coming home and he had mud on his shoes, it didn’t make sense what he was doing in the woods, but she didn’t question him. It doesn’t take long for them to get police dogs on the property and find Dylan’s body.

Gary is fading, Burgess shows him a photo and tells him that they found his boy.

Voight tells off Hanslow and calls him a piece of garbage.

Back at the station, Ruzk and Burgess are in the locker room when he asks her to go out for dinner. He says he was trying to try new things and make himself happy, but it didn’t work. He would rather go out to dinner with her, it will make him smile, she admits it will make her smile too.