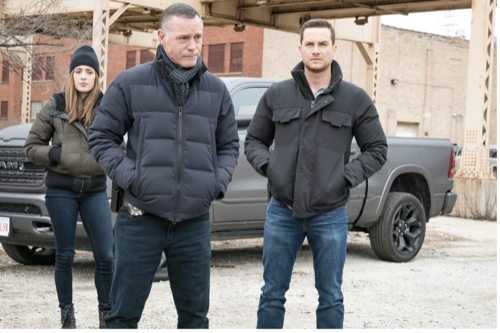 Tonight on NBC their drama Chicago PD returns with an all-new Wednesday, November 18, 2020, season 8 episode 2 called, “White Knuckle,” and we have your Chicago PD recap below. In tonight’s Chicago PD season 8 episode 2 as per the NBC synopsis, “The son of an influential former officer is implicated in a murder, and Moore pressures Voight to charge him quickly so that the CPD isn’t accused of preferential treatment.

The stakes are raised in Atwater’s fight against the blue wall after patrol officers stop responding to his team’s calls. Voight wants to help Atwater end this mistreatment but the two can’t agree on the right way to handle it.”

Atwater is at home, he grabs a bag and heads to the station. Once there, he enters a cop car and tries to log into the system but access is denied and his radio doesn’t work. Voight is there, he says he was jumped and didn’t see the guys. Voight says there are ways, Atwater tells him that he is good. Atwater goes with Voight in his car, they go to the scene of an incident. A boy is holding a knife near a young woman, they are lying on the floor, the woman is already dead, they get him off of her and cuff him. The victim is Ila Sherman, the killer is Billy Bradan, ex-cop Alderman Braden’s son.

Deputy Superintendant Miller is back to speak to Voight, she wants to know if he never met Alderman Braden. She tells him that there should be no preferential treatment for Alderman’s son. She wants him to press murder charges as soon as possible. They are going to treat this kid like any other offender.

Voight interrogates Billy with Atwater. Voight tells him that the way they found him with the knife, it doesn’t look good. Atwater says it looked like a crime of passion. Billy says the man in the apartment killed her, not him. He was white, in his 40’s, green eyes, wearing a suit, a shirt, blue tie, he had this voice like he was telling a story, he knew what he wanted to say. Billy asks to see Ila. Upton and Halstead go back to the apartment to look around.

Ruzek is outside the apartment, he questions a woman, she noticed a car outside. Meanwhile, Alderman is at the station and he is furious that his son was questioned while he was high. Miller is there, she takes Alderman to a quiet place to talk.

Miller tells Voight that he disobeyed a direct order by not arresting Billy within twelve hours. Voight asks her if Billy was black would she be pressing him to arrest Billy. And, he doesn’t care whose father is his.

Voight visits Billy again, he asks him if he is sober and tells him that his father and lawyer are there right now. Billy freaks out, he says his father thinks he did this, he doesn’t want his lawyers. He doesn’t know what happened, but he claims he didn’t kill Ila.

Burgess and Halstead are trying to map out the details of the case. The first time Billy entered rehab was when he was a month shy of his fourteen birthday. Meanwhile, Billy tells him that he was sober for a year, until last night. The map shows that Ila and Billy really changed each other and they were getting their lives on track.

During the night of the incident, Billy was alone with Ila, when he got there she already had the heroin. They drank and did drugs, a year of sobriety gone. He passed out and when he woke up he heard her arguing with someone. He passed out again, then when he woke up she was on the floor with blood. Ruzek ran Ila’s cell phone, everything matches with Billy’s story, except when she texted him she was in Lake Forest; the phone tagged the location. Voight tells them to go with that.

They head to the location, a woman named Hadley answers the door, and Ruzek finds a hidden camera. They go inside the building and find a basement full of narcotics. Atwater gets a call from Jordan, his security alarm just went off. Kevin gets home and he searches the place, he thinks he is being bugged, and he is right, he finds a wire under a light switch.

Back at the station, Atwater is looking at his security footage, Ruzek tells him that they are coming after him and they need to put a stop to it. Voight listens in when Atwater says they jumped him, broke into his house where his family lives. Voight tells the two to get back to work.

Atwater shows Billy a photo of Hadley, he doesn’t know who she is. Billy looks at the photo and sees the drugs, he says Ila had a bag full of them. Halstead puts a photo on the board of Tim Rollins, he has a history of violence and two priors, both Ila and Hadley have him on their social media accounts. The team believes he is an ex-boyfriend and Ila stole the drugs to get back him.

They find Tim’s car, it has been cleaned. All of a sudden, they see Tim and a chase begins. A gunshot goes off, Ruzek has been hit but it didn’t go through. Atwater blames himself that Ruzek got shot.

At the station Trudy tells Atwater that Mackenzie is the one coming after him, he tells him he had orders, they are going to make him afraid of his own shadow, that is how they break him.

They get another lead on Tim, the team heads out and Voight tells them not to depend on patrol this time. They find their guy, Atwater and Ruzek tackles him to the ground.

Atwater is leaving the station and one of Dwight’s supporters is there and he tells him that he is not going to stop until he has his badge.