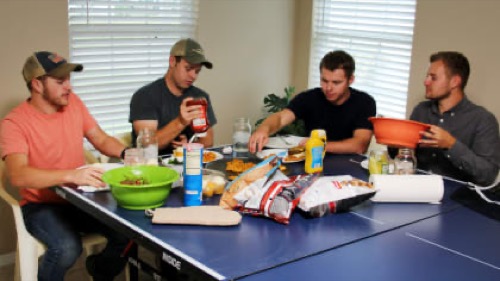 Some of the Duggars go to the Bahamas to help after a hurricane. Jed and Jere show off their bachelor pad. The family competes in a corn maze race.”

Hurricane Dorian hit. It hit and devastated the Bahamas because it was a Category Five. The sheer amount of destruction, in this case, was one thing to hear and another to witness. The Duggar family was one of the few to witness it. They flew down there to help and so they made sure people got water and supplies. The family has always given back. This time was no different and the family stayed in the Bahamas as they helped the country recover. Now, not everyone was able to go on the trip because of small babies and such. Some of them had stayed home. Jessa and her husband had stayed behind.

They have three small kids. It was a task for them to even go on a small road trip. For example, Jessa and her husband Ben have these friends that just moved to Kansas City and so their family took their first trip as a family of five to visit them. It had been chaotic the whole way. Jessa and Ben had learned a few things over the years. They know to walk with snacks. They also don’t put the kids in good clothes right away. They wait until they’re about five minutes out before they change the kids out of their pajamas. It saves the parents of having to clean up after the kids multiple times and this method at least ensures that the kids are presentable when they come out of the car.

The Duggar family has taken plenty of road trips. Especially as babies. The trick to it is to pack an emergency box like one Michelle would do because she put everything in there. She put cold medicine, extra diapers, and even threw in some perfume/cologne as well. Michelle taught her kids to be prepared for anything. They’ve tried following her example and it hasn’t failed them yet. Jessa and Ben made it to Kansas City with everyone still intact. They went to an apple orchard to meet up with their friends and that’s where it came out that Ben was a germaphobe. He didn’t want any of the apples on the ground because they had dirt on them.

Ben wanted the apples high up in the trees. He was willing to hurt himself just to get one and his kids were learning to be just as bad. Spurgeon didn’t want any of the low hanging fruit. He thought there would be worms in them from the ground. He wanted one like his father and so Ben was climbing for apples for a while. He was doing that as Jinger and her husband were taking their daughter to her first swimming lessons. The Duggars have been sporadic in teaching their kids to swim. Their oldest children know how to swim and their youngest children know to swim. It was the middle children that didn’t know how and Jinger was one of them.

Jinger’s husband Jeremy knew how to swim. He learned as a kid by going into his grandparents’ swimming pool and so both Jinger and Jeremy wanted their daughter to learn. They later brought her to her class. She enjoyed being in the water and she was doing pretty okay until her face went into the water. Felicity broke into tears when that happened. She also saw her mother so she wanted her mother and Jinger had to hide behind a pillar before Felicity was okay. Felicity’s swim lesson was basically on par with any other child her age. There were tears of course, but her recovery time was much better off than an adult’s.

Back at home, the twins Jedidiah and Jeremiah moved out on their own. The twins got a house together and that wasn’t typical for a Duggar child. The kids usually stayed at home until they were married. They used that time to save money and so very rare when the kids before then. The twins were different. They got their own place and they put a huge ping-pong table in the living room. They got that before they got a dining table and there wasn’t any place to use as a table so they ended up using the ping-pong table when their brothers came over to visit. The twins were still young. They were still figuring things out and hopefully, this teaches them to get an actual dining table.

Jessa and Ben took their kids to the zoo with their friends and their friends’ kids. It was a bit hard to navigate because their middle child was a wanderer. Henry would disappear and they would find him playing in the sink. Ben made sure to wash his hands and he used hand sanitizer as well. The family fed the birds at the zoo. They also had to go indoors because it was raining a little and they had fun with the indoor activities. Overall, it was a good trip for everyone. They were back home in time for a family fun night. A family fun night was changed up this time. Jim Bob and Michelle chose an outdoor activity for everyone to do.