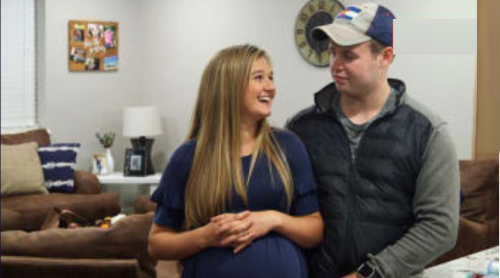 Will he learn to shred or play it safe? Later, Kendra goes into labour. As contractions intensify quickly, her birth team worries that her doctor might not arrive in time.”

Kendra began experiencing contractions during the Duggar Dash. She was due around the time and so she knew there was a risk that all the activities might headstart her labor. She also knew she was ready by then. Kendra and Joe were both ready to welcome their baby daughter. It just didn’t happen as fast as they thought it would. Kendra’s contractions proved to be a false alarm and so they still had time to get their house ready. Kendra and Joe relied on his siblings for help. His brothers and sisters came by one day and they all helped clean the house from top to bottom. They prepared the house for when the baby comes.

They also wrecked the house again. It was all of Joe’s younger siblings and so they cleaned the house. They then eat or had snacks. They got crumbs all over the sofa, the floor, and the countertops. Kendra had to ask them to clean up after themselves. Only they were all pointing fingers at each other and so it was never clear whose fault it was that the house got messy again. They all just cleaned up together. They got the house back in its right state and they completed all of Kendra’s lists. Kendra and Joe had finished what they set out to do. They now just have to wait for the baby to arrive.

Luckily for them, it wasn’t long before Kendra began to experience even more contractions. She was five days from her due date when she started to feel like it was the real deal and so they dropped their son. Their little boy is still a toddler. He doesn’t really understand where the baby is coming from, but he has been told that the baby is coming and soon enough he was going to figure out the baby was permanent when he went back home with his parents. Young Garrett is a healthy child. There was no reason to believe their second child wouldn’t be just as healthy and so neither Kendra nor Joe had to worry about certain issues like Jessa and Ben did.

Jessa and Ben noticed that their second son Henry is behind the learning curve with his speech. He was eighteen months old when they realized he wasn’t really speaking and they later took him to see a speech therapist after his second birthday. Henry understands what’s going on. He knows and he can communicate with those around him. He just can’t voice it properly. It took him almost half a year to get where he was supposed to be thanks to the speech therapist. He now can voice what he’s feeling and, sometimes when he does talk, he leans more towards whispering. Henry has to be reminded to use his big boy’s voice. And he’s getting better and better over time.

Jinger and Jeremy’s daughter was a little bit younger than Henry, but she spoke rather clearly for her age and she would often repeat words from her parents. Their daughter Felicity was even learning to skateboard. She was doing so well that Jeremy realized he wanted to learn and so he reached out to a friend who was a professional skateboarder. Jeremy took lessons from his friend. He eventually believed he was proficient enough to try out ramps. He had to try a small ramp several times before he learned to keep his balance and afterward he began taking more risks. And he did several interesting feats for a beginner.

But back with Kendra, she and her husband didn’t really follow their birth plan. They waited until she was sure she was in labor before they went to the hospital. Only their original plan was to wait until Kendra was in absolute pain before she went in. She knew that holding off until she was further in her labor would have speed things up at the hospital and so they deviated from the plan because it was already night time. Kendra’s husband Joe knew she wouldn’t be able to fall asleep while she was in labor. He also knew he wouldn’t be able to sleep and so he convinced her to go to the hospital right from then.

Kendra later arrived at the hospital only to find her doctor wasn’t available. Her doctor was delivering another baby at another hospital and so it was a good thing she had time to spare. Kendra and Joe started walking the halls to hasten her labor. It worked. Kendra’s waters broke and Joe called Kendra’s mom down to the hospital. Things began happening really fast once she was in active labor. Kendra’s pain got really intense and she was nauseous. She threw up a few times. She didn’t have that with her first labor and so this baby was already proving to be different. It also didn’t help that the doctor still wasn’t there.

Kendra felt she was ready to deliver, but her doctor still wasn’t there. Her doctor was still at the other hospital and all the nurses wanted Kendra waited. She tried to. She really did and she just couldn’t anymore because the baby wanted out. Kendra quickly delivered her baby daughter. The baby’s name is Addison Renee. She was almost eight pounds at birth. Which was a surprise? The baby had been measuring small while she was in Kendra’s stomach and so they thought she would be six pounds if that. Her turning out to be a big baby was therefore great news. They didn’t have to worry about her being too small or delicate.

Addison was a welcomed addition.