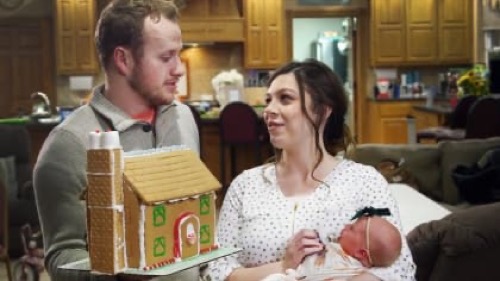 Tonight on TLC their reality show Counting On airs with an all-new Monday, August 11, 2020, season 11 episode 6 and we have your Counting On recap below.  On tonight’s Counting On season 11 episode 6 “A Beautiful Miracle,” as per the TLC synopsis, “Lauren goes into labor 11 days before her due date; she and Josiah can’t wait to meet their baby; Jinger and Jeremy join Family Fun Night in Arkansas via video chat where they share a special surprise.”

Josiah’s wife Lauren went into labor. She was a few days early when she first started to experience contractions and it was her first birth. This is going to be her first child. Lauren hadn’t really known what to do. She reached out to friends and family for advice. They were the ones to tell her to wait until she was in active labor before going into the hospital. Lauren opted out for having at home birth because she’s had a miscarriage in the past and she was worried something might happen in this pregnancy as well. She was also told by the family that it was better to have all the equipment there and not need it rather than to need it and not have it.

Lauren had a great doctor. She felt she could trust her doctor and so she went into the hospital a little earlier than planned. She was four to five centimeters when she went in. Only Lauren’s contractions were getting closer together and so it was better for mother and baby to go to the hospital from then. Lauren had also previously stated that she wanted to have a natural birth. She didn’t want an epidural as a personal choice and so what she didn’t count on was how painful childbirth proved to be. Her baby was in an awkward position. Lauren was in a lot of pain and she later changed about the epidural when she was told it was for the best.

Lauren had the first epidural early on. It wasn’t really taking off because she was still in a lot of pain and so she was eventually given a second epidural which again didn’t seem to help. Lauren experienced terrible back pain because of the way the baby was laying. She had even needed something stronger than an epidural and by then she had been in labor for more than a day. Lauren was given something to help her sleep. It neutralized her pain and she was able to sleep through some of her labor. Lauren and Josiah were still at the hospital when the rest of their families began waking up.

Jessa sympathized with Lauren because her first labor was a long one too. She, therefore, came up with the idea of making a welcome basket for Lauren as a first-time mother, and she went shopping for items with her family. Jessa’s husband is a germaphobe. He made sure to wipe down the cart that had the fun car attached for the kids and he also wanted to buy watermelon just to throw it away because one his sons had accidentally cracked it. It was their eldest Spurgeon who dropped the watermelon on the floor. It cracked down the middle and Ben didn’t want to eat it afterward. He wanted to throw it away because he didn’t want to eat something that fell on the floor.

Back at the hospital, Lauren had been in labor for almost two whole days. She was in her forty-third hour of labor when the pain began intensifying and so the doctor believed it was finally time for her to push. Lauren was so exhausted by then. She slept for a few hours in between the contraction and it wasn’t enough. She was so exhausted that it took longer than normal for her to give birth. She thankfully delivered a very healthy little girl. Her and Josiah’s daughter was born with these big eyes and her eyes were just wide open. The baby had wanted to take everything in. Her name is Bella and she is beautiful.

Bella was later visited at the hospital by her grandparents. Michelle was actually there for the birth along with Josiah’s sister Jill who is a midwife. They helped Lauren through her labor. Then later the family came together for a family fun event. Michelle and Jim Bob hosted another event at their house. This time their children all competed for the best gingerbread house. The couple got a bunch of gingerbread kits and their kids were supposed to decorate their individual houses with frosting and candy. They did have two boys who made a gingerbread ship and somehow their ship was made inedible with all the tools they used to create it.

Lauren and her husband Josiah were also at the event. They made their house special by crafting a chimney made out of marshmallows and Jinger and Jeremy made their house special by announcing they were pregnant with their second child. They did so by creating a gingerbread family and the mommy gingerbread was pregnant. This was how their whole family was told the good news. Everyone celebrated when they put the clues together. It was Jessa who pointed out Jinger’s baby was going to be the eighteenth grandchild for her parents and so everyone thought Jinger’s story would end in a happy ending. And sadly it did not.

Jinger started to cramp later that same day. Her mother and sisters soon flew out to be with her and Jinger was ultimately left in tears.