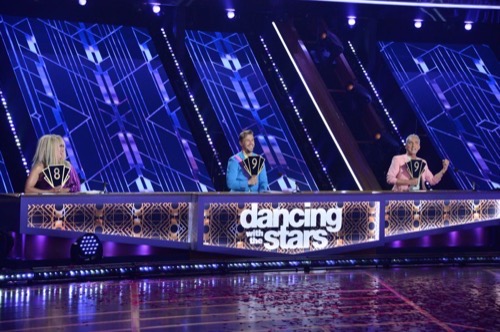 Tonight on ABC the glitz and the glimmer returns to the ballroom as Dancing With The Stars 2020 season 29 episode 6 of DWTS airs! We have your all-new Monday, October 19, 2020, season 29 Episode 6 Dancing With The Stars recap below! On tonight’s DWTS Season 29 episode 6 “Top 11,” as per the ABC synopsis, “The show will start with host Tyra Banks walking out to the ballroom to “I’m Coming Out” by Diana Ross. In addition, judge Derek Hough and Hayley Erbert will dance a special Paso Doble to “Uccen” by Taalbi Brothers.

Vying for America’s vote, each couple will dance to a variety of songs including “Sorry” by Justin Bieber, “She’s Always a Woman” by Billy Joel, “Celebration” by Kool & The Gang, and “On the Floor” by Jennifer Lopez featuring Pitbull, among others.”

Judges Comments: Derek: “Let’s talk about that costume, holy moly. Jennifer Lopez will be proud, I love fringe. There were a few arm connections, misses, but a great way to start the show.” Bruno: “Great performance, but salsa has to have a much more grounded action. You tended to dance it all very lifted, you have to move your hips a bit more in the salsa.” Carrie Ann: “This wasn’t your best dance for me, you had a slow start, once you were side by side you found it, I enjoyed watching it. It looked like you were very light on your feet and you have to be more grounded.” Judges Scores: Carrie Ann: 7, Derek: 8, Bruno: 7 = 22/30

Judges Comments: Bruno: “Feeling good, looking good, and deliciously bonkers. At times I felt I was in a rave, then it was like Fame, I don’t know what it was but it worked.” Carrie Ann: “I felt it was amazing, you threw in every dance step possible. I was so happy, even though it was a war of two worlds. It worked, great job.” Derek: “Yeah, talk about jazz 101. You were so clean and together the entire time, I couldn’t stop laughing and smiling in a good way.” Judges Scores: Carrie Ann: 9, Derek: 9, Bruno: 8 = 26/30

Judges Comments: Carrie Ann: “Wow, there is nothing more exciting than to watch someone come into their own. You are amazing in the ballroom, that was so refined, you were radiant.” Derek: “Absolutely, there is a softness about you tonight, you look like you are enjoying it, it was so beautiful and your balance was great.” Bruno: “That was a classic rumba. You pitched it right, the right balance of sensuality and romance. It wasn’t forced, your face was inspired, your lines, your shape, and your control.” Judges Scores: Carrie Ann: 9, Derek: 9, Bruno: 9 = 27/30

Judges Comments: Derek: “It happens to the best of us, but I have to commend you for continuing on. It happens to all of us, it is part of the highs and lows. But that opening split, I was like wow girl. The cha cha moments were sharp, but it happens to the best of us.” Bruno: “The sections that you did well were good, but there were a lot of mistakes. You handled it as best as you could.” Carrie Ann: “I am really proud of you, I mean it is not easy to find yourself back. For the recovery, I would give you a ten.” Judges Scores: Carrie Ann: 6, Derek: 6, Bruno: 6 = 18/30

Judges Comments: Bruno: “Very bright, very colorful. You have the right feel for the dance, you get into it, your timing is good. But the cha cha is about the back of the foot, you have to work on it.” Carrie Ann: “I enjoy watching you dance, you are very comfortable with yourself. You have an ease about you. There were a lot of mistakes, but I want to continue to encourage you.” Derek: “I give you ten for joy every time. On a technical standpoint, it’s a cardinal sin in cha cha with heel leads.” Judges Scores: Carrie Ann: 7, Derek: 7, Bruno: 7 = 21/30

Judges Comments: Carrie Ann: “I am without words really. There is so beautiful happening, the way you expressed your hands, the fluidity. One of the beautiful things about this show is we get to see the different layers in people that we didn’t know. You are a Viennese Waltz, hip hop, mega mogul.” Derek: “I don’t know how you felt in this dance but for me, the flowness of your body was incredibly masculine, it was beautiful to watch. A little more rise and fall but it was beautiful.” Bruno: “It was charming and endearing. I loved seeing you so inspired. You were turning into a swan, there was a gentleness. You were great.” Judges Scores: Carrie Ann: 8, Derek: 8, Bruno: 8 = 24/30

Emmy® Award-winning host of “The Real” and sideline correspondent on “Holey Moley,” Jeannie Mai, and pro Brandon Armstrong dancing the Rumba to “You Gotta Be” by Des’ree.

Judges Comments: Derek: “That was such a sensual, and really good. Your legs were so straight, it was so good. Beware of your arms a little bit, don’t let it looked forced, well done.” Bruno: “Right up my alley, you smoldering fire. So much passion, you have the uncanny ability to transform your character in every dance. It is all about passion.” Carrie Ann: “You are stunning, and I love how much you do, you dance at your edge. Work a little bit on your transition. I salute you, you are sexy and a fighter.” Judges Scores: Carrie Ann: 8, Derek: 8, Bruno: 9 = 25/30

Judges Comments: Bruno: “Don’t be sorry, just do it. You are solid, you always deliver, you are always on time. You did a great samba, you put a bounce in it, well done.” Carrie Ann: “Yay, finally. I feel like that was a breakthrough for you. It was outward, and downward, and forward. You had the right balance, you could have had that chest opened a little more.” Derek: “When in doubt, shake it out and you shook it. It was so much fun to watch, you had a great bounce, you made it look easy, well done.” Judges Scores: Carrie Ann: 9, Derek: 9, Bruno: 9 = 27/30

Judges Comments: Carrie Ann: “Your mom and dad are watching over you and are very proud. I could feel all your emotions, it was exciting. Please point your toes.” Derek: “You are extraordinary, you are full of joy and light. We felt the dance. I want you to improve, when you lift think about your foot. Well done.” Bruno: “That was so emotionally engaging and raw, you gave everything you had. There were a few technical problems, but you did a great job.” Judges Scores: Carrie Ann: 8, Derek: 8, Bruno: 8 = 24/30

Kaitlyn Bristowe (“The Bachelor,” “The Bachelorette”) and pro Artem Chigvintsev dancing the Samba to “Sorry” by Justin Bieber.

Judges Comments: Derek: “I am sorry, that was fantastic, it was great. Every arm was perfectly placed. One thing, a little more focus, sharper head movement. It was a clinic of a samba.” Bruno: “I am a believer too, I believe in you. That was a first-class samba. You managed to look elegant in a samba.” Carrie Ann: “It was well executed, I was not super impressed. It is a competitive season, you want to win, you need to give us more, you need to attack.” Judges Scores: Carrie Ann: 9, Derek: 9, Bruno: 9 = 27/30

Actress Justina Machado (“One Day at a Time”) and pro Sasha Farber dancing the Viennese Waltz to “She’s Always a Woman” by Billy Joel.

Judges Comments: Bruno: “You are still on the crest of a wave, light as a feather, you are radiant. I love to watch you dance, you fill us all with joy.” Carrie Ann: “Every time you come out on the dance floor I know it is going to be good. You are refined, there was more emotion, you took it to another level. You are a beautiful dancer and I love the joy you bring to the dance floor.” Derek: “You are so reliable, your arms were beautiful, you were so much in synch, gorgeous, just wonderful.” Judges Scores: Carrie Ann: 9, Derek: 9, Bruno: 9 = 27/30