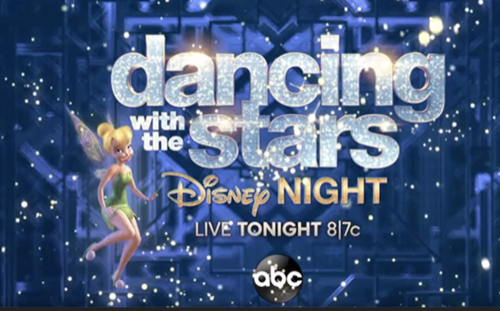 Tonight on ABC the glitz and the glimmer returns to the ballroom as Dancing With The Stars when season 29 episode 3 of DWTS airs! We have your all-new Monday, September 28, 2020, season 29 Episode 3 Dancing With The Stars recap below! On tonight’s DWTS Season 29 episode 3 “Disney Night,” as per the ABC synopsis, “With a dash of pixie dust and a touch of illusion, 14 celebrity and pro-dancer couples compete for the third week as the magic of Disney returns to the ballroom live for the 2020 season. ”

It’s Disney night on Dancing with the Stars.

Skai Jackson and Alan Bersten dancing the jive to “Almost There” from “The Princess and the Frog.”

Judges Comments: Derek: “Skai you look like a beautiful princess out there. Last week you had a moment, and I am still not head over heels. In jive, you want your nose over your toes, but you have a lot of potentials.” Bruno: “That was a very difficult dance, be careful though, in jive you have to maintain elasticity in your legs.” Carrie Ann: “At the top of the dance, you looked a little nervous, you kind of dancing to nobody, but you got right back on track, your energy came back.” Judges Comments: Carrie Ann: 6, Derek: 6, Bruno: 6 = 18/30

Monica Aldama and Val Chmerkovskiy dancing the waltz to “Part of Your World” from “The Little Mermaid.”

Judges Comments: Bruno: “You had so much confidence and connection, so good to say that. You were fluid and flowing but be careful you don’t lose your posture, so much better.” Carrie Ann: “You were like a different person on the dance floor tonight. When you fun, we have fun watching you. Your body relaxes, and things happen when you relax. Well done.” Derek: “Absolutely beautiful, but watch your feet a little bit. This was so much better than last week.” Judges Scores: Carrie Ann: 7, Derek: 7, Bruno: 7 = 21/30

Justina Machado and Sasha Farber dancing the Charleston to “Supercalifragilisticexpialidocious” from “Mary Poppins.”

Judges Comments: Carrie Ann: “I loved it, what I think is so incredible about you two specifically is that you are perfectly in synch. Very sharp and clean, but could have used a tiny bit more of energy.” Derek: “I knew you were going to crush this routine, it matches your personality so much. However, when you think of Charleston you think of swivels and footwork and I didn’t get that. There could have been more energy and sharper for this routine, but I think you are great.” Bruno: “You are delicious, almost addictive. This was like a wonderful vaudevillian music hall performance. Great performance though.” Judges Scores: Carrie Ann: 7, Derek: 6, Bruno: 6 = 19/30

AJ McLean and Cheryl Burke dancing the quickstep to “Prince Ali” from “Aladdin.”

Judges Comments: Derek: “I can always rely on you to put a smile on my face, you are always fully committed to every performance. Your frame was pretty good, great job.” Bruno: “I was watching it and like, is that him! I loved it, you actually kept the quickstep going very well.” Carrie Ann: “I like that you put your own spin on it. I liked it, it was funky in the middle. Well done.” Judges Comments: Carrie Ann: 7, Derek: 7, Bruno: 7 = 21/30

Anne Heche and Keo Motsepe dancing the quickstep to “Zero to Hero” from “Hercules.”

Judges Comments: Bruno: “You didn’t do that well, but it was quite entertaining.” Carrie Ann: “I loved the start, I thought you were off to such a great start, and then you lost control. I am so pumped because you started off so strong.” Derek: “I have a suggestion, in rehearsal, I would love for you to learn the routine and be able to dance the entire routine yourself, that way you are on your own feet. Then when you join, you are two people coming together. Love your commitment to the dancing, well done.” Judges Scores: Carrie Ann: 5, Derek: 5, Bruno: 5 = 15/30

Jeannie Mai and Brandon Armstrong dancing the Viennese waltz to “Married Life” from “Up.”

Judges Comments: Carrie Ann: “You are adorable and smooth, it’s like you found your pace. As a partnership the balance is incredible. Well done.” Derek: “This was beautiful, you breathe through your movement, your frame was fantastic. Honestly, your best performance.” Bruno: “You really have captured the essence of the film, that was dancing as acting, pure storytelling, two actors perfectly in tuned.” Judges Scores: Carrie Ann: 7, Derek: 7, Bruno: 8 = 22/30

Nelly and Daniella Karagach dancing the foxtrot to “It’s Alright” from “Soul.”

Judges Comments: Derek: “I thought it was great, really good. This is your first ballroom dance and it was smooth. I am also starting to like those shoes. Good job.” Bruno: “Charming, and you behaved like a real gentleman with your lady. It was a proper slow foxtrot, just beware of your shoulders.” Carrie Ann: “There is a naturalness to you that is really enjoyable to watch. I would say a break out next time. Stop being safe.” Judges Scores: Carrie Ann: 6, Derek: 6, Bruno: 6 = 18/30

Carole Baskin and Pasha Pashkov dancing the samba to the “Circle of Life” from “The Lion King.”

Judges Comments: “I am stunned, I actually have never seen a samba like this one. You just walked through it, there should be bounce and energy.” Carrie Ann: “You look beautiful, you danced that dance with a lot of love. The samba is much more, and it was lacking a lot, but I want to salute you for what you put into that dance.” Derek: “Thank you for loving big cats and taking care of them and protecting them. A 10 for costume, hear, and makeup. I will say the dancing was, well there was no bounce and not rhythm.” Judges Scores: Carrie Ann: 5, Derek: 4, Bruno: 3 = 12/30

Kaitlyn Bristowe and Artem Chigvintsev dancing the rumba to “How Far I’ll Go” from “Moana.”

Judges Comments: Carrie Ann: “For me, the best dance of the night by miles, that was so good. You brought it all together and told the story. I was elated, well done, great job.” Derek: “You are such a beautiful dancer and such fluidity in your movements. I kind of disagree a bit, it was missing the Latin shoes.” Bruno: “You reminded me of the shape of water, breaking waves, continuous movement, continual flow, it was wonderful.” Judges Scores: Carrie Ann: 8, Derek: 7, Bruno: 8 = 23/30

Vernon Davis and Peta Murgatroyd dancing the quickstep to “Be Our Guest” from “Beauty and the Beast.”

Judges Comments: Derek: “First of all, real men play candlesticks. I just love watching you dance, it was fantastic. Great job.” Bruno: “You transformed into the perfect Mr. Lumiere. You exude confidence, you were confident with her. Well done.” Carrie Ann: “What is amazing is that you guys found your balance in the partnership. That was one of my favorite dances of the night, it was happiness.” Judges Scores: Carrie Ann: 8, Derek: 7, Bruno: 7 = 22/30

Nev Schulman and Jenna Johnson dancing the Argentine tango to “Angelica” from “Pirates of the Caribbean: On Stranger Tides.”

Judges Comments: Bruno: “Another hit for captain Jack Sparrow. You managed to keep an inebriated mannerism, yet you maintained the Argentine tango all the way through, I loved it.” Carrie Ann: “I really love the way you went in and out of character and your lifts were appropriate, you didn’t hide behind it, well done.” Derek: “Now we are cooking with hot sauce, that was strong. You nailed it, well done.” Judges Scores: Carrie Ann: 8, Derek: 8, Bruno: 8 = 24/30

Johnny Weir and Britt Stewart dancing the rumba to “Reflection” from “Mulan.”

Judges Comments: Carrie Ann: “I believe in you so much and tonight watching you dance like that felt so good because I saw you make a transition from an ice skater to a ballroom dancer. You are using your feet and the floor. Just try to think up instead of down. It was epic.” Derek: “I just want to shout out to all the parents out there who sacrifice so much to fulfill our kid’s dreams, I love you all. That was beautiful, your arms, your lines, you have arrived on a straight leg. Well done.” Bruno: “Your shapes, your extensions are exquisite. I was really impressed because you started to project emotion. I could read that you were actually playing a character. Keep on that way because you’ve got everything.”  Judges Scores: Carrie Ann: 8, Derek: 8, Bruno: 8 = 24/30

Jesse Metcalfe and Sharna Burgess dancing the jive to “King of New York” from “Newsies.”

Judges Comments: Derek: “I feel like you didn’t feel as comfortable with this routine, timing-wise. There was a moment when you got ahead of the music, you brought it back. I didn’t feel this one as much from you.” Bruno: “I felt it big time, enthusiastic and youthful, you actually played the role brilliantly. I thought your footwork was light and nimble, but you were moving much better than you ever had.” Carrie Ann: “I agree with Bruno, you told the story brilliantly, I can totally see you on Broadway. Your musicality though was less than favorable, you have to tap into the music so we can connect with you.” Judges Scores: Carrie Ann: 7, Derek: 6, Bruno: 7 = 20/30

Chrishell Stause and Gleb Savchenko dancing the waltz to “A Dream Is a Wish Your Heart Makes” from “Cinderella.”

Judges Comments: Bruno: “The belle of the ball, you really looked like the ultimate Disney princess, gorgeous. I could feel the romance unfolding, that last moment killed me.” Carrie Ann: “I approve of princess Crishell, you were together, stunning, like magic together. Work a little on your shoulders, it hurts to see you do ugly lines. Other than that, well done.” Derek: “From rags to riches, you both are stunning. When you do turns, please make sure you keep your feet together, but this was a beautiful dance.” Judges Scores: Carrie Ann: 7, Derek: 7, Bruno: 8 = 22/30

Time for some results, it is going to be up to the judges to save one of the bottom two couples and keep them in the competition. Now, in no particular order, we are going to find out who is SAFE: Nelly and Daniella, Nev and Jenna, Monica and Val, Vernon and Peta, Chrishell and Glen, Kaitlyn and Artem, Jonny and Brit, Jesse and Sharna, Jeannie and Brandon, Justina and Sasha, AJ and Cheryl, Skai and Alan.

Anne and Keo, Carol, and Pasha.

Derek and Bruno vote to save Anne and Keo.

Carol Baskin is eliminated from the competition.