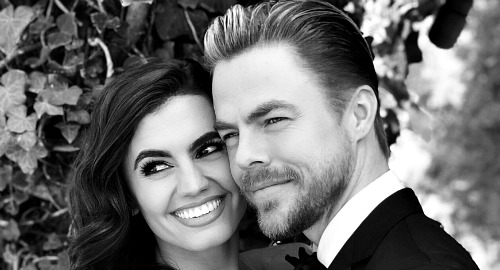 ABC’s Dancing With the Stars spoilers reveal fans are super excited that Derek Hough has returned and might be getting engaged The alum is the newest judge on the panel, but people just aren’t interested in his new gig. During a Q&A posted on both YouTube and Instagram, Derek went through what can only be described as an engagement interrogation. So, what did he reveal during the conversation?

DWTS spoilers reveal that everyone wants to know when Derek is going to pop the question to his girlfriend, Hayley Erbert. During the Q&A season, this is one of the questions that popped up. He was also asked what kind of ring he is going to get her.

However, keep in mind that he actually hasn’t even confirmed if he plans on proposing or not!

One other question that got everyone’s attention is if Derek is going to propose when he dances on the stage next week. It is already confirmed that Derek will actually dance with Haley. So, it’s only natural that fans are assuming that there is a very special reason attached to the upcoming event.

Is Derek Hough Going to Pop the Question?

Dancing With the Stars spoilers reveal that when asked all of these questions, Derek didn’t exactly give an answer. In a hilarious video clip, he nervously looked around. He also struggled to come up with an answer. Then, when the DWTS proposal came up, Derek intentionally redirected his attention to the family dog.

Most people enjoyed the video clip, but there are always those few individuals that must share their wisdom with the world. One person suggested that by the time Derek does get around to proposing, then Hayley might already be with someone else. Another told him that another man was going to end up getting his girl.

Then, there was the comment that suggested Hayley didn’t even really care. Someone else insisted that it “wasn’t a good idea” while another wanted to know why marriage is being rushed. However, there was actually a few people that understood that this video was for entertainment and thanked them both for the laughs.

What do you think is going to happen with Derek Hough and Hayley Erbert? Let us know what you think and remember to come back to CDL for the hottest Dancing With the Stars spoilers, updates and news.